Enjoy unlimited access to all of our incredible journalism, in print and digital.
Subscribe Now
Advertisement
Parks

Katy Trail Traffic Might Possibly Perhaps Go Down This Weekend

But you folks still need to be smart about your exercise and peacocking.
By Tim Rogers | May 1, 2020|12:14 pm
Advertisement

Last week, when the Katy Trail announced it would attempt to ease congestion by limiting usage according to alphabetization of surnames, I called the plan dumb. First, it’s unenforceable. Second, last names aren’t evenly distributed when you split the alphabet in half. Then, what happens if Jenny Adams and Mike Rodriguez, a married couple, want to go for a walk together? It won’t work!

Earlier this week, I checked in with Calvert Collins-Bratton, president of the Dallas Park and Recreation Board, to see just how right I was. Collins-Bratton patiently explained to me that, yes, they knew the rule is unenforceable, and, yeah, the alphabet thing isn’t perfect — but they had to try something. (She didn’t like my idea of letting me patrol the trail with a paintball gun and shoot anyone who doesn’t practice safe social distancing.) So then, how’d it all work out last weekend, and what might things look like this weekend?

Turns out I was sorta both wrong and right. Yes, last weekend traffic on the trail, compared to the previous weekend, went up, suggesting the alphabet thing was a bust. BUT, Collins-Bratton pointed out, it was down year over year. And weather wasn’t a factor. A year ago, we were in the mid-80s, and it was sunny and breezy. Does that mean the alphabet thing actually worked? Maybe. Possibly.

Here are some charts and graphs, for people who like that sort of thing. Here are last week’s counts from a robot counter stationed at the Fitzhugh intersection of the trail. (Note: that robot could be outfitted with a paintball gun.)

What you’re looking at below is an hour-by-hour breakdown of last weekend’s traffic: 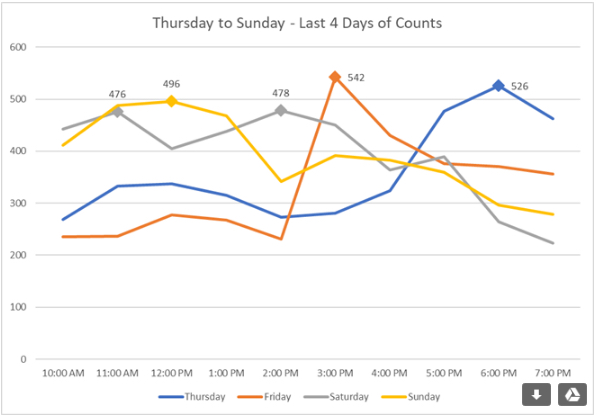 If trends hold, you’d be smart to use the trail today before that huge peak hits, and then use it later in the day tomorrow and Sunday. Collins-Bratton told me she thinks traffic will be down this weekend compared to last, seeing as how Gov. Greg Abbott is doing everything he can to up his body count. Kidding. Collins-Bratton didn’t say anything about Abbott or body counts. She just thinks that with malls and golf courses and tennis facilities and all the rest reopening, people will have other ways to spend their time than on the Katy Trail.

One more point: the Park Department is stationing more hall monitors (my term) on the trail this weekend. They will be armed with cattle prods (my dream).

Dallas’ most important news stories of the week, delivered to your inbox each Sunday.
Calvert Collins-Bratton Katy Trail

Are you up for playing real-life Frogger on Garland Road?
By Tim Rogers
For Fun

A Reminder: The Dallas Marathon Is This Weekend

The Mintwood Real Estate Founder reveals two factors as to why the multifamily industry is about to rapidly change.
By Ben Swanger
D Magazine Directories