The Dallas City Council on Monday got its first chance to question a proposal from the Texas Department of Transportation that would give control of some land under I-345 to a private developer who plans to build a fenced-in complex of five soccer fields.

Council members on the Transportation and Infrastructure Committee needled the deal. They questioned why they hadn’t seen a lease and why it was so difficult to see a site plan. They asked how the deal got done in the first place, considering the Deep Ellum Foundation’s failed decadelong journey to get permission to put parking under this section of the highway. They asked why staff was so willing to turn this land over when their department heads hadn’t seen a copy of the deal. They asked why a vote is planned for later this month when they haven’t been able to explain the projects to their constituents.

The questions poured out of Council members Chad West, of North Oak Cliff; David Blewett, of downtown and East Dallas; Adam Bazaldua, of Fair Park and South Dallas; and Paula Blackmon, of White Rock Lake. The deal is a complicated one. The land in question is owned by TxDOT but controlled by the city of Dallas. It is governed by what is known as a Multiple Use Agreement, or MUA. What can go on that land is narrow: parking and parks, unless the city gives up its control or the two parties amend the MUA.

That’s what city staff is wanting the Council to do. Give up control of the land for the soccer fields and have TxDOT amend the MUA to allow for the construction of nearby Carpenter Park, which, according to the city’s transportation director, will have some sort of structure that the current terms would not allow. The city is also hopeful that TxDOT will transfer control of a different parcel further south, on Martin Luther King Jr. Boulevard, where it would widen sidewalks, improve lighting, and take in a lane or two. Staff said those projects are all separate and can be considered one at a time, but they were negotiated together and that will need to happen again if Council wants to break them out piecemeal.

It appears that staff has been working unilaterally on these deals, away from the City Council. Which was a good way to trigger almost 90 minutes of questioning.

“I think that this is absolutely putting the cart before the horse and we need to get back to where these types of deals begin,” Bazaldua said. “That’s with the community and the stakeholders that are going to be impacted. I want to know why the interest for this location? With the amount of land the city of Dallas owns and the opportunity to have a successful partnership, why on earth does it have to be this land?” 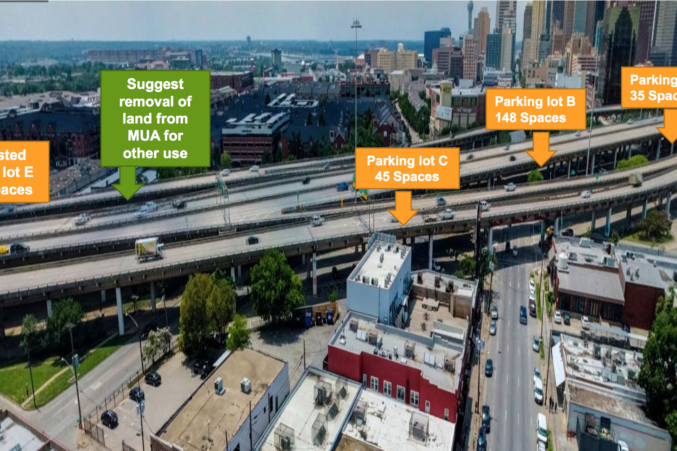 A visual representation of the land owned by TxDOT but controlled by the city of Dallas. The space in green is where Roddrick West wants to put his soccer fields. Lot E is where Deep Ellum wants its parking. (Photo courtesy City of Dallas)

The developer is Roddrick West, the son of state Sen. and U.S. Senate hopeful Royce West. He spoke of living in the Camden Farmer’s Market and walking to the restaurants on Commerce Street, past the blighted land under the freeway. He said he got the idea during his time living in Miami, when he would play under I-95 on the Stadio Soccer fields. He said he views it as a way to link Deep Ellum and the Dallas Farmers Market, to make it safer to go between. But Blewett made him admit that there would be fences around the soccer fields; it won’t exactly be like walking through a park.

“I love the idea of activating underneath the highway. But I don’t like fences,” Blewett said. “I want people to be able to walk and connect.”

Council members had a lot of concerns about the process. Jon Hetzel, the chairman of the Deep Ellum Foundation, said he was unaware of the process that West used to get TxDOT’s favor. Deep Ellum has been trying for years to turn the empty space under the freeway into parking. Under this deal, they got their 700-plus spaces—but it’s further away, on a lot closer to the Farmers Market than to Elm Street.

Roddrick West told the Council he “knocked on many doors and made many calls.” And because TxDOT is leasing the land, there was no obligation to put it out to bid. They wouldn’t reveal the financials because the lease is not yet finalized. Roddrick would not reveal his investors. Neither Assistant City Manager Majed Al-Ghafry nor Transportation Director Mike Rogers had seen the lease agreement, and it doesn’t appear anyone on the Council has seen the business plan for the soccer fields.

The future of I-345 itself is another matter. TxDOT in June is planning to release the results of a feasibility study that could include advocating for tearing the freeway out or burying it below grade, freeing up hundreds of developable acres. The project is still at least 10 years away, which led Transportation Chair and Council member Lee Kleinman to voice his support for the project.

Sen. Royce West has loudly voiced his opposition to removing the highway. Roddrick West, who says his dad had nothing to do with his deal, says there will be a two-year kicker that would require him to vacate the land once the I-345 project gets moving. TxDOT confirmed this, but none on the Council have even seen the lease.

“Trust but verify,” said Blackmon, who isn’t on the Transportation and Infrastructure Committee but questioned West anyway.

There remain a lot of questions for the Council. The record  vote is currently scheduled for May 27, and at least four on Council have indicated that they do not feel comfortable voting for it in its current state. Four more “no” votes and the deal is dead. Much of Council’s confusion came from the handling by staff, which had negotiated these deals without input from Council, many complained.

“I’ve never been this disappointed in city staff,” said Councilman West. “I have always been wanting to defend staff if they’re getting unfair criticism. I’ve been wanting to give staff the benefit of the doubt. I feel this is unacceptable today.”