I have barely interacted with people for the last 77 days. I’m immunocompromised and terrified of getting COVID-19. So, last night, I watched the protest from friends’ social media feeds. I wasn’t going to go out. The protest was peaceful for hours, with marchers heading from police headquarters in the Cedars into downtown. But that changed.

When we saw things escalating from our downtown apartment, we decided to step outside and look around. My husband and I made our way to Griffin where there were dozens of cops stationed. People were just milling about. After a few minutes, the wind shifted and my eyes immediately started aching and my throat tightened. I realized that I had received a tiny dose of residual tear gas, set off probably half a mile away. It was enough to make me turn around and head back toward Commerce.

There, we found the back end of the marchers. It was the section where protesters met police. Things were relatively calm. Folks were blocking off the roads. There was an occasional cup of liquid thrown. People were yelling and chanting.

Afraid of COVID-19 and still a little raw from the tiny amount of tear gas I received, we headed to our apartment overlooking Elm and Ervay.

We heard that Traffic and Forty Five Ten, two high-end boutique stores on Main Street, had been looted. We joined our neighbors outside.

Traffic’s windows had been knocked out and looted. Forty Five Ten’s windows had only been broken. There was a large police presence and people around. A group walked past us and one person complained about glass in his shoe. He took it off to shake it out.

We talked to a few neighbors, one who had just returned home and was caught completely off-guard. We headed home.

Things escalated quickly. Another round of looters came by, knocking out windows. It wasn’t until I saw the shattered windows at the Architecture and Design Exchange, a nonprofit that works to educate about architecture and where I’m the board president, that we decided to head back out.

We walked to the Republic Tower to assess the damage. I sent photos to the executive director. Building management was on their way.

We headed back toward Main. But we never got there.

We stopped next to Comerica as something sounded like it was being shot in our direction. People took off running. We hid on the stairs. When it appeared clear, we headed back toward Elm, which is the back entrance of our apartment building.

Once again, we were met with people sprinting in our direction. We ducked into our apartment garage entrance with several of the people who had been running. I asked one of the folks what they were running from. “The police,” he said. Then I noticed the lamps, shirts, and hangars many of them had in their arms. They had just looted Forty Five Ten.

We decided it was time to go home. 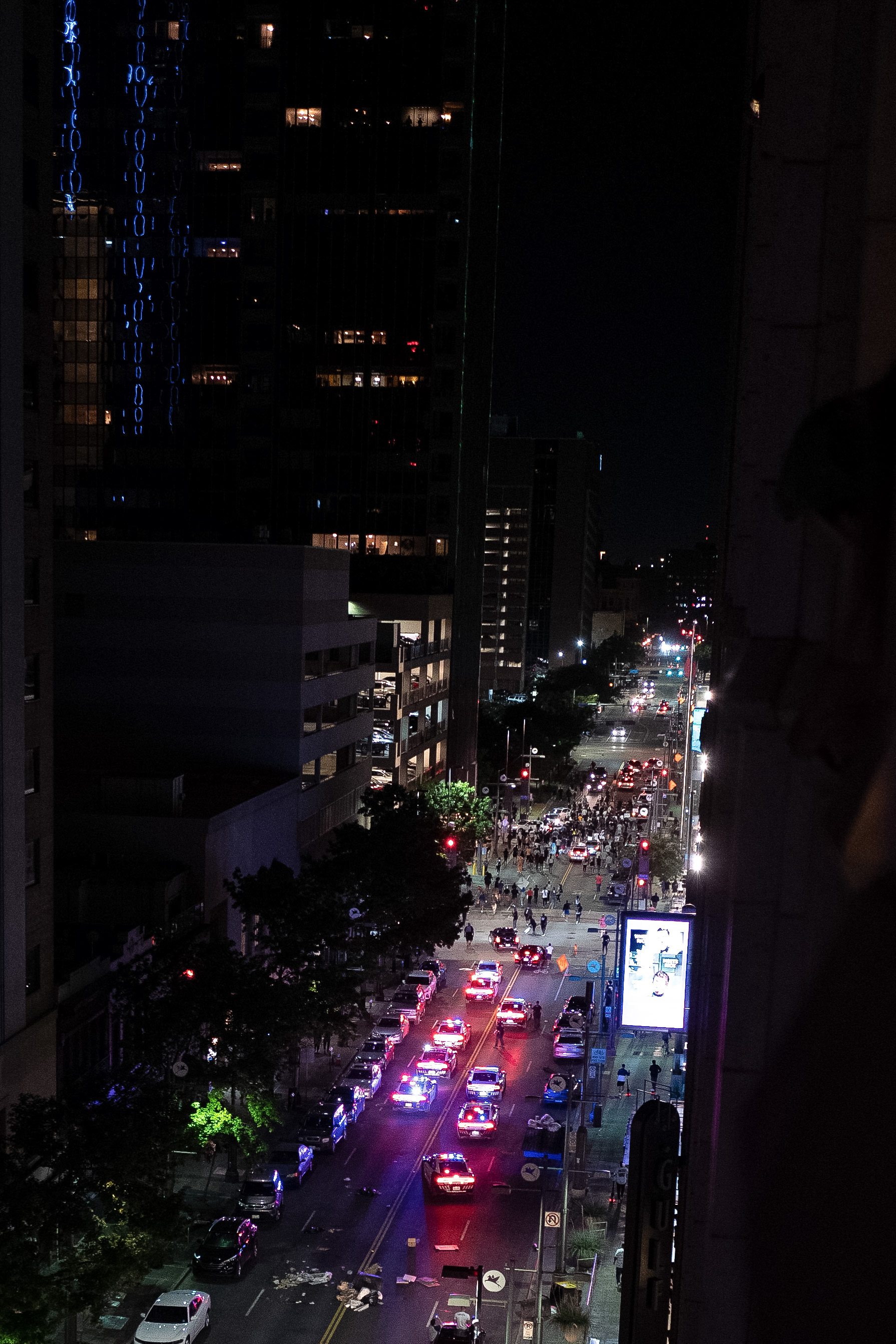 The scene from the top of Main and Akard before police deployed smoke bombs to quell the looting. (Photo by Chase Beakley)

We have two windows in our apartment that open, one overlooking Elm, the other overlooking Ervay. We opened both and spent the next hour going between the two.

We were watching the scene—police blocking traffic, traffic finding ways through, people walking around, more looting. Soon we noticed some action toward Main. All of a sudden, there was a bright flash right outside our window followed by a huge boom. I was recording. I said many curse words. It was, frankly, terrifying. This flashbang was quickly followed by another and another and another. This continued for the next hour.

We looked out our window on Elm and saw a group of SWAT, DPD, and an armored personal carrier vehicle spread out across the street. They were completely geared up and yelling through a bullhorn: Get off the sidewalk or get arrested.

They slowly made their way down the street, effectively shooing people away.

Neighbors texted asking if their businesses had been hit. A group started organizing to help with cleanup in the morning. I cuddled my dog, Reno, and we finally went to sleep. 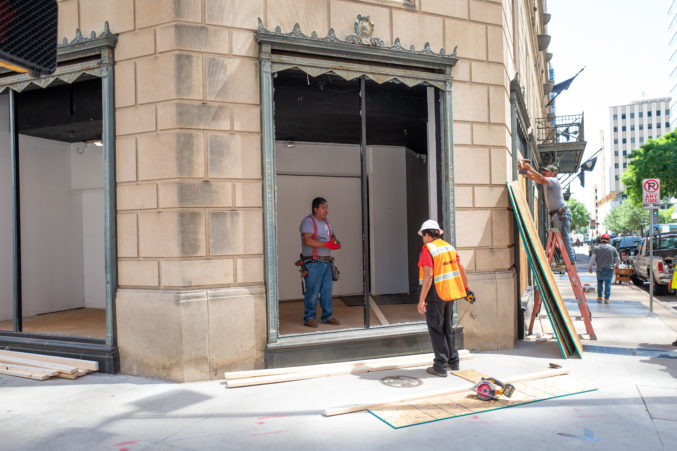 Crews survey the damage the morning after protests turned into looting in downtown Dallas. (Photo by Chase Beakley)

I walked out of my front door onto Main Street, expecting the absolute worst. And I was surprised.

Crews were already hard at work sweeping up glass and boarding up windows.

Downtown Dallas Inc. was out with supplies. Royal Blue was giving away coffee. Neighbors came out with gloves and bags and brooms and started assisting wherever and however they could. We had more help than we needed.

But there is also fear downtown today. One shop-owner cleaned out her entire store. Another paid a rumored $5,000 to board up their windows.

Last night, someone tagged the Eye Ball sculpture across from the Joule with the message “Now UC Us.”

This morning, it was covered up with what appeared to be tape.