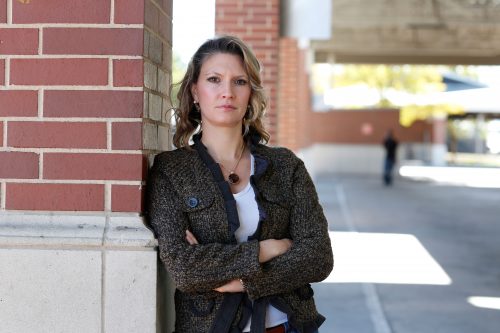 Vanessa Bouché is an associate professor of political science at TCU and has been studying the issue of human trafficking for more than a decade. We chatted on Friday about the state of sex trafficking in Dallas, how it has been impacted by the coronavirus pandemic, and how she is creating new employment opportunities for survivors. This interview has been edited for length and clarity.

What do you see as some of the biggest problems locally in terms of sex trafficking? Dallas definitely has a big problem. It spans the gamut from illicit massage businesses, to strip clubs, to trafficking of minors, to online prostitution. There is not an aspect of the underground sex economy that Dallas does not have and have in relatively large quantities

What impact is COVID-19 having on sex trafficking? First of all, for the illicit massage businesses, they’re all completely shut down because the state has said that massage businesses, whether licit or illicit, can’t operate. Now that being said, there’s been some analysis looking at the survivability of the illicit massage business after the coronavirus because they’re losing so much money right now. And then the question becomes, what are the workarounds that they’re finding? And apparently some of them, instead of being street-level massage businesses with neon signs, they’ve moved to apartment complexes or private residences, not in a place where it would be evident to law enforcement officers that they’re still operating.

How do you get your data? Is it coming from the victims themselves or is it coming from law enforcement? That came from a research group called Heyrick. They focus their energy on the illicit massage industry. I do some consulting for them, and I’m on the advisory council for the Dallas group. They sent out a survivability study that was a rapid assessment, if you will, and that’s what they had shown.

Have you also been looking at how minors are being affected? Yeah. I am actually on the board of Traffick911; they serve minors. So any minor that has been recovered by law enforcement, they come in and Traffick911 provides advocacy services for those kids. Traffick911 in particular has been talking about how the kids that have been recovered during this time, they have indicated that they are now being forced to do live interactive web-based videos.

Are undocumented workers especially at risk, now that they may not even be able to generate an income for the traffickers? In the illicit massage industry in Dallas, the victim workers, if you will, are adults and foreign nationals by and large. The illicit massage industry is very, very savvy about getting fake visas for the people that come in. And oftentimes the fake visas are under the guise of, well, sometimes it’s nursing and they’ll create fake nursing certificates. There have also been cases of getting visas on the basis of religious persecution. So, especially if this is someone in China, they’ll be like, “Oh, they’re Christian, and they’re being persecuted.” And they will concoct the story that the person will have to tell the consular officer when they get their visa. So some of them have legitimate visas but under fraudulent circumstances, and others have just straight-up fraudulent visas. And the thing is they don’t even know that they have fraudulent visas. They think they’re here legally.

How do you draw the line between sex trafficking and voluntary sex work? That is such a good question. And I struggle with that question on a regular basis, because there’s a big debate. The legal definition of sex trafficking is the recruitment, harboring, transporting, obtaining, or providing of a person for a commercial ­­sex act. That’s very, very broad. If you really want to scrutinize that definition, you can actually make arguments for how transactional sex and hookup culture in college is sex trafficking. If a guy transports a girl to a movie and buys dinner and then has the expectation of some sexual transaction — because the definition of a commercial sex act is anything of value being traded for sex — so the movie and dinner is something of value, and he’s had the expectation of getting sex because of it. That definition is so broad, and when you scrutinize it, it can apply to so many different things. Which is why we prosecute only severe forms of sex trafficking.

Part of the difficulty is that some women voluntarily engage in sex work, but others may choose it simply because it is the only way for them to make a viable living, because they may not have educational or other employment opportunities. That’s been one of your efforts, to provide alternative job opportunities for women. How did that start? In 2014, I started taking students to India on a study abroad for transactional human trafficking. And every time we go, we partner with the same NGOs. So it was during a 2017 study abroad that we were sitting on the floor of a medical clinic in the red light district in Delhi. And one of the women that was there said to me, “Why should I share anything about my story with you?” She said, “It’s people like you that come here. You act like you care. You act like you want to help us, but really you’re no different than the people that are exploiting us for our bodies. You’re just exploiting us for our story. And I heard that, and it really resonated with me. I could completely understand how she would feel that way.

But I said, “We brought you a lot of supplies and stuff like that that we think you might need, but if that’s not what you need or want, what is it that you need?” And she said, very emphatically, “I need dignified employment to get out of this.” And so I told her on that day that I would help her find that employment.

How did you follow through on your promise? I connected with dozens and dozens of companies that existed in other parts of India that are employing survivors all across the country, and nobody knew of anything in Delhi. So six months later, I decided that I would need to start something. What we decided to do was to form Savhera, an essential oil business. And the reason we decided on essential oils was really threefold. The first reason was that we wanted something that was deeply rooted in Indian culture and tradition. And essential oils are really rooted in the Ayurvedic healing traditions that originate in India. So that was one reason.

The second reason for essential oils was we wanted to do a health and wellness product that was consumable, because we felt like the whole purpose behind our company was to facilitate the restoration and wellness of women coming out of prostitution. And then the third criteria was we wanted to be in a market that was anticipated to grow on a trajectory over the next decade. So we decided on essential oil, and we hired our first survivor employees in Delhi in October of 2018. Now we are employing seven survivors in Delhi, plus we have two managers. And then we’re also employing one survivor so far here in the DFW area. And we’re getting ready to hire a couple more.

It’s a hard issue to work on. The hardest. When you’re constantly studying it, and constantly talking to people about it, and constantly teaching students about it, it kind of starts to feel like, man, I have nothing good to say ever, you know? But at the same time, I wouldn’t have it any other way. And now my involvement with Savhera, changing the lives of these women, has been hands down the most rewarding part of my work that I’ve ever done. I didn’t plan to start a business to employ survivors, but now that I’ve done it, it’s the most rewarding part of the work. Seeing individual lives transformed.

Cooper Institute Turns 40 and has a Spa Customer Appreciation Week