Joggers huffed and puffed and pattered past. Families with strollers ambled by, chattering. Children screeched by on their bicycles. Couples, arm in arm, cuddled on blankets or nestled in hammocks. A middle-aged man on a mountain bike asked his middle-aged male friend, also on a bike, “I wonder how many of these people would normally be eating in a restaurant right now, or at a bar.”

It was a fair question. White Rock Lake was abnormally crowded, so congested that Dallas County Judge Clay Jenkins tweeted, “a sober reminder that COVID19 is dangerous for everyone. Second, @whiterockdallas loop is too.” Jenkins elaborated in a follow-up tweet: “#SocialDistancingSavesLives Don’t breath [sic] the droplets of hundreds of people to exercise or on unnecessary trips.”

The crowds didn’t go unnoticed by vigilant citizens or Dallas Parks and Recreation, either.

“On Saturday, we received a record number of calls to City Hall’s Parks & Recreation department of overcrowding at White Rock Lake Park,” says Andrea Gates, the Dallas Parks and Recreation service area manager for East Dallas and Southeast Dallas. “We did not want to close parks and trails to the community. So, we put together a plan of, how do we decrease the amount of people going to White Rock Lake Park without closing it? So, we said, ‘OK, well, let’s stop vehicular traffic. Let’s close of some of the entry points and allow walkers with strollers and cyclists and skateboarders and rollerbladers onto the trail, to promote social distancing.’”

A departmental coalition of Parks and Recreation, Public Works, Parking and Code Enforcement, Dallas Police Department, and the Marshal’s Office closed parking lots at White Rock Lake Park. They mistakenly closed road access, too, such as exits from Mockingbird Lane to West Lawther Drive, but quickly removed the barricades. 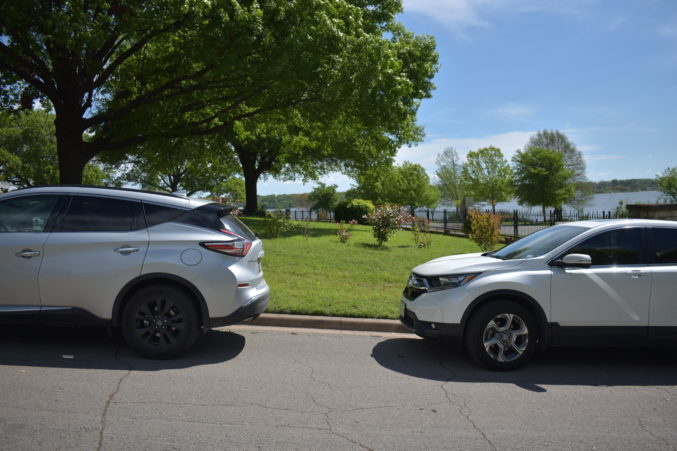 Closed parking lots at White Rock Lake are spurring drivers to leave their cars in nearby residential neighborhoods. (Photo by Trace Miller)

So far, the city has applied such vehicular restrictions only to White Rock Lake Park. The lake is not closed, nor are roads—only parking lots are sealed shut. Along with these new vehicular restrictions, Parks and Recreation released a list of “Dallas’ Best Kept Secret Parks,” found here. After all, Dallas does have 397 parks with over 20,110 acres of land and over 158 miles of trails.

“This allowed us an opportunity to promote parks in [a citizen’s] neighborhood, so they didn’t have to drive so far to get to White Rock Lake,” Grant says. “During this time, we would love for people to enjoy their local parks and trails that they may never have visited before because they just didn’t know they were there.”

When pressed for a possible date on which restrictions might be relaxed, Grant replied that she didn’t have specifics.

“We’re following the advice of local health officials, working with Dallas County, with Judge Clay Jenkins, so, we have to work closely with those officials to make a sound decision on when to open them,” she said.

In the meantime, get outdoors and enjoy the springtime weather. Just avoid jam-packed popular parks like White Rock Lake. Rather, at your neighborhood park or, even, on your neighborhood streets. And, of course, six feet apart.