The annual Point-In-Time count is out. Dallas and Collin counties saw a slight decrease from 2019, while unsheltered homeless went up.
By Shawn Shinneman | March 19, 2020|12:35 pm
Advertisement

Perhaps a little lost in the shuffle was this morning’s release of the 2020 Point-in-Time count, the annual look at homelessness in Dallas. The release usually happens at an event with hundreds of people. This year, for the obvious reasons, it was streamed live on YouTube, the numbers presented by Carl Falconer, head of the Metro Dallas Homeless Alliance. It offered a little bit of good news: After two years of rises, homelessness fell in Dallas and Collin counties last year by 1.4 percent.

As you can see, the strides were made mainly within the “emergency sheltered” category, which means there were fewer individuals at short-term shelters—places where you could go for a warm meal, a shower, some clean clothes, and a bed.

However, the area did not do so well in the category of unsheltered homeless, encompassing individuals who sleep outside and on the streets. One caveat here is that on the night of the count, the temperature was in the 50s, Falconer says, whereas it had been colder the previous couple of years, meaning more shelters would’ve been open to account for the inclement weather.

With that in mind, the city of Dallas was up 122 people within the unsheltered category: 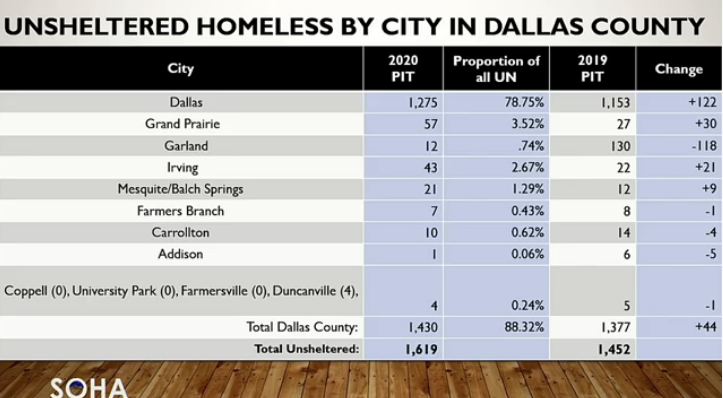 Falconer says that we should see this as hope and proof that some things in the community are helping. “But we’re not done yet, and some would say there’s a wave coming,” he said. “Some would say there are a lot of people out there in the community who could be homeless or are almost homeless at this point.” He flashed a few statistics from the Child Poverty Action Lab’s Housing in Dallas report: a minimum wage worker in Dallas will have to put 87 percent of their income toward a one-bedroom apartment; in 2016, there were 12 evictions a day; and the number of units renting for $800 or less declined by 42 percent from 2008 to 2018. And you can now add to that the new economic uncertainty stemming from COVID-19.

For Dallas to find long-term solutions to homelessness, it will need to stand up permanent transitional housing facilities that give people enough time to get back on their feet. The city has $20 million in bond money for that sort of housing. But using it has proved challenging for a few reasons, politics and NIMBYism among them.

“I think the No. 1 priority is creating units,” Dallas’ former director of the Office of Homeless Solutions told us earlier this month, not long after she left the city. “Whether it’s through our bond or through some of our other funding sources.”