The Dallas City Council on Wednesday extended its declaration of a state of emergency through April 29 at 11:59 p.m., deciding to give business owners a date they can point to—albeit a very, very precarious one—in which this might all be over. The vote passed 8-7, with the other Council members favoring an indefinite end point that would’ve granted Mayor Eric Johnson the ability to wipe the disaster declaration when he saw fit.

The move means restrictions on city life, as expected, aren’t going anywhere for several weeks. On Monday, the city shut down bars, gyms, and entertainment venues, and banned dining in at restaurants. It also banned events of 50 people or more. These prohibitions can be extended at any time, just as the declaration can. Dallas County on Wednesday banned recreational gatherings of more than 10 people and asked residents to call 211 if they saw a party happening.

“A recreational gathering is a gathering that is primarily for a social purpose – backyard barbecue, social event, pickup basketball game, or other gathering similar to that,” said County Judge Clay Jenkins.

Jenkins then announced that he asked all justices of the peace to block evictions for the next 60 days. “We can ill afford to have people couch surfing or homeless,” he said. The county also suspended all delivery hour restrictions to truck drivers headed for hospitals and grocery stores. He’ll ask the Dallas County Commissioners Court on Thursday to extend its own declaration for another 30 days. It currently is set to expire on Friday, a week after it was issued.

Johnson said at the Council meeting that the city would “try to keep our orders in line so that we’re not confusing our mutual constituents.” The regulations will likely continue to morph throughout the life of the declaration of emergency.

City Council will assess the emergency declaration after three weeks, on April 8, and take up whether to extend it further at its April 29 meeting. In a separate vote, the Council declared that all city boards, commissions, and task forces conduct their meetings telephonically or via videoconference. City Council meetings will go on, likely conducted via videoconference, as well.

Putting an end date on the emergency declaration spoke to part of the Council’s feeling that it would ease, to some degree, economic fears. Council member Lee Kleinman first asked for April 8. Johnson maintained he’d be “shocked” if anyone believed the city could come back in three weeks and clear the declaration.

“Indefinitely is reality, and we need to hunker down and adapt,” Council person Jaime Resendez said.

But Council member Paula Blackmon pushed the date further and narrowly secured the tallies. The vote was the final pin in a marathon City Council meeting that dragged on nearly 10 hours from start to finish, lengthened by the fact it was attended mostly by Council members remotely. Their trials with the video conferencing software played like a Saturday Night Live skit in the morning and like the conference call from hell by late afternoon. Here’s what we learned. 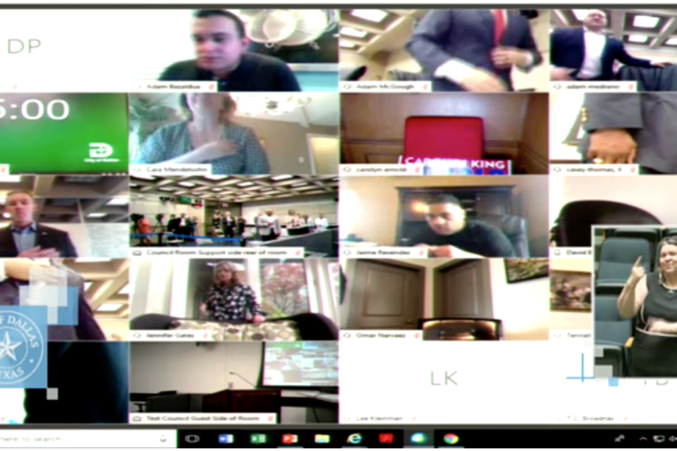 Dr. Philip Huang, the head of Dallas County Health and Human Services, mostly helped debunk transmission theories and addressed the testing situation in the county. The county lab has the capacity to test up to 160 people for COVID-19, the disease caused by the coronavirus. But it’s doing far fewer. Mayor Johnson lightly grilled him on why that was, especially considering the county is generally testing around seven people each day.

Huang said they’re being cautious. Currently, the county is prioritizing healthcare providers, first responders, individuals over 65, and patients having severe symptoms. They must have referral from their physician. There hasn’t been a disruption in the supply chain for the test kits, but the county is planning for it in case. You don’t want to have a situation where you can’t test a first responder, Huang said.

“We’re a significant fraction of what’s been done in the entire state,” Huang said. “Yesterday we reported 109 done in our lab. We’ve been maintaining it and keeping it up as it’s coming thru. It is a limited resource.”

The county is also operating off the CDC’s guidelines that healthy, younger people not experiencing severe symptoms can isolate at home for 14 days. You are considered cured if your fever is gone for 24 hours without medication, proven by separate tests. But there was still frustration. Council member Jennifer Staubach Gates, of North Dallas, continued the mayor’s line of questioning and received similar answers. Council member Casey Thomas, of southern Dallas, said “a prominent member in the community” contracted the virus but couldn’t get tested. Most who questioned Huang said constituents were confused about the testing and they wanted to know what to say.

Help at least appears to be coming. Parkland opened a drive-thru testing facility earlier this week. The county said two more are opening: one in parking lot E of the American Airlines Center and another at the Ellis Davis Field House in southern Dallas. They’ll each be able to test 2,500 per week, but they’re also following the county’s guidance in who gets tested.

The best way to get tested will be through private labs that fulfill after a doctor’s referral. Huang didn’t know how many were available here, but said their coming online “exponentially increased” testing capabilities.

We’re believed to be somewhere between five to 10 days behind having an accurate count of who has the virus—making it incredibly important to stay away from other people.

The big concern is a run on our healthcare system. Do we have enough beds, ventilators, staff? Huang said he’s been in constant contact with Dr. Mark Casanova, head of the Dallas County Medical Society. He didn’t speak to the specifics of equipment availability, but instead said this: “The hospitals have been preparing. They are preparing. They have plans in place. What we’re trying to do is slow this down; the numbers we’re seeing are within what the current estimates are.”

There were lots of questions about this. Does it linger in the air? (No, you catch it through the droplets of infected people, either through coughing or sneezing or you didn’t wash your hands after touching an infected surface.) Can pets carry it? (Doesn’t appear so.) Can clothes carry it? (Doesn’t appear so.) Are porous surfaces still a risk? (Clean everything.) Is hand sanitizer actually sufficient? (Yes, but only if you don’t have soap and warm water near you to wash your hands for 20 seconds.) Huang referred everyone to the CDC’s recommendations.

They’re being asked to stay six feet away from people if at all possible. If one is exposed, the city is working on temporary tents at the convention center for their immediate care. Longer term, they’re in talks with hotels to reserve blocks of rooms for longer-term isolations.

And other public agencies.

Dallas ISD will meet next week to pass a resolution to pay hourly employees while school is out. The district sent students home with their “1-to-1” devices, meaning laptops or tablets. But the challenge will be ensuring they have access to internet because, based on information from the Dallas Federal Reserve Bank, about 40 percent of student do not. That would equate, the district says, to about 25,000 students in grades 6 through 12, and the district has secured 13,000 hotspots already. That leaves 12,000, and it’s asking the Dallas Education Foundation for help.

DISD will also open up all neighborhood secondary schools from 10 a.m. to 1 p.m. on Mondays and Thursdays for food services, and to allow students to use technology, Hinojosa said. Parents who arrive with their students will receive a meal bag that can last three days.

The district is working to make sure that students aren’t penalized by the situation, although he said specifics about graduation requirements were still being worked out. “This has been traumatic for everyone involved,” said Hinojosa. “It does not look like we will have school again anytime in the near future, but we will reassess that every three weeks.”

DFW International Airport CEO Sean Donohue told Council that he anticipates international travel to continue to significantly decrease. That being said, as long as there are flights, there will be hourly workers staffing concessions. Donohue also said that concession rents had been dropped. In all, 10 people “had been potentially identified as having the virus,” but they all tested negative. He said the lines of hundreds of travelers packed in next to one another waiting to go through Customs was due to a last-minute policy change that they were unprepared for. He called it an “unacceptable situation,” but the federal government mandated “enhanced screenings” of individuals returning from abroad and the process was moved to paperwork. Donohue said those changes made the typical wait jump from 1 minute per person to 9.

Dallas Area Rapid Transit president Gary Thomas reported declines in ridership for both buses and light rail. Buses have seen a drop of about 50 percent since the onset of the coronavirus pandemic here. Light rail is down by 25 percent. In all, the agency is averaging 71,000 daily light rail trips and 78,000 on the bus. The red and blue lines are being cleaned and disinfected once an hour. The orange and green line trains get that same treatment every 90 minutes. Bus drivers are supposed to be wearing gloves and are disinfecting the buses multiple times a day.

And a Final Note. 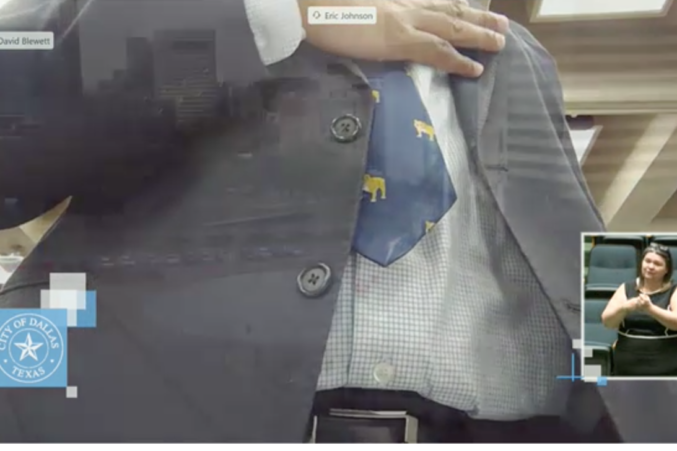 Dallas Mayor Eric Johnson says the pledge of allegiance to a webcam.

The Dallas City Council could’ve used a walkthrough before trying to stream its meeting. This morning was the first time the full Council has met since Mayor Johnson closed bars and gyms and other public places under an emergency declaration.  The technology was … lacking. Voices frequently dropped out, making the meeting difficult to follow. There was user error; it took an hour for each of the members to figure out that they should mute their microphones as to not create feedback. But it was a successful model of social distancing: everyone in the chambers was at least six feet apart, and about half of the Council were at home.