Dallas’ poorest ZIP Codes have the county’s fewest cases of COVID-19, the disease caused by the novel coronavirus. The distribution map of positive cases even resembles the redlining map of 1937, which the federal government used to block banks from issuing loans to residents living in large portions of Dallas, particularly in the south. Those neighborhoods don’t have as many cases as the ones that were green-lined, potentially indicating a lack of testing.

Community leaders and top public health officials fear that the remnants of these decisions—the lack of high-paying jobs and inadequate healthcare services, in particular—are affecting the testing rates for these individuals. They worry the disease is lying in wait in the city’s poorest communities, which struggle with transportation and are less likely to be insured than more affluent ZIP Codes.

“I’m requesting more testing,” said County Judge Clay Jenkins. “You are seeing more testing in the north because there are a lot more hospitals and access to medical care, a lot more people who have insurance and have a regular doctor and are going there for testing.”

As of Friday, there are 367 confirmed cases in Dallas County. Most of the proven concentrations of COVID-19 are north of Interstate 30, clustered in the higher income neighborhoods above downtown. We learned yesterday that 75225—a portion of University Park and a large chunk of Preston Hollow, including many older residents who live near Preston Center—has between 13 and 17 cases, the most in the county. Its neighbor in 75230, the rest of Preston Hollow, has between nine and 12. All but three ZIP Codes that have more than four cases are bunched around those neighborhoods, not far from the American Airlines drive-thru testing facility that opened last weekend.

The only ZIP Codes in the south with at least nine cases are 75208, North Oak Cliff including Kessler Park and Bishop Arts near Methodist Hospital, and 75115 in Duncanville just south of Red Bird, near where the drive-thru testing facility at Ellis Davis Field House is available. Cockrell Hill’s 75211 now has between five and eight cases. Oddly, Ellis Davis’ 75232 has none.

“My concern is that when you have a lack of testing in a certain area or community, it gives a false sense of security,” says the Rev. Dr. Michael Waters, the head pastor at Abundant Life AME Church in Dolphin Heights, just east of Fair Park. “I have seen persons who have shared that map online, shared it on social media with a point of jubilation, saying, ‘well look! We only have one to four people who have been confirmed. We’re doing a great job. Unfortunately, we know that’s not true.” 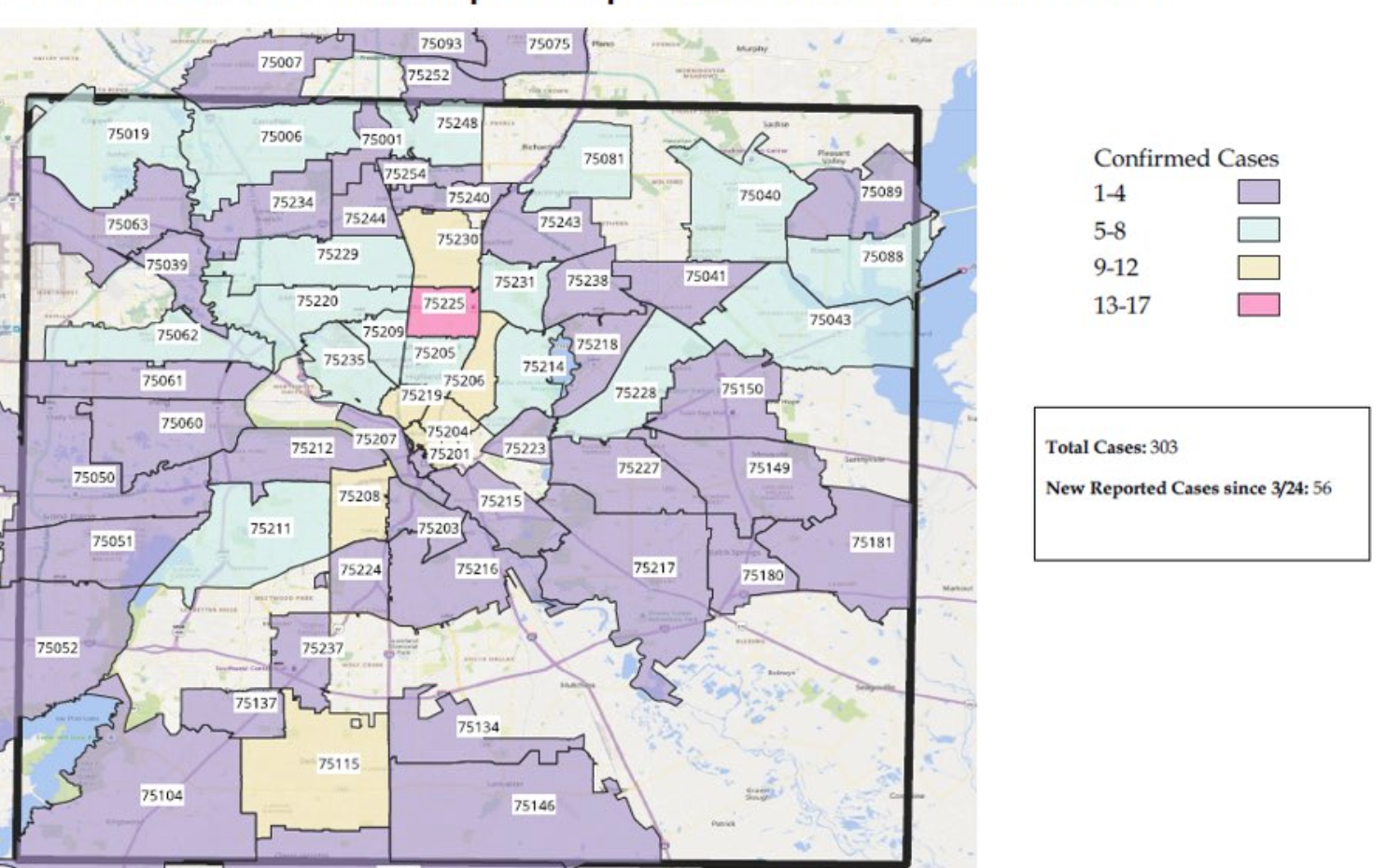 Like its neighbors, Abundant Life’s ZIP Code, 75223, has between one and four cases. Waters is concerned for his community. In 2017, the University of Texas system studied life expectancy by ZIP Code. They found that many of the ZIPs that currently sport lower positive tests have the lowest life expectancy in the county. The difference was as much as two decades. South Dallas residents (current COVID cases: one to four) lived an average of 63.6 years. Uptown residents in 75204 (current COVID cases: nine to 12) were living until 90.4, the highest in the city.

The determinants for life expectancy are the same determinants that could make controlling the spread of coronavirus difficult in these communities. The poverty rate is higher, meaning those with jobs deemed “essential” in the county’s shelter in place order are probably still going to those jobs. Transportation challenges are greater, making it difficult to physically get to a testing site. And the uninsured rate is higher, eliminating a family doctor that can help steer them to tests.

“I want to temper myself, but this is what I expected, this has been my fear,” Waters says. “The old saying that when white America catches a cold, black America catches the flu? Well if white America now has the coronavirus, what does that mean for black, brown, marginalized and poor communities in our society? It’s always worse.” 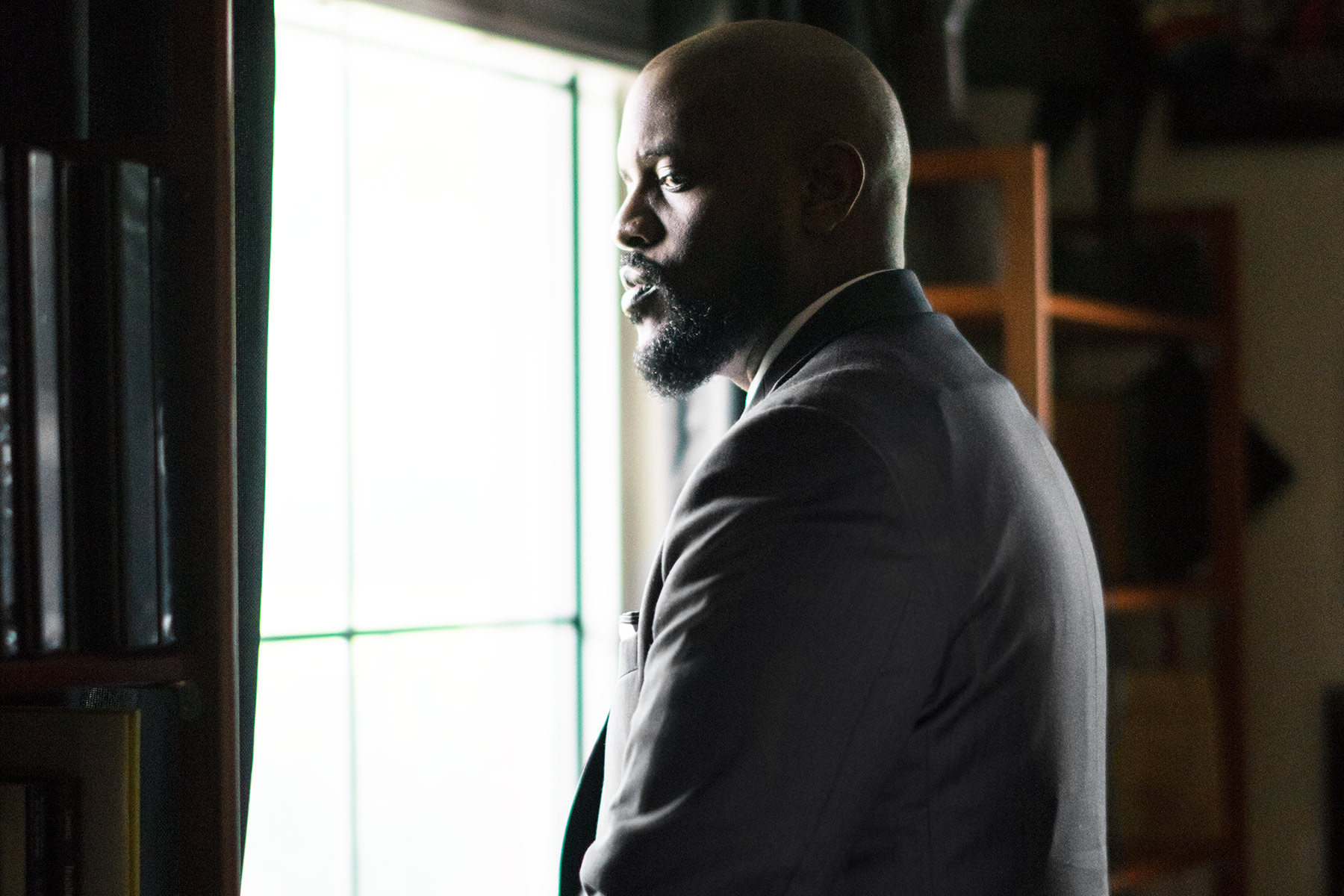 Currently, the two drive-thru centers can test up to 500 people a day, 250 at each. The county’s lab can do 160 a day. The American Airlines Center location—which is housed in the Uptown ZIP Code with the city’s highest life expectancy—has run out of tests by the afternoon. Ellis Davis Field House, in Red Bird, has exhausted its tests twice. As of this writing, there have been 1,200 fewer visits to Ellis Davis and about 300 fewer tests, although the Red Bird testing site opened a day later. Jenkins noted that the population is higher in the north, just as more hospitals are concentrated in the Medical District, the Baylor Scott & White campus in East Dallas, and points farther up Central Expressway.

Private labs are testing as well. MD Medical Group, which treats Medicaid patients and is a presence in many low-income ZIP Codes, has established six drive-thru centers through Dallas-Fort Worth. They can each test 300 per day, and include locations in Pleasant Grove, on Bruton, and Oak Cliff, near Kiest Park. Waters believes initiatives like that will be key to getting an accurate representation of the virus’ spread in ZIP Codes that are lagging in testing. There is no publicly available database of the ZIP codes of individuals who have been tested, only those who have tested positive.

“Having a testing site at the Fair Park as an example, that would at least create an opportunity for persons in the community to access that location more easily,” Waters said. “The virus has likely spread much further and impacted many more people who are having symptoms or who are not, who are asymptomatic. And because of the nature of many of the workers in these communities, many are working jobs that are still perceived to be essential jobs. … It is imperative that any and everybody that needs to be tested receive the testing that they need.”

Socially, Waters hopes this is a wakeup call. The virus is highly contagious, and all neighborhoods in the city—and the state and the country and the world—are fighting it. He says the limited testing lays the inequities in the city bare and can no longer be ignored.

“At some point in time the pandemic will end and we’ll get to the point where we need to rebuild our cities, rebuild our economy,” Waters said. “As we are going through the business of constructing a new Dallas, my question is: will we construct one that has room enough for everybody at the table?”

Editor’s Note: This version of the story added additional details about ZIP code 75225.