The gun shops of Dallas County have been overrun.

Through a couple of trying weeks, that simple fact may be the darkest slice of excessive buying in the face of this pandemic. County Judge Clay Jenkins has said repeatedly that there is no problem in the supply chain that would stress our inventory of, say, toilet paper, so long as people buy how they normally buy. People stockpile anyway, so this weekend, Jenkins officially limited TP sales to 12 rolls (or however many are in the package, if it’s more) per customer. And now, apparently, not only do some believe there may indeed be a lasting shortage of grocery goods, they’re arming themselves to protect their stashes of food and whatever else.

Monday is the last day before all but Dallas’ most essential businesses (gun shops: not on the list) shut down. But for days, the lines at gun stores around Dallas have been out the door. At popular West Dallas shop Ray’s Hardware and Sporting Goods—which appears set to reopen Tuesday—most people in line were either first-time buyers or existing gun owners seeking ammunition, management says. Same at The Gun Zone in Mesquite. Same story in other big cities across the country.

“They’re telling me stories where people have been taking stuff out of their basket in grocery stores,” says James Sneed, who owns The Gun Zone. “I think they’re scared there might be looting or, I don’t know, robbing.”

Sneed has been doing this a long time. He has never seen a boom like the one on his hands right now. There was a bump when Barack Obama was elected president. Others after rhetoric heated up following various mass shootings prompting, in particular, a run on ARs. Not like this.

“It starts at 10 in the morning and we have to turn them away at 7:30 at night, tell them to come back tomorrow,” says Sneed, who was speaking over the phone a little after 9:30 a.m., cars already in his parking lot. “Never seen anything like it.”

Those other spikes were about fear that guns would be governed away. This is apparently driven by fear for safety, protection.

What the coronavirus outbreak will do to crime in Dallas remains to be seen. Council member Paula Blackmon said on EarBurner Friday that she could see the city’s unemployment rate climbing to 20 percent. A quick Google search turns up one scholarly article after the next trying to determine what exactly that means for crime. Fast Company broke down one of the more recent studies, which shows a group of one million laid off Norwegians were 60 percent more likely to commit property crimes like theft or vandalism the year after losing work. It quotes a co-author who says that due to Norway’s social safety net, “both the income and psychological effects of job loss are likely more severe in the U.S.”

Meanwhile, already two Dallas PD officers have come down with the coronavirus, and the department has pledged to take some reports of lower-level offenses over the phone. 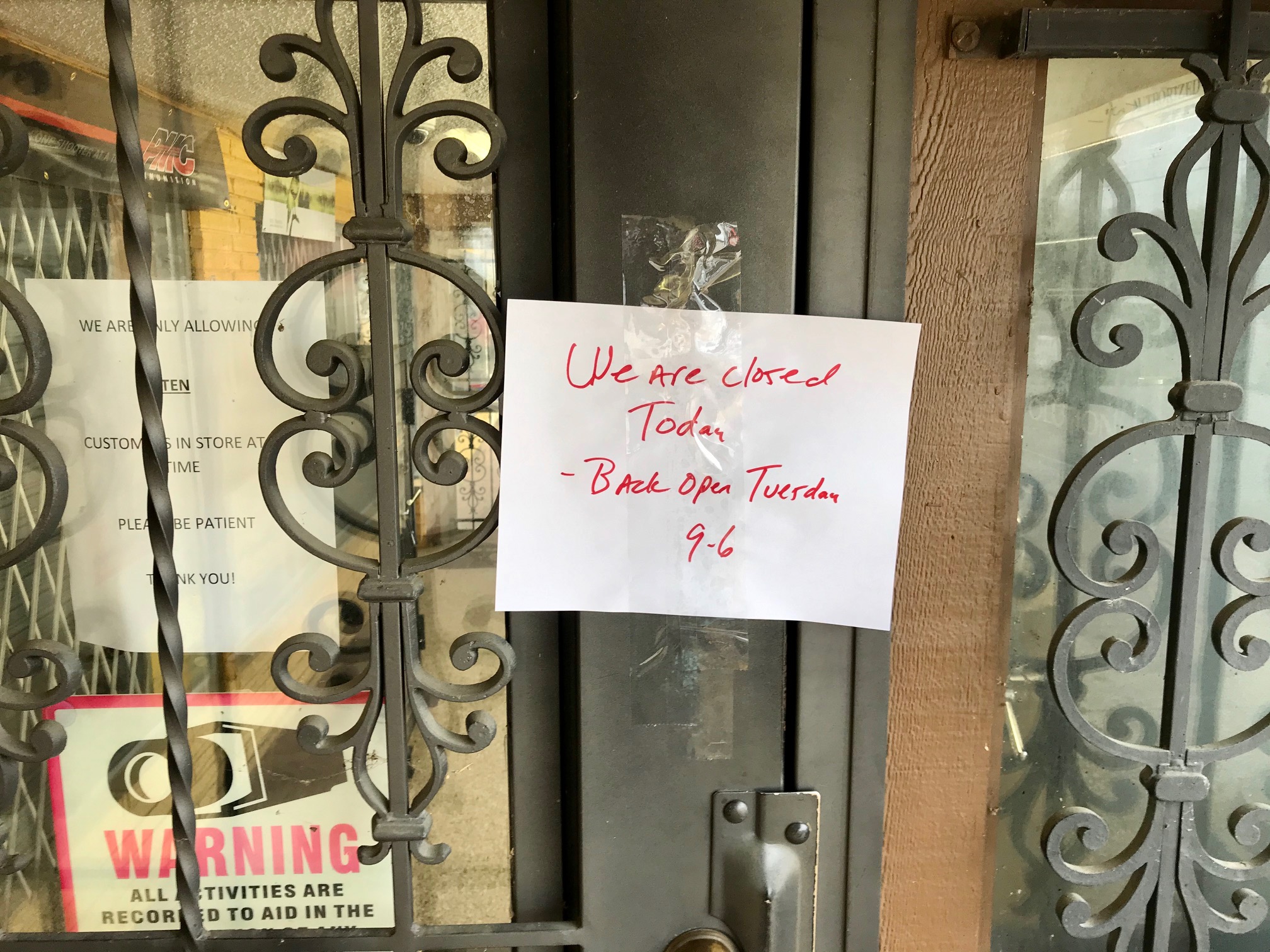 Dallas County deemed gun stores non-essential, meaning they’ll have to close starting Tuesday. But this sign was on the door at Ray’s on Monday afternoon.

At Ray’s, on Monday, a sign on the door read that the store would be back open on Tuesday. Lauren Trimble, Jenkins’ chief of staff, says that although gun stores must close indefinitely, stores otherwise classified as essential can still sell guns—Walmart, for instance. Jenkins’ order says hardware stores are essential. At least online, Ray’s doesn’t present itself as much other than a gun shop. But perhaps the store considers itself excepted from closure.

“If we see that there are a bunch of different businesses trying to find a loophole, that’s certainly something we’ll address,” Trimble says.

Ray’s could not be reached for comment on Monday. Management did answer a call late last week. Store Manager Chuck Payne says they’ve been letting in just 10 people at a time. They are putting out set amounts of ammunition each day and limiting purchases to one box per customer. Payne says all the supply lines are empty at this point. Major wholesalers have run out of 9mm, .380, .40, .45, and .223/5.56 ammo, he says.

Among his customers, he’s seeing the same fears expressed by Sneed.