The troubles were the result, according to County Judge Clay Jenkins, of inexperienced election workers, new equipment, and high turnout. Let’s focus on that last one.

It’s possible, of course, that people who were not able to vote due to machine issues early in the day came back after work, causing delays well into the evening. But the real story here is in the party splits. With the exception of 2008, turnout among Texas Democrats was better than it had been in nearly three decades:

Turnout in the 2020 Texas Democratic primary was the best since the early 1990s (other than 2008, which probably always should get an asterisk). #txlege #SuperTuesday pic.twitter.com/CTAj0Yk7Ye

And in Dallas County, we clearly see that shift, as well. Turnout in the Democratic primary was closer to 2008 totals here than it was 2016. A look at the last four years: 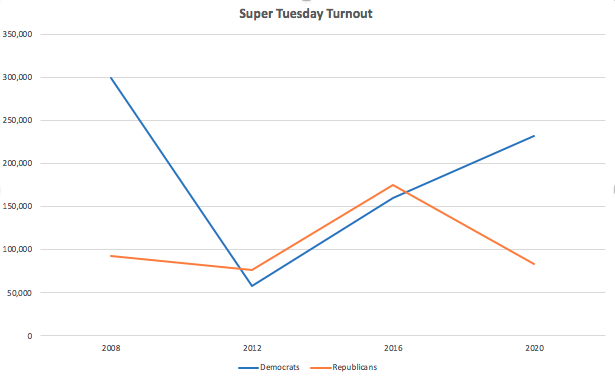 The number of Dallas County voters during the presidential primaries since 2008.

Michael Li, who wrote that tweet above, is the Dallas-raised Senior Counsel at the Brennan Center for Justice’s Democracy Program. He points out that Democratic turnout topped 15 percent in Dallas County for the first time since 1992, when you set aside 2008.