As the infamous wrecking ball continues to tap away at the Leaning Tower of Dallas, Jerrel Sustaita is there to paint its progress.

Since last week, the Dallas artist has stood before his easel outside the slanting building, painting acrylic impressions of the scene. The stubborn shaft of the former Affiliated Computer Services tower near CityPlace is all that remains following the rest of the building’s implosion more than a week ago. On Monday, Lloyd D. Nabors Demolition began using a wrecking ball to knock it down. Days later, it still stands. Initial estimates had it crumbling by noon on Monday.

It’s become a strange bit of folk art, attracting eager selfie-ers and dancers and costumed fans. The Richards Group on Tuesday night briefly projected an ad for Choctaw Casino—“HAVE BETTER LUCK WITH US,” it read—and someone on Wednesday projected an image of the Leaning Tower of Pisa. And each day, Sustaita sets up his easel and gets to work.

Some of his most recent work was part of an exhibition called “Selfie Nation” at the Dallas Public Library. He said he broadcasts his artwork each day via Instagram or Facebook as a Bob Ross-esque tutorial, explaining his color and brush choices as he paints.

Sustaita usually paints outdoors, drawing inspiration from urban landscapes and the people who interact in them. He said he loves showing up to local scenes like this one to capture the moment (or in this case, week) on canvas. When the Robert E. Lee statue was removed from Oak Lawn Park last September, Sustaita was there, painting the general being booted from his plinth.

“That’s what I love doing,” he said. “I love showing up, making a painting, meeting new people and just sharing my artistry that way.” 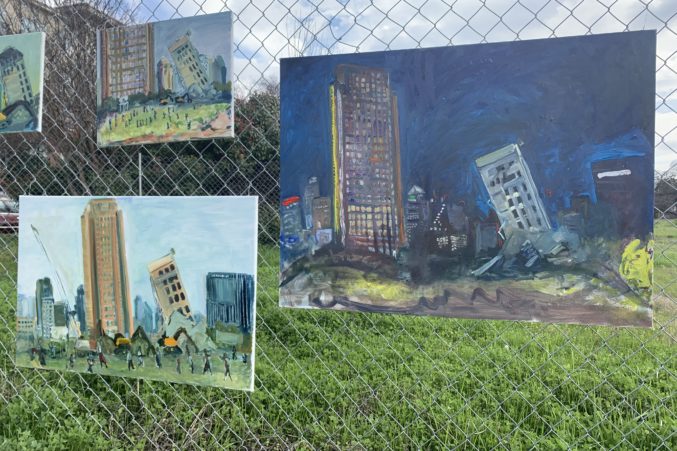 Jerrel Sustaita now spends his days recreating the scene of the Leaning Tower of Dallas near CityPlace. (Photo by Cecilia Lenzen)

He said it’s been fun watching people show up to see the leaning tower for the first time, not really knowing what to expect. By the time they pull out their cell phones and cameras, they’re laughing and giggling at the oddity of it, he said.

Oak Lawn resident Cyndy Delgado and her mother Enedina Rivera visited the tower for the first time Tuesday. She said she watched the tower’s news closely on Facebook, but once she realized that it would stand for a few more days, she went out like everybody else to take a picture at the pop-up tourist spot.

“It’s been really cool to be a tourist in my own city,” she said.

When Sustaita sees people like Delgado and Rivera laughing and snapping pictures in front of the tower, he incorporates them onto his canvas.

“I’m not real creative, I just see things and recreate them,” he said.

He’s stood outside painting since the first day of the tower’s failed implosion, sometimes just for a few hours. Working out of the back of his Ford truck, he taps his toe to electronic music as he paints. Once he finishes a piece, he hangs it on a chain link fence to dry and for tourists to view his art.

“It’s like an open reception for me,” he joked.

Henderson resident Taylor Nicholson said she never imagined seeing something so bizarre as the Leaning Tower in a city as big as Dallas. She works in the power tool industry, and she said it’s been entertaining to watch the wrecking ball slowly whack the building. After walking by his miniature art gallery on the chain link fence, she said she loves that Sustaita chose to document the event through his art.

When the tower finally falls, Sustaita will move on to another project, but he said he hopes his miniature art exhibition will find its way into a museum gallery. Although he’ll be printing copies of the paintings for sale, he said he wants the original pieces to remain together as a testament to the historic Leaning Tower of Dallas.

“I’m not really interested in a situation where people buy it and take it off the wall,” he said. “I’d like it to stay up for a little while just for people to reminisce.”

As much as he enjoys his current project, he said with a laugh that he hopes the tower falls soon, so he can go back to his work remodeling and painting interior drywall.