A year ago at this time, Eric Johnson was a month into his surprise bid for Dallas mayor, courting deep-pocketed Dallas donors on his run to City Hall while keeping one foot in the state’s capital during the 85th legislative session. On Friday he was back in Austin for a conversation that similarly straddled the two worlds.

Johnson spoke with Texas Tribune CEO Evan Smith as a part of the nonprofit news organization’s series of discussions with influential people across the state. You can always expect, from the whip-smart Smith, a line of questions that peer broadly across the political spectrum. And here, we saw Dallas’ story contextualized within state and federal frameworks.

At times, Johnson himself pulled in other levels of government. At others, when there were opportunities to dive into the nitty gritty of some of Dallas’ key issues, he came back around to his own points of emphasis. A discussion about housing affordability circled back around to workforce development, the thing that became his main talking point on the campaign trail a year ago.

“There’s another aspect of housing affordability that gets lost,” he told Smith. “Which is, what’s unaffordable at one salary level becomes affordable at another.”

During the hour-long conversation, Johnson and Smith touched on homelessness and housing, the role of cities inside the context of state and federal government views on them, the mayor’s reluctance to endorse political candidates, guns, and the coronavirus.

Things started with the topic of the day. Smith tried to gauge his guest’s sense of worry over COVID-19. Johnson had none. He urged the Dallas populace to stay home if they felt sick and to wash their hands and, unrelated, to maybe get a flu shot. Having faced the Ebola crisis, he said Dallas is ready. Johnson didn’t bite when Smith asked whether he believed the city is receiving good information from the Centers for Disease Control and Prevention. President Trump has been heavily criticized for his response to the virus’ spread. “We have no reason to believe that it’s not accurate,” he said.

Smith tied the issue to a quote from Rahm Emanuel’s new book, in which the former Chicago mayor pumps the growing importance of cities and their mayors, contrasting the federal government’s distance, dysfunction, and indifference with the intimacy, impact, and immediacy at the local level. “More and more responsibility is certainly falling on cities in terms of leading on the issues of the day,” Johnson agreed. “Because we’re not getting the response we want out of Washington and even some of our international bodies.”

“There’s never been a higher percentage of citizens that live in our cities,” he went on. “It’s just where our people are. And it’s just where the economic activity is.”

Later, Smith asked the mayor about the limits of his own power within Dallas’ city manager form of government. Johnson said that he “would not say no” to more responsibility, but that he doesn’t feel the city is ready for a referendum on the topic.

“There’s one person that the people have actually put there—all of the people. Everyone else is either representing a sliver of the city or as an appointed or hired government employee,” he said. “So there are times when there is a gap between that vision of the mayor, which is really derived from what the people want, and what the government employees in the city manager’s office want. It’s hard to reconcile that quickly and efficiently.” 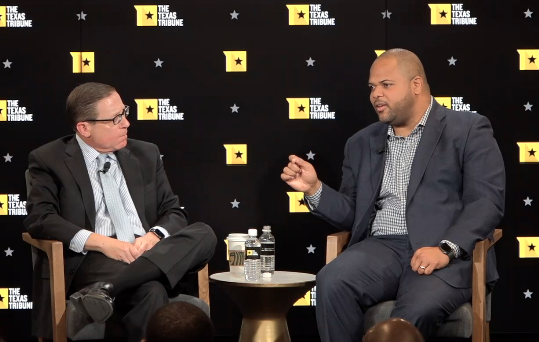 Smith dovetailed Wednesday’s shooting at a Miller brewery in Milwaukee into a conversation about gun regulation, something we don’t often hear mayors discuss. Johnson said that we should do a better job keeping guns from people who have no business getting access to them. “We are in Dallas right now dealing with a surge in violent crime, and it’s driven by guns,” he said. “And the guns are falling into the hands—many, many times, we are finding—of folks who should never have been able to get access to a gun.”

Smith read Johnson a list of unflattering statistics on homelessness, including the point-in-time readings from last year that showed homelessness in Dallas and Collin counties increased by 9 percent from 2017 to 2018, and that Dallas’ homeless population now outstretches Houston. Without providing any evidence to the contrary, Johnson said he did not “know if those statistics are 100 percent accurate or not,” but agreed that the issue has intensified. He said that he has worked to de-silo homelessness from housing; indeed, he combined the two into a single committee. He mentioned that the city will be figuring out “as quickly as possible” how to spend the $20 million in bond money that is earmarked to build homeless housing but is so far unused, because finding deals that sit in the right neighborhoods and don’t ruffle the wrong feathers has proved a giant task. The “as quickly as possible” ship has sailed.

“As far as what accounts for that increase, it’s something that is confounding to a lot of us because Dallas’ economy is doing very well,” Johnson said. “We have a very robust ecosystem of homelessness prevention and homeless service providers. Every now and then something defies statistics and you don’t understand exactly what’s happening, but you have to attack it.”

Smith saw an open door to the city’s skyrocketing housing costs; only in Austin, Denver, and San Fransisco have home prices grown more than here in Dallas, where they shot up 42 percent from 2006 to 2018. There was an opportunity here to talk about the city’s underutilization of housing tax credits, or the parking restrictions that ensure single-family neighborhoods don’t densify, or to show understanding of the city’s move toward incentivizing development in areas where individuals will have access to better jobs and resources.

But Johnson stayed very high level. He made only glancing mention of the city’s comprehensive housing policy, developed in 2018 and, in many ways, still getting its feet under it. “It’s not just affordable housing. We have to build more of that,” he said. “We’re working on trying to issue a bond and trying to figure out other ways to fund a housing plan to build 20,000 more affordable housing units in the city.” But the city also had to focus on developing a workforce that could afford higher priced housing and providing better transportation options to all areas of Dallas, he said.

Finally, as the discussion concluded, Smith tried to nail the mayor down to endorsements in the presidential race. Would Trump be a good president for Dallas over the next four years? “He could be.” Would Bernie? “Could be.” Biden? “He could.” Bloomberg? “Yeah, he could be.”

“Anyone in that office could be of help to us,” he said. “And I don’t think we advance the cause of Dallas by throwing darts at people who we might need to go to for something like a tornado recovery, that we’re still waiting for.”

Johnson offered that he is “very close personally” with Royce West, but he ultimately gave the same reason for staying out of the U.S. Senate race. And the former Democratic state representative would not say if it mattered whether Republicans or Democrats control the Texas House.

“For Dallas, the more relevant distinction is not between D and R,” he said. “It’s between those who think cities are the economic engines of our state and are places where we are seeing unprecedented growth, population growth, economic growth, and are vitally important. Or people who see cities as a problem and the enemy that need to be reigned in.”

A Tragic Night in Dallas: DISD Trustee’s Son and a 9-Year-Old Girl Killed in Separate Shootings