This week, residents of Dallas’ historic Little Mexico Village apartments got a scare. Tenants were told through a note posted on their doors that the Dallas Housing Authority intended to ask the U.S. Department of Housing and Urban Development for permission to sell the complex, and that public input on the matter was to take place in two days. That note came from the Texas Tenants Union.

A low-slung set of pink apartment buildings there long before the city developed around it, Little Mexico Village is an important piece of Dallas’ makeup of affordable housing. The city is desperate for lower- and mixed-income apartment complexes in parts of the city with strong access to jobs and services. Little Mexico Village, one of Dallas’ few remnants of its once bustling Little Mexico neighborhood, sits off Harry Hines near where the Katy Trail passes the Tollway—prime Dallas real estate. Residents might have wondered whether DHA was going to sell it to the highest bidder, whether their homes would turn into, say, a hotel.

It won’t become a hotel. That part is for certain because, among other reasons, the U.S. Department of Housing and Urban Development would never allow it, DHA says. Any sale would include a restriction requiring the next owner to maintain at least the same amount of total units, and at least 51 percent of them would have to be affordable, DHA Board Chair Jorge Baldor said Tuesday. Baldor says the organization, which last year rebranded to DHA — Housing Solutions for North Texas, is performing due diligence with each of the eight properties it owns. That includes considering whether to redevelop or sell. Little Mexico is different only insofar that its tenants received that note.

According to DHA, the proposal at Monday’s meeting was to notify HUD that DHA is merely considering doing something with the property. That “something” is up in the air. It was a highly attended, nearly standing-room-only meeting, and Baldor said that’s when the board realized there had been a lack of communication about what approval would mean. Baldor and Commissioner Reginald Gray voted to kill it, vowing to engage residents about their building’s future and try again at a future date. It died two votes to one.

“The board is a new board,” says Baldor. “It is open to making decisions that are community-based. That may not have always been the case.”

In an emailed statement on Wednesday, DHA expanded on its side of the story:

DHA is committed to providing quality affordable housing for the families we serve, and that’s why we have determined that Little Mexico Village, built in 1940 and last updated in 1995, needs to be updated to meet the needs of our residents.

In order for us to do that, we want to explore all of our options, which includes possible redevelopment, possible sale + redevelopment through a public-private partnership, or possible public sale with use of proceeds to develop new affordable housing. Even though we have not yet determined a path forward, we’re required to notify HUD if we are planning to redevelop or sell any public housing property we own. All of these options require HUD approval, which is why the board reviewed the amendment on Monday night.

The Texas Tenants Union disputes DHA’s statement. The organization says it was merely notifying the residents to the public meeting of what was being considered.

All that said, DHA’s plans to redevelop its existing properties are no secret. Early last year, the agency grouped a dozen development firms into a pre-vetted pool to handle these jobs. They include well-known outfits like the Trammell Crow Company and Matthews Southwest. Brooks Manor is the first to get underway, a public-private partnership with Volunteers of America to put up senior living and a health clinic with both market-rate and affordable units. The development is going up on an empty, 7-acre lot in Oak Cliff. It’s possible Little Mexico could be redeveloped through the same pool of firms. 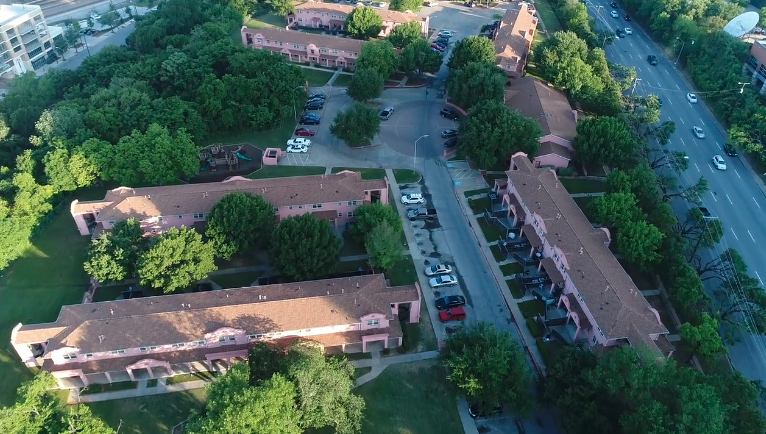 Because of its historical significance, it has always elicited a special kind of interest. It’s made up of 102 units, all of them affordable, sprawled out over 10 buildings. Densifying could make sense. Whether through their own developments or by selling to a new owner, the whole purpose, Baldor says, would be a significant increase in the number of affordable units, while making sure the development becomes mixed income, which is where DHA sees its future. “This is land that DHA owns that’s not being used in an efficient way,” he says. “So it’s a very logical place for expansion of housing.”

He suggests that a few other restrictions could help quell concerns about losing a valuable piece of Dallas history—things like matching certain elements of the architecture or even color to the existing building, or keeping the row of housing abutting Harry Hines while developing behind it. But he acknowledges that not everyone will be happy.

“I’m very sensitive to the historical value of that particular property, as well, and the significance of it to the history of our city,” Baldor says. “Let’s get some of the community members involved and let them see the plans and have the input.”