It has been a bit of a long week, what with all the election robocalls, slow demo progress with the Leaning Tower of Dallas, and stocking up on dry goods for the pandemic. So when I was invited to spend yesterday morning cross-stitching in the calming, art-filled confines of Kasart in the Preston Royal shopping center, I said yes.

I was greeted by owner Mariana Tagle and a platter of yogurt parfaits, chocolate-swirled pound cake, and brownie bites. I made myself a mimosa, and I could already feel my perimenopausal hormones stop their infernal melee and settle down into tiny, metaphorical spa lounge chairs with cucumber eye patches.

Since I was early, I picked a spot at the table closest to the mimosa bucket. Mexican designer and needleworker Mariana Barran Goodall, owner of Houston-based Hibiscus Linens, was in town for a trunk show at Kasart. She was hosting a couple of cross-stitch classes in the store to teach some of the centuries-old techniques she uses to embroider her lines of bedding, napkins, hand towels, and smocked children’s clothes.

Other attendees started to arrive, mostly young moms who were fleeing strep-infested homes. Two were friends, but the rest, like me, came alone. Dressed in a stylish lace blouse and hand-beaded jewelry, Goodall was all Latin love and light, getting everyone settled into stations stocked with wooden hoops, thread snips, and washable fabric pens. We each picked out four linen napkins, edged in the color of our choice, and embroidery floss from the rainbow-colored mound in the center of the table. 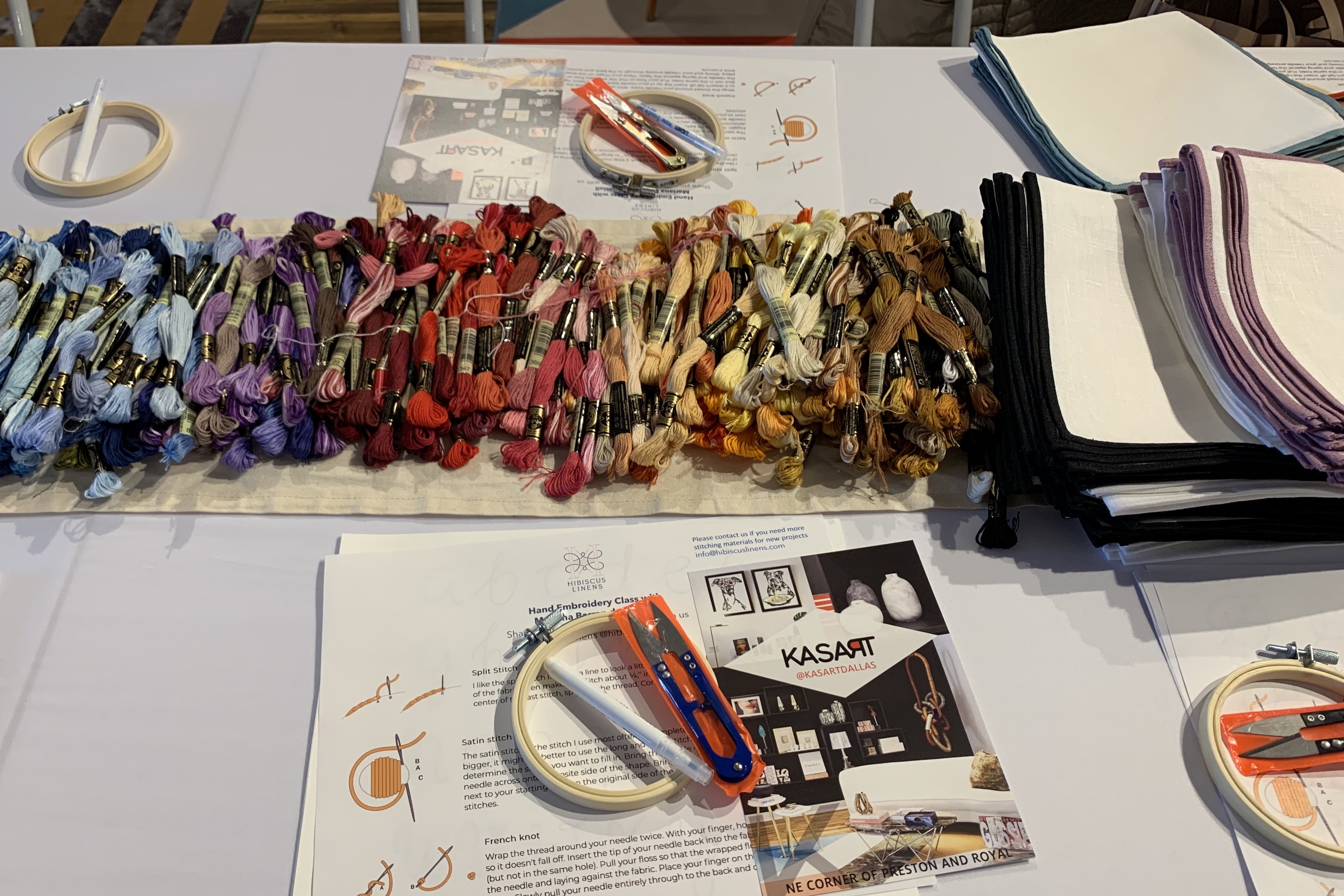 The tools of the trade.

Goodall gave us our choice of patterns to trace on the napkins, and then she demonstrated the basics of seed and satin stitches. We all hunched over our hoops and she made the rounds, giving us pointers and sorting out knots. Despite my ineptitude and regrettable lack of reading glasses, the next couple of hours became a soothing rhythm of needle and thread: through, over, behind, split. There was a surprisingly lack of small talk from the ladies, all of whom were focused on the task at hand. A murmuring of sympathy erupted when one mom got a call from her husband that her twin girls were sick with strep for the third or fourth time. The mom herself had just gotten over strep, again, after getting her tonsils out, a pain that she said she’d trade for a drug-free C-section. Advice was relayed about sorting out patient zero — maybe her son? — and it started to feel a little like the Outlander episode where the women sit around the table waulking wool, singing and gossiping.

After trying to salvage my embroidered initial with a padded satin stitch, I finally gave it up and got a piece of pound cake instead. I roamed the store and picked out a set of Goodall’s embroidered cocktail napkins for a friend’s birthday (they will match her blue countertops beautifully). Goodall offered to draw patterns for anyone who wanted them — she will happily incorporate customers’ china and silverware patterns into custom designs.

She says she’ll be back to teach another class in May (you can check the class schedule here). In the meantime, you can shop her linens at Kasart.