On the table: fees to pay for infrastructure, cutoff times, geo-fencing, and more.
By Shawn Shinneman | February 18, 2020|4:30 pm
Advertisement

Dallas is getting closer to imposing new rules on scooter companies that will likely impact the time of day you can ride and, the city hopes, will incentivize companies to keep sidewalks clear of piles of toppled-over machines. The city is also working out a new fee structure to drive revenue for much-needed infrastructure repairs that could include dedicated bike lanes.

After a four month extension in November, the city’s dockless mobility pilot program ends next month. City Council is set to vote in new regulations on March 25. City staff has been locked in negotiations with scooter operators Uber, Bird, Wheels, Lime, and Ojo, plus stakeholders of highly traversed neighborhoods like Deep Ellum and Uptown. It presented the results of those negotiations, which are still wrapping up, during Tuesday’s meeting of the Transportation Infrastructure Committee.

We’ll start with the fees. Staff previously discussed charging scooter operators $1 per day per scooter. That structure, the city estimated, would’ve resulted in an added $1.8 million in revenue per year and, likely, a lot less scooters on the streets. But the threat of scaring companies off is ever-present, and after further negotiations, the sides landed on a fee per ride structure. Based on ridership numbers provided by the city on Tuesday, charging $.20 per trip, as the city suggests, would result in about $530,000 in revenue each year. Keep in mind that Dallas doesn’t get much in vendor and vehicle application fees, especially compared to other cities. Austin charges $30,000 for every scooter operator that applies to enter the city. After the city’s suggested hike, we’d be at $1,000 per operator and $30 per vehicle. 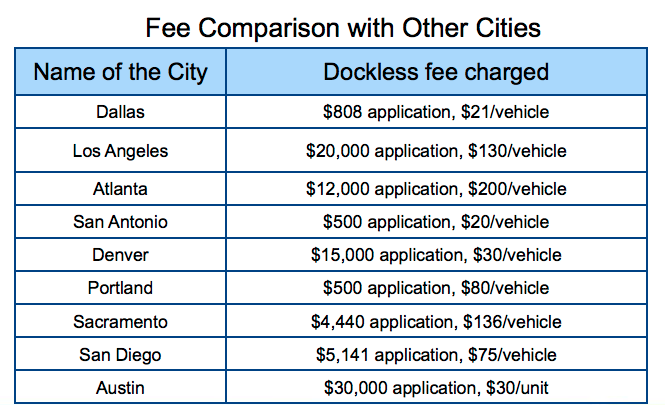 It wants to limit fallen vehicles on sidewalks with the threat of impoundment, an enforcement service it will outsource. Once someone identifies a pile of scooters, companies will be notified and have two hours to get them upright, or they will be carted off. Here, the third-party should help with something that would be otherwise difficult to enforce. The city says it will also put up some 100 designated scooter parking areas around the city, and that users could receive a “bounty” for returning them to these locations.

And then there are the hours of operation. Scooters will be digitally shut off after 11:30 p.m. and prior to 5 a.m., per the staff’s recommendations. That could change when the final ordinance comes to Council—a few Council members suggested matching it with the schedule of DART, which runs through midnight. Deep Ellum, staff suggests, would be digitally fenced off so that there is a more strict timeframe—scooters won’t be allowed past 9 p.m. Other areas could be under slower speed controls. These are measures that will require the operators to share real-time data with the city (or, with a vendor the city contracts), something that appeared to be a sticking point previously but on Tuesday was discussed as a foregone conclusion.

These are timeframes developed in large part to cut down on rising injuries, obviously more of a risk when alcohol and extreme traffic congestion is involved. And they are more generous than at least some cities of a similar size, such as Denver and Atlanta, which cut off rides at 9 p.m.

Finally, to be a last-mile solution for folks riding the DART, these scooters need to actually be placed at DART stations, and city didn’t bring forth much of a plan for incentivizing the scooter companies to do so.

“I would like to see them be more aggressive and have their units placed in bus stops and train stops in the entire city of Dallas,” said South Dallas Council member Adam Bazaldua.

Almost get fired, then get a raise two months later. Welcome to Dallas.
By Bethany Erickson
Uncategorized