The days of Airbnb hosts skirting local taxes could be coming to an end, and the city of Dallas may soon consider other new regulations to the short-term rental industry.

On Tuesday, city staff briefed the Quality of Life, Arts, and Culture Committee on their options for regulating a growing industry that brings out all the neighborhood complaints you may imagine: noise, parking, overcrowding, trash. They are also a way for out-of-towners to find a cheaper and more neighborhood-inclusive route into the city, and for Dallasites to earn extra income. It’s a conversation that brings out strong opinions. While other cities have already codified significant regulations of the industry, it’s just beginning in Dallas.

The city has already decided to enforce its rule that hosts pay hotel taxes. It hired a technology company in November to scour the web for addresses of short-term rentals. Only 400 have registered with City Hall so far, bringing in about $245,000 in taxes. Staff has identified 1,200 “registration pending” short term rentals in town, which are Airbnbs and others that hadn’t bothered to notify the city. There could very well be more.

Getting those operations registered is the first step, and it’s more complicated than you may think. Staff says that the city has engaged operators like Airbnb but has faced reluctance to charge local taxes through the app. (Airbnb has reached similar agreements with other municipalities, however.) That means an extra burden falls on the hosts, some of whom may only make something like $1,000 a month, according to Kris Sweckard, Dallas’ director of sustainable development and construction.

Step two, based on opinions voiced by Council members on Tuesday, appears to be figuring out how and what else to regulate. Noise and parking complaints put stress on Dallas PD, while trash and overcrowding (the latter of which is nearly impossible to enforce) cut into code enforcement resources. But revenue from hotel taxes cannot pay for these uses, so there’s a discussion to be had about how to limit the damage. “I don’t want to be so burdensome that our own residents that are seeing this as an income stream, that we’re going to be punishing them as well,” said Council member Jennifer Gates, of North Dallas. 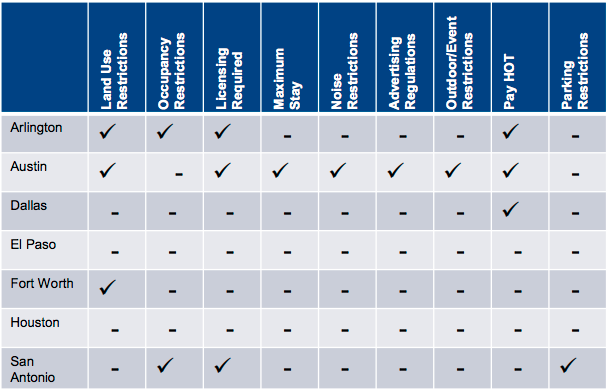 A look at regulations in place around other Texas municipalities, courtesy the City of Dallas.

A ton of the short term rentals fall in Council member David Blewett’s district, which includes Uptown and downtown and part of East Dallas. And he was proportionately gung ho about regulating them. He called up a resident of his neighborhood who made sure to mention that people had been shot inside Airbnbs and said her neighbor’s teenage daughter had seen things at a party house through her window that nobody should. Among Blewett’s suggestions are annual fees, a dedicated code for short term rentals, and a three-strikes-you’re-out enforcement of that code.

“I recognize unregulated STRs as a threat to our single-family neighbors,” he said.

There is also the more corporate side of the equation to take into account. Some percentage of these homes are owned by the same large companies. Some apartment buildings have started to set aside significant portions of their units as short term rentals. In other words, Big Real Estate has in some instances monetized something sold as a money-maker for your average Jane or Joe. That became one more talking point around the horseshoe on Tuesday.

The committee decided to create a task force to continue discussing the matter and hearing more pros and cons from community residents. It will report back quarterly. For now, several Council members appear to be taking a wait-and-see approach.

“I don’t want to over-regulate any of this,” West Dallas Council member Omar Narvaez said, “But I do want to put sensible regulations.”