Every January, hundreds of volunteers fan out across Dallas to count the homeless. Since 2007, this has been a federally-mandated activity, one done on chilly nights because the shelters are more likely to be full, making the total easier to count. On Thursday night, I was one of these volunteers.

We were each assigned a team and a zone to cover for the federal government’s Point-In-Time study, which operates as a sort of homeless Census. This informs how homeless services and funding are doled out across the country. Between 2016 and 2019, the Metro Dallas Homeless Alliance found a 16 percent increase in sheltered homeless and an 8 percent jump in unsheltered.

Last year’s count found 1,452 unsheltered homeless, another 2,313 in emergency shelters, and about 800 in safe haven housing and transitional housing. The increase lies in stark contrast to Houston, which has reduced its homeless population by 54 percent since 2011. Dallas now has a larger homeless population than Houston, despite being a smaller city. 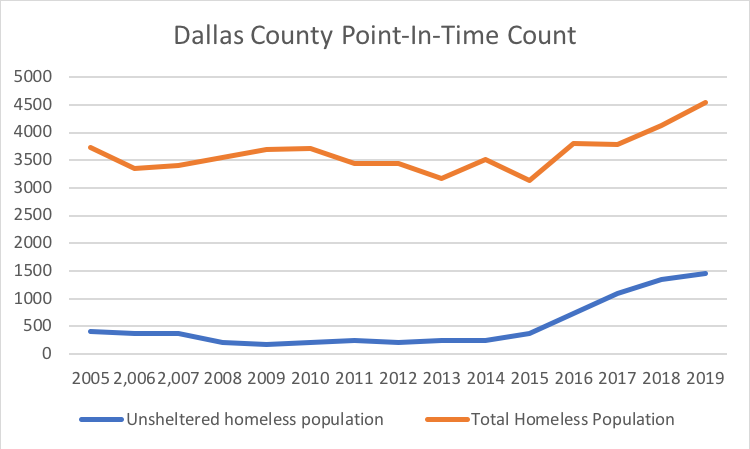 Houston’s success came in part from boosting housing and making contact with homeless veterans. It resulted in increased federal dollars, mostly via the U.S. Department of Housing and Urban Development. The Texas Tribune reports that Houston received $38.2 million in 2018, while Dallas only received $16.5 million. Part of Houston’s success is coordinating the efforts of food, clothing, and housing with a digital database called the Homeless Management Information System.

But some of the coordination that exists in Houston could be on its way here.

“We are making a plan to get the community as a whole working efficiently,” says Kenn Webb, a lawyer who is now on a strategic planning task force for MDHA and was the first chair of the Dallas Citizens Homeless Commission. “We are making sure people are on the same page and making sure they aren’t working at cross purposes and developing an overarching strategic plan that gets everyone working in the same direction.”

But first comes the count. Representatives from MDHA coached us on how to approach a count and how to use the app, which provided interview questions about the person’s identity, health, and history. Amy and Steve were my partners. And they were great. They brought snacks, were experienced with human rights volunteerism, and most importantly, Steve was not afraid to yell into a dark forest about what we were doing and who we were. I was a bit more nervous.

We were assigned two zones in East Dallas, near our deploy site. In years past, homeless camps were mostly found downtown, near where the services are. They’ve since spread, cropping up all over the city. We started with the area bordered by Ferguson Road, Highland Road, Interstate 30 and White Rock Creek because we thought the mostly-wooded area would be ripe for homeless housing. We were mostly wrong.

It wasn’t from lack of trying. I tested the traction on my Mazda 3 tires driving down an unmarked muddy road off Highland parallel to railroad tracks with just enough room for the sedan to sneak between encroaching trees. We found what might have been a homeless camp and hiked a bit through the mud. Steve announced our presence to the entire woods, but all we found was an illegal dumping ground full of old tile and concrete.

The roads and gas stations in our zone were not fruitful, so we headed back into the woods between White Rock Creek and Valleyglen Drive – no luck. The forests of East Dallas are pitch-black and tailor-made to trigger thoughts of rogue bobcats or violent woodsmen, perhaps due to the deluge of true crime podcasts and nature films. Being there creates a new empathy for the people who may live there.

“Volunteers come back worried about the safety of the homeless folks,” says David Gruber, Development and Communications Director of MDHA. “The experience totally flips it on its head. Volunteers say, ‘These are human beings just like me. The difference is I have an address and they don’t have an address.’”

We came up empty on our first zone and had no success with the next. We were assigned to cruise the well-manicured and expansive lots of Forest Hills and Casa Linda, with Little Forest Hills in between. We didn’t see anyone that looked like they wouldn’t be offended if we asked them if they were experiencing homelessness (a delicate ask, to be sure).

As we drove along White Rock Lake, I told Steve and Amy about the family of coyotes that I often hear on my morning runs near Winfrey Point just as one of the canines darted in front of the car. We stopped and several more padded along through the meadow, and soon a chorus of coyotes filled the air with their calls, which sounds like puppies yelping in pain – the benefits of urban green space. The count? Coyotes: 3, homeless: 0.

Driving through an expensive city neighborhood was more evidence of how cities are making it difficult for the homeless and impoverished to find stable housing. “Poverty and income inequality together with the tight housing market provide a feeder system for homelessness,” says Webb. “There are a lot of people just one missed rent check or medical emergency away from becoming homeless.”

On his work with the commission, Webb said they worked with shelters to expand capacity and add additional beds, because the shelters usually run out of room. That lack of space has a lot to do with the lack of affordable and supportive housing to move into. According to MDHA, there are significant gaps in permanent supportive housing, long-term rapid rehousing, and short-term rapid rehousing, where those with some income who don’t need intensive support can move quickly out of the shelters. 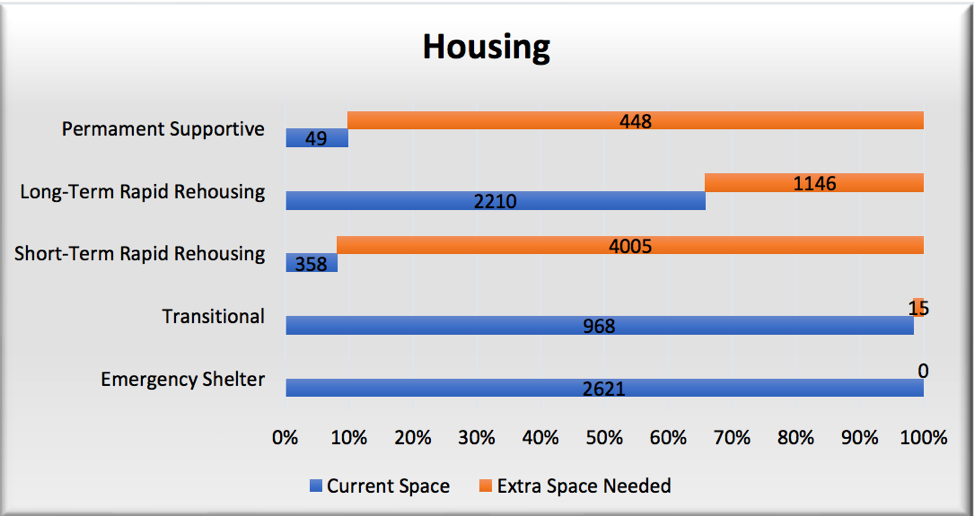 MDHA has a series of housing goals that include a comprehensive housing study. They also have some money available from the 2017 bond, which allows them to partner with government agencies to increase the housing supply and evaluate alternative options like tiny homes, apartment conversion, and shared housing. They want the homeless population prioritized on Housing Authority’s waitlist, and they reach out to landlords to recruit rental partners and give them incentive to house the homeless. Housing navigators connect potential tenants with suitable housing. But there has to be suitable housing for those connections to be made.

We felt like failures, but I was determined to at least make contact with someone who would qualify for our survey. I had a camp in mind that was just outside of our zone, but off the beaten path. We were in for a surprise.

For years, I had seen impressive and extensive structures built along White Rock Creek behind the QuikTrip on Garland Road. Steve announced our presence into the darkness from afar, and a tarp flipped back to reveal Bart. He was sitting at a snare drum and eating prime rib with his chihuahua, Lacy Suzanne Rodriguez Jalapeño-On-A-Stick.

Bart joked with us as we asked him questions and dropped off some supplies. He said he was a professional dumpster diver and missed his calling as a drummer. He spends his drum tips on half price food from Tom Thumb (explaining the prime rib) and says the QT employees give him old food for free. He has been behind the gas station for eight years, and says his whole house is on wheels. The tarps revealed lights, some furniture, and a small motorbike.

Bart had a joke for almost every interview question.

Q: Are you homeless because of a natural disaster?

Q: How far did you get in school?

A: Tenth grade, but I don’t know how I made it that far. I think I had an average of zero in everything but girls.

In addition to asking how long he had been homeless and why, the extensive and personal questions required us to ask about mental health and HIV status. The answers can be used to target resources and provide housing or other services. If a person says they have AIDS, are a victim of abuse, or are a veteran, there are programs in place to serve those populations. The app drops a pin to give the exact location of where the person was living so that outreach teams can find them later.

It was about as pleasant of an interaction as I have had with anyone in a long time. Bart said he liked living outside and considers himself an urban camper. He seemed healthy and happy. Lacy had the paunch of a well-fed pooch. Steve, Amy, and I agreed that he was a great ambassador to deconstruct preconceived notions and stigma that accompany the image of the homeless, just like most of those who are surveyed.

Bart knew about the homeless count and understood the need for it. He didn’t come off as someone that needed saving, an attitude that can impact how society interacts with and offers solutions to homelessness.

“The us-them attitude is something we need to get past,” Webb says. “The question isn’t about what to do about the homeless or really even what to do for the homeless. The question ought to be what can we do together to make Dallas a better place to live for all of us, including those who have the most urgent needs.”

As a result of the homeless commission’s recommendations, the city is instituting bus service that circulates between homeless shelters and needed services like the VA and social security office.

The city is also working to make housing for the homeless less concentrated downtown, despite strong opposition and NIMBYism that reared its head during a community meeting in Lake Highlands. The city looked at building a facility there last year. Research pokes holes in many arguments neighborhoods have against homeless housing. The St. Jude development on Forest Lane—where senior living was converted to homeless housing—is an anecdotal version of plenty of data that shows homeless housing doesn’t negatively impact home values or increase crime.

“Now that the community is open, the surrounding community realized these folks are just like me,” Webb says. “They needed a place to live and now they have it.”

The count is important for services and funding, but it also serves as a way for volunteers to gain awareness and perspective on homelessness. That night walking around the streets of Dallas may lead to advocacy for some counters.

“The first step to solving to the problem is awareness,” Gruber says. His advice for others is to be a voice for the affordable housing crisis plaguing much of Dallas. “Advocate for more housing of every type. There is only one thing that ends homelessness, and that is housing.”