Four months since its first meeting, the mayor’s non-police task force on violent crime has finished its report on how to curb violence in Dallas. It suggests four strategies, requiring action from both policymakers as well as nonprofits and philanthropists. The four:

2. Add outdoor lighting in locations where nighttime violence has been most severe.

3. Utilize schools to deliver group support that teaches kids to pause before they act.

4. Hire and train credible messengers from within high-violence neighborhoods as “violence interrupters” to keep resolvable conflicts from escalating into gun violence.

The recommendations included in the 41-page report have each been successful in curbing violent crime in major U.S. cities like New York, Chicago, and Philadelphia. The recommendations would likely be pilot programs, solutions that could be implemented quickly and relatively cheaply. The task force also reminds the City Council that it will need to chart these efforts and track results with an eye toward scaling what works.

The 16-member task force included a diverse group of backgrounds: advocates, community liaisons, an education specialist, a criminology professor, a real estate developer, and a chef who heads a nonprofit for kids who had gone through the juvenile justice system. They split into two groups. One was in charge of community outreach, canvassing neighborhoods and talking to people impacted by violence. The other sorted through studies, ran statistical models, negotiated for data, and mapped the city. Ultimately, the task force wanted to present items that could make a tangible difference if leaders expend the resources to enact a suggested action, says Alan Cohen, who is CEO of the Child Poverty Action Lab and co-chair of the group.

“If it is implemented as we’ve outlined and capitalized property, you should see results very quickly,” he says.

For each of the four strategies, it runs through an overview and a case study before spending the bulk of the time on “taking action,” including some ways to get started. Purely based on return on investment, fixing blight appears to be the most promising of the four suggestions. The task force estimates it can prevent 8.9 incidents of violence per year for every $10,000 it spends fixing boarded windows or broken-down doors and rehabbing vacant lots, areas that otherwise attract crime. 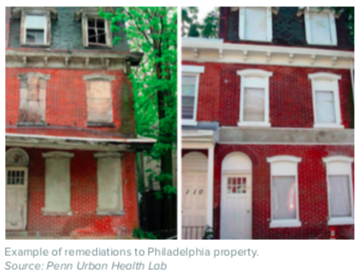 An example of blight remediation in Philadelphia.

“It’s one thing to say you’re in violation of city code so we’re going to put a notice on your door, and then you end up in a court situation. But to actually say, look, ‘We’ll pay for the door. We’ll pay for the windows,’” says Cohen. “It’s a very low cost for the kind of impact. We can have a debate about how people feel about whether or not someone should get free doors or free windows, but our job is what is going to be high-ROI strategies for reducing violence.”

The task force coded every part of the city into individual cells with surface areas of a quarter mile each. For $1.55 million, Dallas could fix all 165 “high ROI” and “high-cost, high-reward” cells of blight.

At $6,000 per unit (nearly $12,000 for the temporary towers), LED lighting towers aren’t cheap. But the report recommends a pilot project similar to NYC’s that would put up the lights in areas where nighttime firearm violence is highest. The temporary poles would allow Dallas to shift priorities.

Outside of the physical environment, the task force urged boosting support inside schools. Cohen credited Dallas ISD and other areas districts for introducing social emotional learning in recent years, which involves adding a curriculum that helps students process their feelings. The task force cites the Chicago Public Schools programs Becoming a Man (BAM) and Working on Womanhood (WOW), which teach cognitive behavioral therapy techniques to help teens from struggling areas cope with their emotions. BAM reduced total arrests of participants by around 30 percent and violent crime arrests by nearly 50 percent. The task force suggested that, as a first step, city of Dallas and DISD officials head to Chicago to study the program.

Finally, the report suggests deploying full-time, non-police “violence interruptors” who can identify conflicts in each neighborhood and intervene, as well as outreach workers to connect people with jobs, training, or other resources. Many of the violence interruptors would be former gang members or ex-offenders; they would not be employed by the police department. Similar programs have worked in other cities including Chicago, where “Cure Violence” led to a 38 percent reduction in homicides in neighborhoods where the interrupters were deployed. One neighborhood in Baltimore saw a 56 percent reduction.

With full-time staff required, this is not a cheap solution. One three-square-mile block in Chicago cost $427,000, and adjustments for present-day value would bring that cost to nearly $600,000. It is also very similar to—and often confused with—the plan presented by Police Chief U. Renee Hall late last year, called CeaseFire. But Cohen draws a distinction. He says that although CeaseFire could work parallel to Cure Violence, the latter is entirely separate from law enforcement and social workers—and needs to be so that the interruptors can effectively connect with the community and do their jobs. 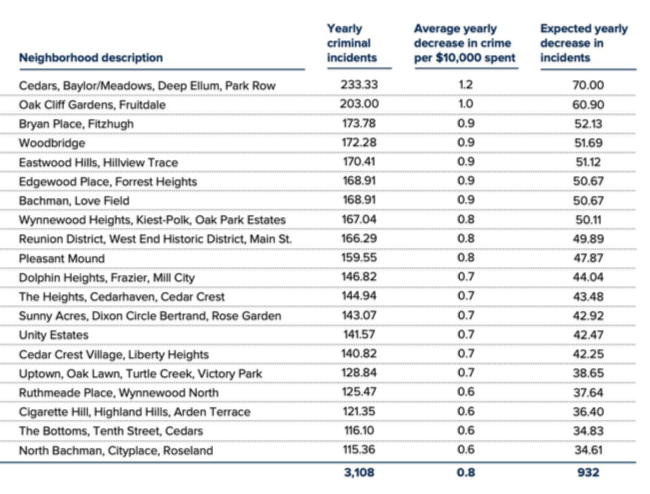 The potential impact of Cure Violence on various Dallas neighborhoods, per the Mayor’s Task Force on Safe Communities.

So, just nine days after the conclusion of its bloodiest year in decades, Dallas already has two sweeping documents suggesting how to dull violent crime. Chief Hall’s came out last week. Alex Piquero, the task forces’s UTD-based criminologist, calls the two “symbiotic.” Neither will matter if there’s no follow up. To that end, Piquero suggests an independent, external advisory group to collect and analyze data on how things are going. “That’s a no-cost thing,” he said. “We met at 6 o’clock on Monday nights, and people did it out of their own free will.”

Cohen can remember the tone of the first meeting well—it was at a particularly tense time in the city, the group having formed following the death of 9-year-old Brandoniya Bennett—and he says there was an overriding sense of responsibility in the room. In fact, by the time the report was released, it is already out of date: it notes a “wave of tragedies that has disproportionately impacted communities of color and that has put children as young as nine years old into caskets.” Just last weekend, 1-year-old Rory Norman was shot and killed by a man who fired into the windows of his Bonton home while he slept.

And so Cohen knows the stakes. He believes this is a strong report, but it will mean nothing if the right action doesn’t come next.

“Finishing the report is not a time to take a victory lap,” he says. “It is not fun to have weekends like we had last weekend. This is truly, critically important.”

A Tragic Night in Dallas: DISD Trustee’s Son and a 9-Year-Old Girl Killed in Separate Shootings