SMS
We’re about a month away from getting a first look at the city’s climate action plan, a document that will guide Dallas’ efforts to reduce emissions, conserve water, and improve the city’s overall environmental quality. On Monday, staff briefed a City Council committee on how that plan will approach water, and provided an update on ongoing efforts to conserve the area’s limited water resources.

The 30,000-foot view: The city believes it is conserving enough water to offset supply and demand shifts from climate change. It’s eyeing an extension of the Dallas Floodway and other tweaks to mitigate potential flood and drought impact, while monitoring for future action. It’s expanding or re-marketing conservation-focused programs you may not have heard about, while introducing new ones. And it’s continuing to develop more strategies in the name of improving our water supply.

Temperature increases are expected to bring evaporation and sedimentation losses that will vanquish about 70 million gallons of water from the city’s supply. On Monday, Dallas Water Utilities Director Terry Lowery told Council the city’s conservation efforts project to make it up.

Lowery says Dallas has made strides since the hot and dry summer of 2000, when the city used at least 600 million gallons of water over 75 days. And 33 times, it topped 700 million gallons in usage. In 2001, the city passed an ordinance restricting the time of day people can water their lawns and gardens using irrigation systems. Since 2012, when the city added a restriction that made it illegal to water more than twice a week, Dallas has only used more than 600 million gallons on six days. The restrictions have become a major part of the city’s efforts to conserve water.

Overall, Dallas offset a 10 percent population increase since 2001 with conservation efforts that reduced average water use per person by 30 percent. “That is a significant impact to our system and a very positive one,” Lowery said. “It extends the need for a very expensive water supply and it reduces pressure on our system.” 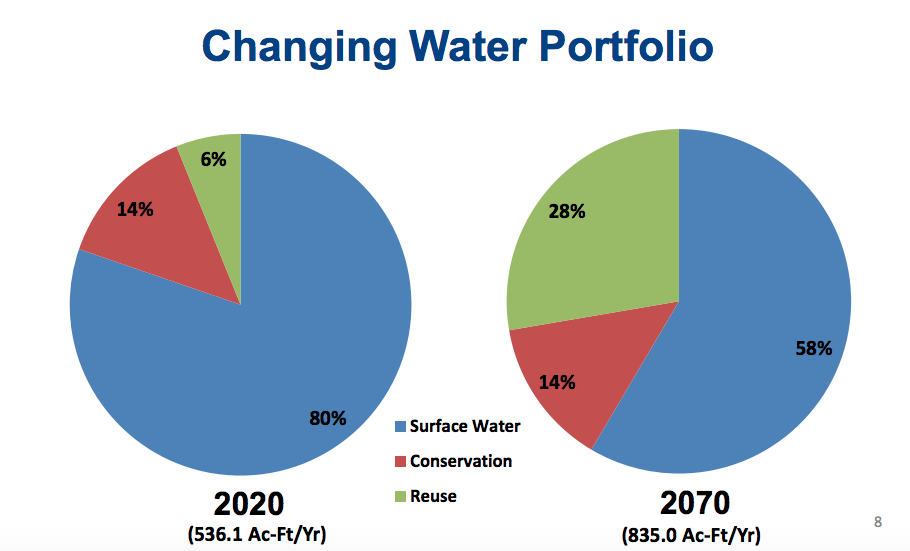 The next frontier? The city will begin to incentivize businesses to become more efficient. A first slate of rebates for water system renovations is up for Council approval on Wednesday. The incentives range from nearly $33,000 to around $87,000. If approved, the money will go toward three apartment buildings and Texas Instruments, each project resulting in between 7.5 million and 12 million gallons of water savings each year. Another eight rebates are pending.

“I get asked sometimes, ‘Why would you incentivize an ICI (Industrial, Commercial, and Institutional) customer? These customers have money to make these changes on their properties,’” said Holly Holt-Torres, the city’s Water Conservation Manager. “Well, companies have a limited amount of money in which to allocate. When they’re looking at where to allocate these resources, conservation and energy resources don’t necessarily come to the forefront.” 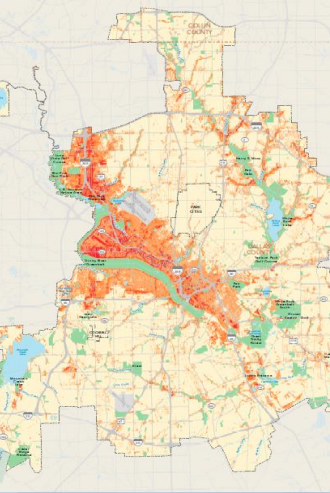 The dark spots show us the more flood-prone parts of Dallas. (Courtesy City of Dallas)

Consistent with the aim of the larger climate plan—officially titled the Comprehensive Environment and Climate Action Plan—the city says it is not singularly focused on the largest possible impact in terms of gallons saved; it wants a range of programs that offers something for everyone.

Conservation, however, is just one side of the coin. And the city will need to account for shifting flooding and draught conditions. On that portion, the city is still “evaluating policies affecting drainage and erosion and monitoring conditions related to drought,” says Susan Alvarez, assistant director for the city’s Office of Environmental Quality and Sustainability. “We have standing plans on how to implement various actions to mitigate those.” Staff also pointed to the ongoing Dallas Floodway Extension project.

Committee moved the briefing item along to Council with support. Full Council gets a look on Wednesday.

Injuries Pile Up as Dallas’ Day of Scooter Reckoning Approaches