This afternoon, the Dallas Independent School District’s Board of Trustees learned of a new way to use millions of dollars of bond money: spend it on public services that are not found within a two-mile radius around some of its neediest schools. The strategy is radically different than the typical approach to a school district’s bond, which doles out money to campuses based on facility need. In fact, it doesn’t seem any school district in the nation has tried this before.

Those driving this idea—Dallas ISD’s executives, its Racial Equity Office, and the Child Poverty Action Lab (CPAL), which is one of the district’s nonprofit partners—champion it as a way for a local government to fight the toxic effects of redlining, which linger more than 80 years after the federal government directed banks not to loan to communities of color and the poor. If the board—and taxpayers, when it’s up for a vote in November—approve, public dollars could pay for infrastructure that might house a grocer or a clinic or a therapist located on or near public schools on district land. It could pay for a librarian to keep the library open after hours or expand after school programs to meet demand. It could retrofit space for pro bono attorneys to consult families who are facing eviction.

During the briefing, Superintendent Michael Hinojosa said he expects to ask the board to allocate $40 million to $50 million for this effort. They’ll also need some help from partners like the city of Dallas, DART, Dallas Housing Authority, and many others to help implement these solutions.

That’s a lot of money, but a relatively small amount when considered within the context of the bond. It could be the largest in the state’s history; estimates have peaked at about $2.5 billion. It will include big-ticket items like replacing tornado damaged campuses and modernizing others. For context, replacing those schools could cost up to $350 million. The board begins penciling out dollar amounts next week.

“We have to be investing in neighborhoods that have been historically disinvested in, those that have been left out of economic development for decades,” says Ashley Flores, a senior director at CPAL, who helped lead the research. “I’m really interested in how we can use our bond dollars differently to address, or right, the wrongs of our past.”

To do that, Flores and her team used federal, state, and local data to compare each of the 196 schools against one another. (Magnet, Transformation and Innovation, and alternative schools are not included.) They’re calling it the Community Resource Index, a dashboard that judges the two mile-radius around each campus using 25 indicators spread across five categories: economics, education, family, health, and community. You can play with it here.

Is there a grocery store nearby? A bank? A clinic? Are eviction rates higher than elsewhere? How many payday loan shops are there? What’s the unemployment rate? College graduation rate? From there, each school was ranked on a scale from 1 through 196, helping the district identify those most in need of support.

The idea is to infuse data into the holistic, often anecdotal view of the student: if the home and the neighborhood are unstable, it will affect their ability to focus in the classroom. CPAL wanted to put hard numbers to that. Should the board approve allocating public money for this, the district will then go into the communities to verify the findings and hear from residents about their needs and wants. From there, DISD will determine the best solutions for each community’s needs.

“I do think somebody might say, ‘the school’s core competency isn’t housing affordability,’ or, ‘the school’s core competency isn’t childcare,’ but all of these things make up what’s necessary in order for kids to walk into the school doors ready to learn,” says Dr. Pamela Lear, the district’s chief of staff. “If I have parents who are unemployed, then chances are they’re not going to be able to provide for their kids because they don’t have the money to do that.”

These rank among the lowest in the district, when you put them against the highest ranking. Around Lincoln, the median household income is about $155,000 less than the district’s highest. Near Spruce, 75 percent fewer adults over 25 have college degrees. In the radius around Pinkston, the average life expectancy is 23 years less. In the two miles surrounding Roosevelt, there are 250,000 fewer jobs than the district’s best.

All of this can help the district lift up the neighborhoods they serve, well beyond just fixing up a campus.

“I’m a product of the redlining area, I lived in Frazier Courts,” says Leslie Williams, the director of the Office of Racial Equity. He’s referring to the since-destroyed housing projects not far from Fair Park. “As a child, I had never been in a grocery store. We just didn’t have grocery stores in our neighborhood. I can’t think of where a library was. So for us to be addressing some of those issues, and to know that those laws and policies and procedures are still impactful in 2020, it’s just amazing to see (the district) moving forward.”

The motion dovetails with the board’s equity resolution, which it passed in late 2017:

“we believe we must directly confront inequities in school and teacher quality, resource allocation, socioeconomically and racially segregated enrollment patterns, and issues of programmatic access and effectiveness that result in achievement and attainment inequities for each and every demographic group.”

That resolution led to the creation of the Racial Equity Office. And now it’s pushing money to pay for its purpose. There are all sorts of studies you can point to showing the impact of these factors on opportunity. Most recently, it’s come from Nadarajan “Raj” Chetty, a professor of economics at Harvard University. His Opportunity Atlas project showed how difficult it is for children to escape poverty when they grow up in poor neighborhoods.

It’s in line with the work of Patrick Sharkey, the sociologist who found a high correlation between where a person grew up and their economic mobility. His work has encouraged place-based investments not unlike what Dallas ISD is proposing. Locally, it has echoes of Mike Koprowski, the one-time Dallas ISD’er who started a nonprofit to encourage the district to invest in solutions that would help with housing. More than 30 percent of the student population in the district are living in poverty, the highest of any urban school district. He believed housing was key to solving that.

Flores, with CPAL, has ambitions that go beyond the bond. She envisions the CRI as a tool for any public agency to use when they’re considering where to deploy their dollars. She wants nonprofits to be able to draw a radius around the communities they’re curious about helping. So too for churches and other organizations.

And you can’t help but think about the impact of efforts such as this on the city’s growing crime rate. I asked the data wizard Robert Mundinger to overlay the murders in the city with the district’s socioeconomic tiers and this is what he delivered: 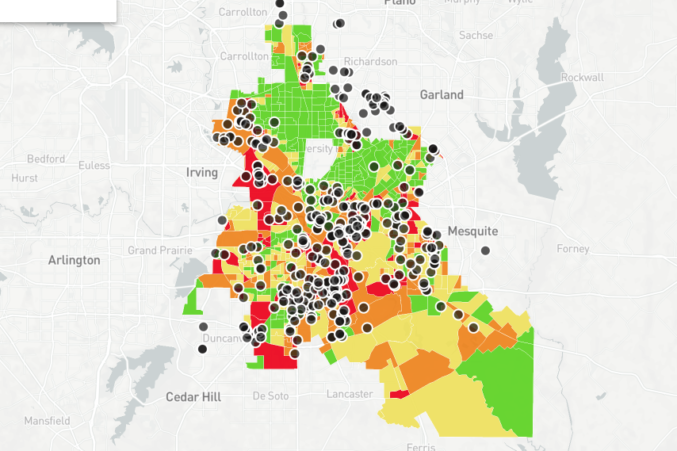 An overlay of the murders in Dallas (black dots) from 2017 to 2019 along with Dallas ISD’s socioeconomic tiers. Green is Tier 1, Yellow is 2, Orange is 3, Red is 4. (Photo by Robert Mundinger for theMap)

Many of the lowest-ranking neighborhoods in the CRI are also plagued by violence. Our Shawn Shinneman published a story earlier today about the findings of the Mayor’s violent crime task force, which recommended fixes like improving blight and lighting and providing emotional support and counseling to students. It led with a quote from the Harvard criminologist Thomas Abt: “Long-term efforts to address root causes and reform institutions can and should be paired with short-term investments in the people, places, and behaviors that matter most for violence reduction.”

I asked Co-Chair Alan Cohen whether he believed the goals of the CRI could have an impact on violence in these communities.

“It would be very, very interesting,” he said. “We don’t have examples of a CRI-driven process yet with regard to reduced violence as an evaluated outcome. Most of what we’ve informed the CRI on are tied much more to economic mobility. But clearly all these things are intertwined with one another.”

It is a progressive step toward helping improve parts of the city that have never been given this sort of focus. And as the topic went around the board on Thursday afternoon, no board member voiced any significant concerns.