Prior to the holidays, I came across a Facebook post from Judge Tonya Parker, who serves on the bench of Dallas’ 116th Civil District Court. She had just returned from a conference in Washington, D.C., and she mentioned that she had picked up a thing or two that she planned to apply to “phase II” of the Implicit Bias Project in the Dallas Civil Courts.

I hadn’t even been aware of phase I, but I was intrigued. So I called Judge Parker and arranged to meet with her in her chambers to learn more. It turns out that the project, which entails giving a jury instruction about implicit bias to jurors in certain civil trials (in this case, traffic accident cases) is probably the first study of its kind. In any court, anywhere.

To understand the study, you first need to understand implicit bias. In the 1990s, social psychology researchers came to realize that unconscious associations can impact our actions. We might believe that we are not overtly prejudiced or biased against any particular group, but we all hold unconscious preferences or aversions that we don’t even realize. Those implicit biases, if unchecked, can cause us to bypass conscious, logical thought and react in an inappropriate way. For example, studies show that those with an implicit bias against black people are more likely to categorize innocuous items, like phones, as weapons. In computer simulations, those same people are more likely to shoot an unarmed black person than a white person as a result. A horrific outcome.

Judge Parker had been generally aware of the issue of implicit bias, but the impetus for starting a task force to look at how it might impact decisions in civil courtrooms—and in her courtroom in particular—came in late 2016, when the Texas Supreme Court convened a summit in Dallas at Paul Quinn College. They invited trial, intermediate, and appellate court judges from all over the state to meet and discuss the impact of implicit bias in the justice system generally, but the focus quickly turned to criminal courts.

“It was quite extraordinary,” Judge Parker says. “But given that I sit on a civil district court, I walked out wondering, do people think that we’re not dealing with the issue of implicit bias in the civil courts, and that’s the reason it doesn’t get any attention?”

Judge Parker knew it was relevant to her courtroom. Prior to the conference, she read an article about a medical study that determined doctors are less likely to prescribe pain medication for persons of color. “They’re less likely to perceive patients who are black, in particular, as being in pain, and therefore they are less likely to prescribe pain medication,” she says. “And when I read that, given that we’re in an environment that awards money damages to people who contend that they have pain and suffering and physical impairment and mental anguish and all these intangible things that you can’t prove with a medical bill, I wondered does that translate in our environment? That is to say, do we have jurors and judges who are also not as likely to feel that certain people experience pain, suffering, anguish, or impairment versus other people?” 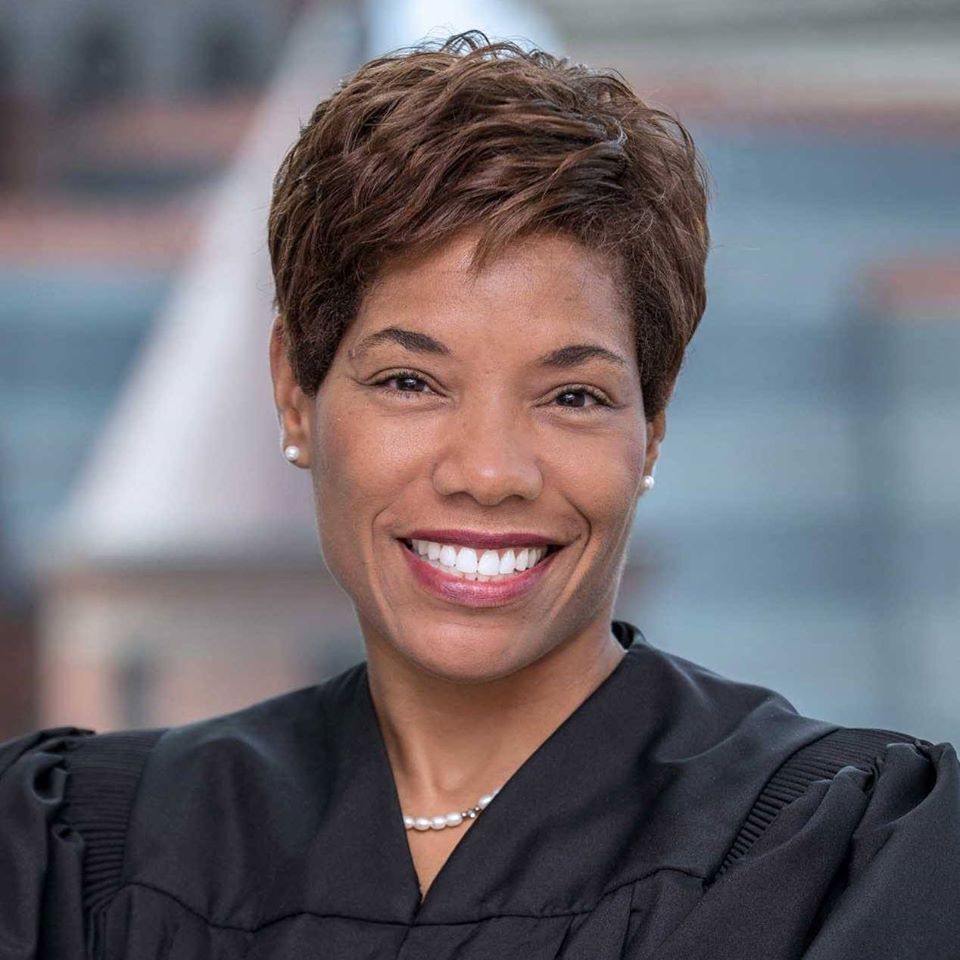 She decided to convene a task force. She enlisted her colleagues Judge Eric Moye and Judge Ingrid Warren, along with some other folks like Eliot Shavin, a practicing attorney and adjunct professor at SMU Dedman School of Law; his associate, Issa Kamara, with whom he has worked on a number of projects dealing with implicit bias; and Dr. Lynne Stokes, the chief of the statistical science department at SMU. (Judge Maricela Moore joined the task force in 2019.)

The group needed a starting point, ideally a model. Bar associations across the country were beginning to address the issue of implicit bias among judges and attorneys, offering continuing legal education courses and seminars on the topic. But there was little literature or training on the impact of implicit bias on civil juries. After some research, Judge Parker discovered that in Iowa, former U.S. District Judge Mark Bennett had developed a jury instruction about implicit bias that he used for both civil and criminal cases. It informed jurors what implicit bias is, of their penchant to have it even without their conscious knowledge, and the fact that it can affect the decisions they make if they’re not on guard for it. He wanted to make the point that a witness’ tattoo or hairdo or skin color should not be used to determine their credibility, culpability, or harm.

“Judge Bennett was kind enough to share some of his background with me, including that as a child one of his main care-providers was an African-American woman,” Judge Parker says. “And so he had spent his childhood, growing up in the ’50s and ’60s, walking through the world with a black woman and seeing how different that was than it was when he walked through the world by himself, and that always stayed with him.

“So he said when he became a federal judge, and he starts presiding over trials and again and again he’s seeing these black and brown defendants appearing in front of often largely white, middle-class juries, he thought, This can’t be fair. How can it be fair when they don’t even know these people. They don’t spend any time around these defendants. They only know what the TV tells them about who these people are, and that is a problem. And that’s what made him come up with this instruction and start using it in his court. So I asked him could we use it here.”

The National Center for State Courts had already done a study to evaluate Judge Bennett’s jury instruction, because there was a concern that it might anger jurors and have a reverse, negative impact. They attempted to measure its efficacy in a simulated environment, not with an actual jury, but the results were inconclusive. Judge Bennett took that as a good sign—no harm, no foul.

Judge Parker and her task force, however, wanted to see if they could measure the impact of the jury instruction with an actual jury. For their pilot project, they introduced Bennett’s instruction to juries hearing a particular kind of case—personal injury motor vehicle accidents—in an attempt to control for the many vagaries of trial.

The evidence in these cases, the judge says, is relatively standardized. There is a police report. Eyewitnesses may testify about the pain and suffering they saw after the crash. There are medical records to back it up. And the variance between the quality of counsel is minimal. “I can have a commercial case and literally have Trial Lawyer Extraordinaire of the Year on this side, and on the other a guy who’s helping his uncle,” Parker says. That sort of variance can have a significant impact on juries. The attorneys in car accident cases, on the other hand, tend to come from similar practice environments–high-volume law firms where they have similar dockets and resources.

The pilot project lasted 90 days at the end of 2018. Jurors in half of the personal injury motor vehicle accident cases were given an added implicit bias jury instruction with their usual instructions, and then given a questionnaire to complete when the trial was over. Because the jury instruction wasn’t sanctioned by the Supreme Court of Texas, its use was voluntary and had to be agreed to in advance by the judge and attorneys in each case. (Ten of the 13 Dallas County Civil District Court judges agreed to participate in the project, and only one lawyer refused to allow the instruction to be used.)

Do not decide the case based on “implicit biases.” As we discussed in jury selection, everyone, including me, has feelings, assumptions, perceptions, fears, and stereotypes, that is “implicit biases,” that we may not be aware of. These hidden thoughts can impact what we see and hear, how we remember what we see and hear, and how we make important decisions. Because you are making very important decisions in this case, I strongly encourage you to evaluate the evidence carefully and to resist jumping to conclusions based on personal likes or dislikes, generalizations, gut feelings, prejudices, sympathies, stereotypes, or biases. The law demands that you return a just verdict, based solely on the evidence, your individual evaluations of that evidence, your reason and common sense, and these instructions. Our system of justice is counting on you to render a fair decision based on the evidence, not on biases.

The point of the instruction, Judge Parker says, is not to weight the scales but to tare them, to zero them out, to remove any invisible debris. It’s not about getting better verdicts for plaintiffs or defendants. It’s not about affirmative action.

“Implicit bias is an issue that we all have to deal with,” she says. “And, really, for the first time in history I think middle-age white men have to be as concerned about issues of implicit bias as anybody else, because right now when you turn on the TV the images that are being trotted out about who they are and what they’re doing and being accused of doing are not very positive. And so I would think that they have as much interest in people seeing them fairly and giving them a clean slate and coming over here with a blank mind in their cases as anybody else. If you think the #MeToo movement doesn’t affect the extent to which a woman has an initial feeling about the credibility, truthfulness, forthrightness of a middle-age white man who’s here trying to have his case prosecuted or defended, you’re wrong. Because it does.”

The initial feedback showed that the jury instruction did not create a meaningful difference in the time juries spent deliberating (generally a good thing, because it means there are no greater costs to the county for implementing the instruction). It also showed that about 95 percent of those surveyed reported that they thought about the implicit bias instruction during the trial as they listened to and received evidence. More than half of the respondents reported that they were consciously influenced by the implicit bias instruction.

The initial results were promising enough that the task force has spent the last year revising its approach. Because the initial sample was too small to be statistically significant, they have decided to lengthen the time period of the study from 90 days to 6 months. They added a social psychologist to the team, Dr. Salena Brody from the University of Texas at Dallas. And they have asked for feedback from the plaintiff and defense bars as well of the deans of all of the local law schools. Judge Parker is currently waiting to hear back from SMU’s Institutional Review Board before moving forward with phase II of the project. But she’s hopeful.

“I don’t think there are a lot of people who are just blatant racists and sexist and bigoted in the world. I think people are well-intentioned and people of good nature who sometimes let their biases get the best of them. But if you call them to a higher place, I think they’ll go,” she says. “We’re trying to say to them, ‘We need something bigger and greater from you. The law demands that you return a just verdict based solely on the evidence, your individual evaluations of that evidence, your reason and common sense and these instructions. Our system of justice is counting on you to render a fair decision based on the evidence, not on biases.'”