The City of Dallas Wants More Control Over Those Scooters

Some neighborhoods want them shut off after 10 p.m. Some Council members want them closer to DART stations. This is still very much an ongoing process.
By Shawn Shinneman | December 4, 2019|3:51 pm
Advertisement

The City Council committee charged with transportation and infrastructure policy was briefed yesterday about scooters. In our continuing efforts to keep you apprised of such matters, this is what you need to know.

• While negotiations with scooter operators like Bird, Uber, and Lime remain ongoing, staff is suggesting changing the structure of fees operators pay the city to daily. They also want scooter use banned overnight and their speeds limited in certain areas.

• The city is asking scooters companies to share information about rides as they happen. Some of them haven’t agreed to this. Currently, operators that do send data provide it 24 hours after the fact.

• Dallas has 12,500 scooters in town and currently sees 7,700 rides per day, on average, with the graph skewing toward the weekends: 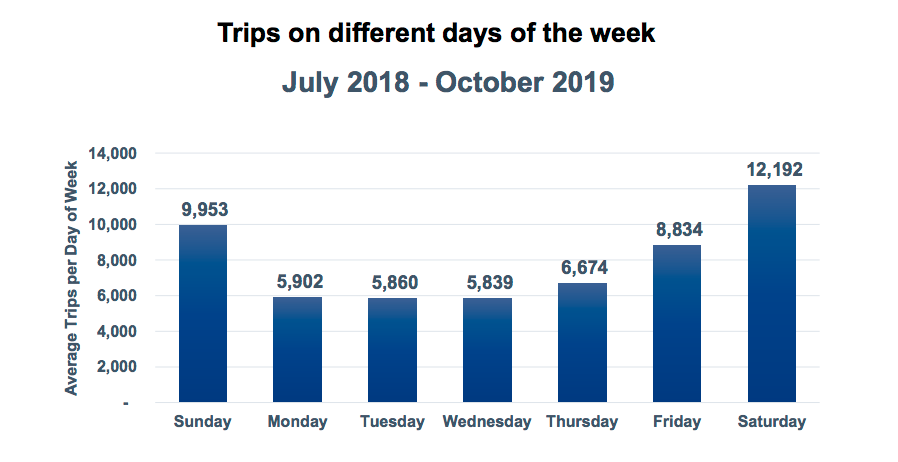 • Operators pay $21 a year for each scooter they put in Dallas. Under the new plan, that would change to $1 a day, generating an expected $1.8 million that would pay for improving sidewalk and street infrastructure. (My own quick calculations suggest the city is expecting the stock of scooters to be cut in more than half by these regulations. Purely for reference, the current total of 12,500 scooters would bring us about $4.5 million in yearly revenue. At $1.8 million, we’re looking at 5,000 scooters.)

• Rides are currently dispersed across these times: 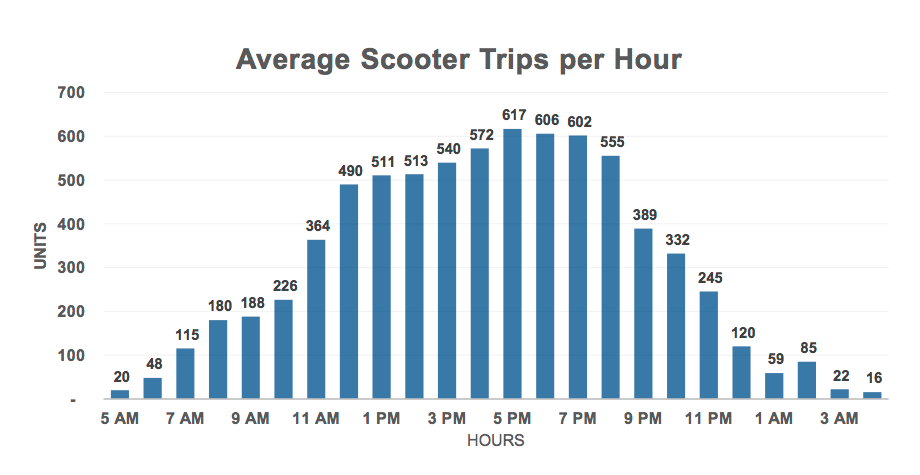 The city is attempting to balance the neighborhoods’ requests with those of operators, who have unanimously asked for scooters to go offline at midnight and come back at 4 a.m. We could end up seeing certain neighborhoods with different timestamps than the rest of the city. That said, Council members Chad West and Adam Bazaldua said they were concerned about shutting off scooters from workers or people soberly enjoying the city later into the evening. Again, it’s fluid.

• It’s the operators who would be responsible for digitally rigging their machines to slow down in slow zones and turn off in no zones. It’s the operators—not the consumers—who will be ticketed, $25 a pop, if one of their scooters flies through one of these areas.

• That will require all operators to share their data in real-time, so that the city can hold them accountable. Towfiq Khan, executive manager of the city’s transportation department, says they’ve been reluctant, citing personal information concerns. That’s a safe company line, because plenty of people wouldn’t love the idea of their city knowing where they are each time they ride a scooter. But Khan says it’s possible—and there’s no reason it wouldn’t be—to strip out the personal info. The city wants to keep tabs on the scooter, not the human. Whether operators pass on fees to bad-actor riders would be up to them, but if the technology works, they shouldn’t have to.

• One final point about that: Khan says the operators can’t punish riders who block the sidewalk when they park. They can tell within 10-15 feet, but would need 2-3 feet accuracy to catch people who leave scooters in the middle of sidewalks. Some of the operators are developing that technology, says Khan. And you could see a huge advantage for cities who’d like these operators to be more responsible with how they use public right of way. (Operators could, of course, pass the responsibility onto their consumers by assessing idiot fees.) That may prove to be an optimistic view of where we’re headed, particularly with operators cagey about sharing data. Outside of that, the city is proposing a $50 fee for operators looking to get their impounded scooters back.

• Finally, there are equity concerns here, as well. Staff wants to identify areas in disadvantaged communities where scooters can be deployed, and have operators put into place a cash option. It would use something like PayNearMe, which allows customers to pay off the bill in cash at retail locations. Scooters were sold in part as a last-mile transportation solution from DART and bus stations, but Bazaldua and Councilman Lee Kleinman say they too often end up bundled in the busiest business districts at the expense of spreading them into residential areas. As a compromise, Kleinman suggested waving daily fees for scooters that spend any time at a DART station, which would incentivize the operators to bring them back to the stations after charging. “Maybe there’s a way we can find a happy medium where we accomplish our goals, which is last mile, and address the concerns the vendors have over significantly increasing fees,” said Kleinman.

• We’re still a few months from Council passing anything. The yearlong scooter pilot program was set to conclude in November, but staff received a four-month extension so these talks could continue. They plan to continue negotiations with operators, bring it back to the Transportation and Infrastructure Committee in mid-February with a more concrete proposal, and then head to Council in late March.

Almost get fired, then get a raise two months later. Welcome to Dallas.
By Bethany Erickson
Uncategorized