The city believes a key corridor between Deep Ellum and East Dallas is in need of a road diet. Money from the last bond package is allocated to shrink the lanes of Columbia Avenue as well as portions of Abrams Road and Main and Commerce streets. Plans call for improved sidewalks and dedicated cycling infrastructure. The goal is to provide a safer experience for pedestrians and also motivate more ground-level retail, restaurants, and storefronts.

“The main thing has been balancing all the competing needs from the businesses, residents, transit users and bike users,” said Christina Tuner-Noteware, the city’s assistant director of Mobility and Street Services. “There are a lot of competing interests and complementary interests in this corridor. We’ve had community meetings, making sure we’re taking all of those interests into account. Trying to merge them all into one complete plan has been a challenge. But it’s been a fun challenge.”

This strategy is part of the city’s Complete Streets initiative, which redesigned Lowest Greenville and is being enacted on Henderson Avenue near Central Expressway. But it was driven by residents who, in 2017, started a petition to shrink Columbia. They called the three mile stretch one of the “most dangerous and under-utilized roads in Old East Dallas.”

“There is no way to make a seven-lane road safe,” says Nathaniel Barrett, the developer and Old East Dallas resident who started the petition. “It’s one of the highest injury and death corridors in Old East Dallas.”

Columbia is essentially a six-lane highway—seven lanes, when there are turns—that leads into Main Street on its way to Deep Ellum. The street is so wide because of decisions made in the 1970s. Back then, the city promised an efficient system that would allow some 40,000 cars to easily flow from the city’s core to points east. More lanes meant more capacity into downtown—seemingly. Fast forward almost 50 years and data from the North Central Texas Council of Governments show that just 14,000 to 19,000 vehicles are using the road daily, well below projections. Something needed to change. 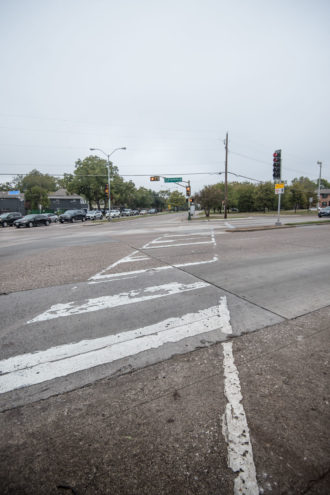 The wide crosswalks of Columbia Avenue, which are so large that it’s difficult to make it across before the light changes. (Photo by Jordan Jarrett)

Now, the wide street feels unsafe for pedestrians. Walking Columbia, from the point where Abrams ends, is uncomfortable at best and treacherous at worst. What sidewalks exist are overgrown with weeds, deeply cracked, sometimes gravelly, and consistently uneven. The sidewalks stop at driveways into businesses, and sometimes disappear altogether after the interruption. The road itself is so wide that crosswalks take nearly as long to walk as it does for the traffic light to change. Cyclists essentially share the road with drivers.

“We’ve got a long way to go before we’re a truly bicycle-friendly city,” said Councilman David Blewett, whose district includes portions of the makeover. “What I’m hoping for is that we encourage protected bike lane benefits, even if it means fewer land miles but more usage. It’s going to have to be safe. Safety is a huge component of bicycles and pedestrians.”

The good news: the projects are (mostly) funded. The Columbia project has $4.25 million bond dollars going toward it, and the adjacent Abrams project has $3.75 million. The pending Commerce project — from Good-Latimer Expressway to Exposition Avenue near Fair Park —will cost $9.7 million. Design on Commerce is projected to wrap up around December of next year.

The Columbia Avenue project will take 15 months. Design plans should be finalized by the end of the year. Construction should start in July 2020 and the project should be finished by the summer of 2021. The road will go from six lanes to four, which the city believes will slow traffic and allow for a design that is friendlier to pedestrians.

But Turner-Noteware says there are still challenges ahead, particularly with the competing interests from residents and businesses. Parking may come at the expense of a preferred bike lane design, and money spent on safer crosswalks and sidewalks may sacrifice immediate beautification.

“For the business owners, it’s very important that we convert the head-in parking to parallel parking and not lose spaces,” Turner-Noteware said. “In the residential area, it’s important that they have parking adjacent to their residences, and still provide the bike lanes and other amenities that they’re looking for.”

Bike lanes represent a significant component of the Complete Streets model. The plans for Columbia Avenue currently depict two protected options. The first keeps a bike lane on either side of the thoroughfare (on Main Street to the DART track on Peak Street, and then to the intersection of Columbia Avenue and Beacon Street). The second option is a two-way bike lane on one side of the street, diverted up through Elm Street. The city is leaning this direction due to limited space on that section of Main Street, Turner-Noteware said. Another community petition in August pushed for the first option, which would establish one bike lane on both sides of the whole thoroughfare. The city’s Public Works department is still exploring which it prefers.

“There’s really no good reason to have the option for the two-way bike lane,” said Barrett. “I’ve talked to the other property owners in that area … they are looking to have wider sidewalks so they can put in sidewalk cafes and things like that. Since I’m not a property owner on that stretch, I see it differently in that maintaining a continuous bicycle lane into Downtown is a higher priority to me than having a few extra feet to put in sidewalk cafes.”

Still, he called it “a small blemish on an overall really great project.”

There is also a strange quirk: the block of Abrams between Glasgow and Ridgeway won’t be a part of the project. The city’s engineering rules do not allow on-street parking due to safety concerns over sight lines and the curvature of the road. So if work gets done on this section, property owners would no longer be allowed to park on the street. By not working on it, the city essentially is grandfathering in street parking.

Another blemish, perhaps. But residents like Barrett are happy that the city is taking steps to fix the problems of its past. On Abrams, he notes, the city bulldozed homes to make way for a wider road. In a 1974 Dallas Morning News story announcing the road’s opening, Barrett found an enthusiastic brief promising that “the Abrams-Columbia throughway will almost surely become one of the city’s busiest thoroughfares.”

“For me,” he said, “it’s about bringing back together a neighborhood that was taken apart for who-knows-what reason.”