Each year, the Texas Tribune corrals a bunch of big names from the worlds of politics and policy, most of them from inside Texas, and a few from right here in Dallas. Here’s what we learned from a weekend in Austin, including several key points from a one-on-one between Dallas Morning News editor Mike Wilson and Mayor Eric Johnson.

The Mayor Isn’t Too Worried About the Spike in Murder. Johnson talked about the way the city’s 40 murders in May skewed the year’s stats. He said gang violence was, in part, the culprit for the spike, but that he was confident things would even out. Wilson asked whether he was understanding the mayor correctly—that Johnson believed the city was fundamentally as safe today as it was before the spike. His response:

“Here’s what I think about that. Statistically, if you look at crime statistics longitudinally and across the country, violent crime was at a record low within the past five to 10 years. It’s been so low that any increase is going to be, on a year-over-year basis, a large increase. It reminds me of a time when I was in the Legislature and the governor at one of his state of the state addresses talked about the 400 or 500 percent increase in the number of law enforcement officers who had been killed in the line of duty. I said, well, yeah, it went from one in one year to four in the next year. So that’s how that happens. Relatively speaking, the United States’ major cities—Dallas included—are safer today than they have been in the past 25 years.”

Chief U. Reneé Hall Has the Mayor’s Support, For Now. He says he’s found her to be “extremely accessible and extremely knowledgeable about modern policing,” but she’s “stubbed her toe” along the way. He commended Hall for her commitment to fix the issues rooted out by the KPMG audit.

“I will say,” he added, “I intentionally don’t fall in love with people I work with because at some point if things go a different direction in our city, everyone has to be prepared to do whatever they have to do.”

Mike Wilson Is the New Oprah. The mayor said so after the two got into a conversation about race. “It didn’t take me very long to figure out that more people expected me to be a good athlete or the first person to get picked in the pickup football game than to think that I might be scoring the highest in our AP math class,” he said. “There were perceptions that made me want to disprove some of the stereotypes and want to overachieve.” 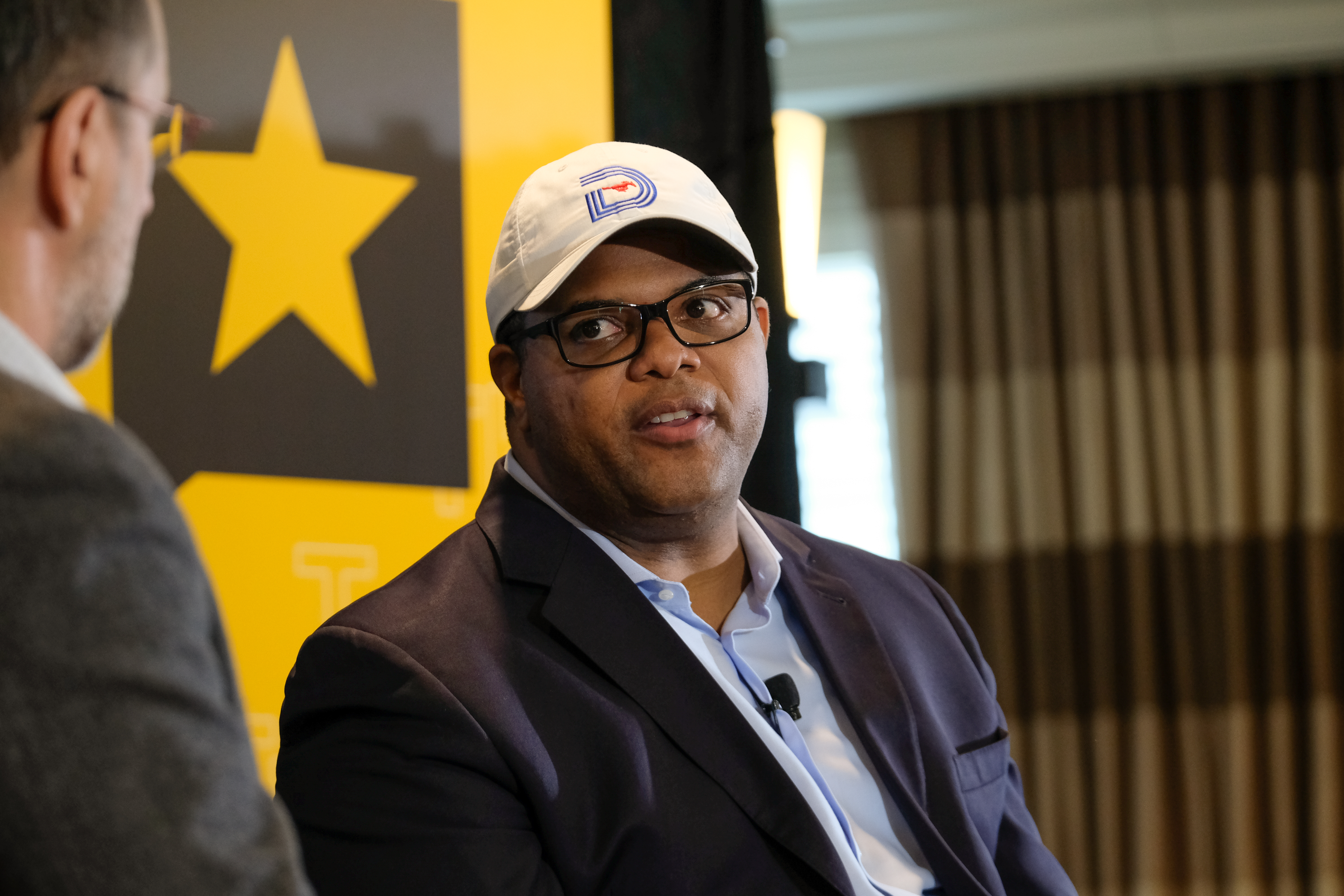 (Jordan Vonderhaar for The Texas Tribune)

Johnson Speaks on His Locke Lord Job. He downplayed its significance and voiced his displeasure of the way it has been covered by journalists. (Sound familiar?) He also shed light on what the job entails. He says he’s doing actual work:

“I’ll represent clients as they come up and who have needs in being advised in how to finance capital improvements—issuing bonds to build school buildings or build other public structures. Just not in Dallas. I can’t do anything related to the city of Dallas or any of its related entities. So that’d be the city of Dallas, that’d be DART, and that’d be DFW. But if some West Texas school district wants my expertise on how to finance a school building, which I’ve been doing for 15 years, I can pick up the phone and tell them how to do that.”

Locke Lord has provided him an office so he can take those calls away from City Hall.

The Mayor Doesn’t Want to Hear Phoenix and Dallas in the Same Sentence. “Dallas is ready to really make that next leap forward into the upper echelon of American cities and to be mentioned in the same breath as New York, Los Angeles, Chicago, as opposed to Phoenix, San Antonio, San Jose,” he said. “Because I do think we are more international than those cities. Phoenix is like the fifth largest city in the United States. It has one Fortune 500 company and that’s the University of Phoenix. Dallas has several. I think we’re ready to be on that world stage.” (Ed. Note: Phoenix actually has four and none of them are the university, but Dallas is indeed crushing that, with 10.)

The Mayor Has Given Almost No Thought to His Next Step. Politicians aren’t known for floating around without a plan, but we’ll take him at his word. “This could be the last term if the voters don’t want me to have another one or something changes between now and the end of this term,” said Johnson.

DISD Leaders Respond to Protests of the Teacher Excellence Initiative. TEI is the highly regarded system that incentivizes teacher performance, a big part of why the Trib put together a panel called “The Dallas Model.” But a group of teachers were at DISD’s most recent school board meeting protesting the link between salary and test scores, and an audience member asked Superintendent Michael Hinojosa and Trustee Miguel Solis how they would manage teacher morale. Hinojosa responded by citing turnover rates, which have fallen from 28 percent when he returned as superintendent in 2015 to 15 percent today (the state average is 18 percent). “We are keeping 95 percent of the highest performing teachers and less than 15 percent of the lowest performing teachers,” he said. “Punto final.”

Solis added that TEI is not perfect but continues to be tweaked with teacher input, and offers vast improvement from the prior system. He questioned whether protesters had students’ best interests in mind, as the prior system sprinkled feel-good evaluations across the district without giving teachers a reason to strive to be better. “Kids were being robbed of the dreams many of us in this room were able to fulfill and in some cases maybe take for granted,” he said. 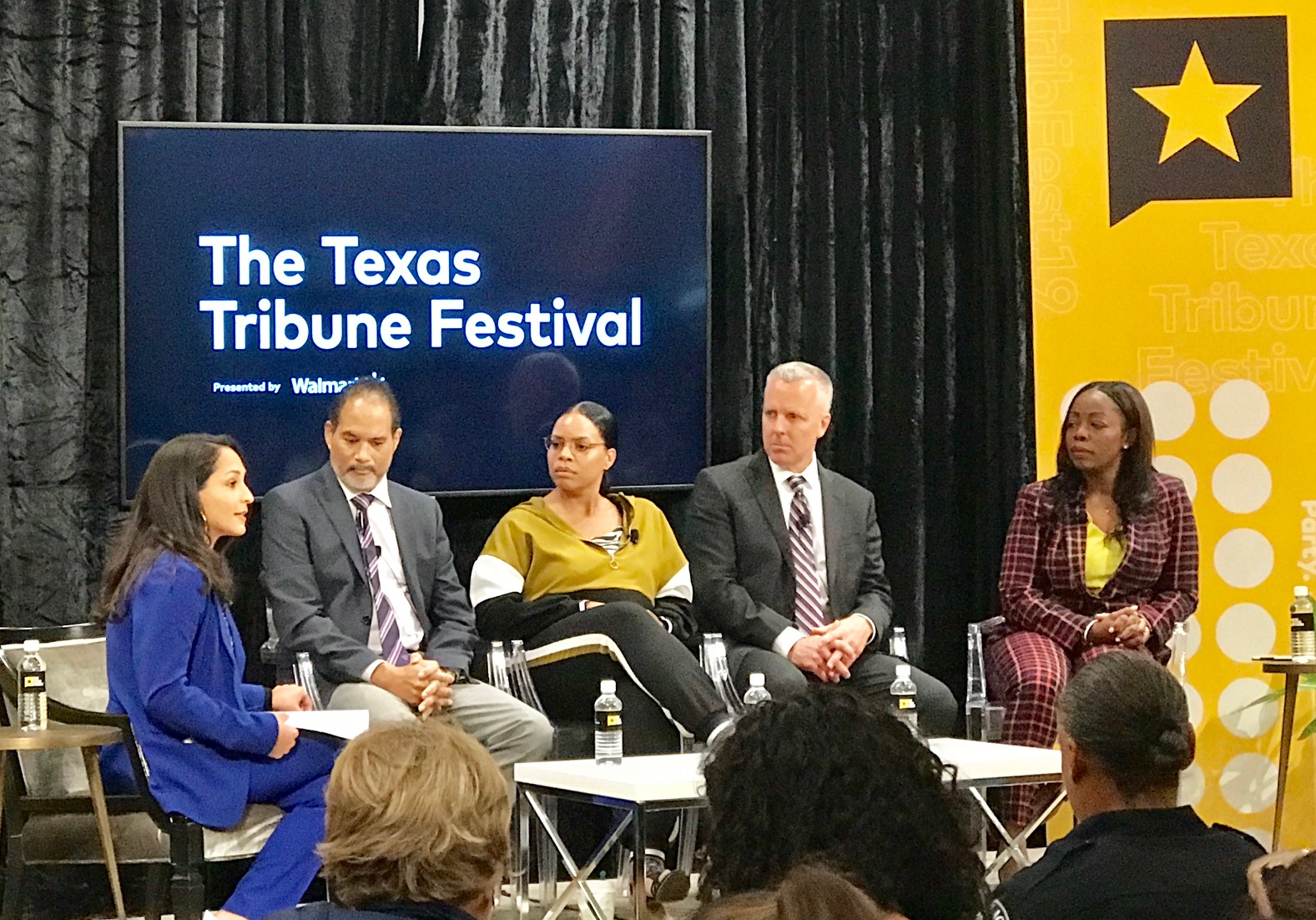 Hinojosa Isn’t Sure an Outsider Could Do His Job. The Oak Cliff native spoke the night after receiving a five-year extension on his contract. His first stint in the role started in 2005, when he took over for Mike Moses. Before that, the district saw five superintendents in five years. “I came and I struggled and then we had some success … and I knew the city. I’m now convinced it’s going to be difficult to be successful in Dallas unless you know Dallas.”

“Superintendents go from district to district, we bring our team, but we don’t understand the local context,” he said. “A public school district is a local entity.”

Laura Miller Aired Her Jerry World Grievances. I’m not sure Andy Loughnane, president of Austin’s new MLS team, knew what was coming when he was placed on a panel with the former Dallas mayor. Miller talked about getting beat up when Jerry World went to Arlington, how that city’s mayor ordered up a meeting with Jerry Jones and offered $325 million during opening handshakes. (A tale apparently recounted in this book.) But she had also prepped by reading Austin FC’s 190-page stadium lease. Loughnane called the new $250 million stadium 100 percent privately funded, but Miller shot back that the land was Austin’s.

“If you look around these cities today, the roads are atrocious, the traffic is insane, the flooding is astronomical, especially because of global warming,” she said. “There are so many problems, and there has to be a community decision about how you spend the money.”

It Was Not Easy To Hammer Out the Details of the New Citizens Police Review Board. You knew that already, but Dallas’ former chief of community relations Vana Hammond Parham—also a former police officer and assistant city attorney—brought us closer to the process during a panel on race and policing. “There are two things police officers hate,” she said. “One is change and the other is when things don’t change.

She credited Chief Hall’s efforts to bring activists into the discussion. “You had a sector of police officers who realized, hey, citizens need to have more of a voice. They agreed with the activists,” she said. “But then you had the old school officers that usually are running the unions and were going through a pension crisis.” Ultimately, the sides compromised with a strengthened Community Police Oversight Board and a new, three-person department to monitor DPD’s internal investigations, with power to ask for information.

“In my lawyer training, they always said in mediation class, the great thing about an agreement is when both people walk away feeling like I lost a little but I gained a little,” Parham said. “And nobody walks away feeling like, ‘I won.’”