Ann Marie Scichili stood on her back porch and pointed at her neighbors.

“That house doesn’t have a roof anymore,” she said. “This house had a tree fall in on it.”

And that fence back there, tipped nearly parallel to the earth, was it hers?

Scichili had been at her mom’s in Richardson 13 hours earlier, when an EF-3 tornado ripped through her neighborhood near Royal Lane and North Central Expressway. Shortly after it passed, she came back home with two siblings to assess the damage, a prolonged trip thanks to the downed power lines and toppled trees. They passed a nursing home where first responders were working to relocate elderly patients. Her home is about a mile southwest from that now unrecognizable North Dallas Home Depot, at Forest Lane and Central.

They could only make it as close as a few blocks away, and then they walked through a neighborhood that did not look the way they remembered it. There was a chunk of house in the middle of Valleydale Drive. Across from Scichili’s place on Valleydale, a family’s painted-white concrete wall had crumbled out into the front yard. Her neighbor was calling about their 15-year-old daughter who was home alone, and terrified.

Scichili’s assessment was blunt. “We think it first blew off the front door,” she said. Debris was strewn around her living room. Her couch cushion was missing. She collects salt and pepper shakers and was thrilled that only about 400 of her 5,000 were broken. “The roof is fucked,” she said.

Lunchtime Monday, her neighborhood was filled with residents, volunteers, and crews working to clean up the mess. Their work won’t end today. As with the storm that collapsed a crane onto a Deep Ellum apartment in June, the fallout from Sunday’s tornado will reverberate for weeks and likely months. It took some two months and millions of dollars, for instance, for the city to catch up on bulk trash service tied to that monstrous storm, which brought winds only half as powerful during a downburst that uprooted trees and toppled power lines. Now some of those same neighborhoods are filled with even more debris. 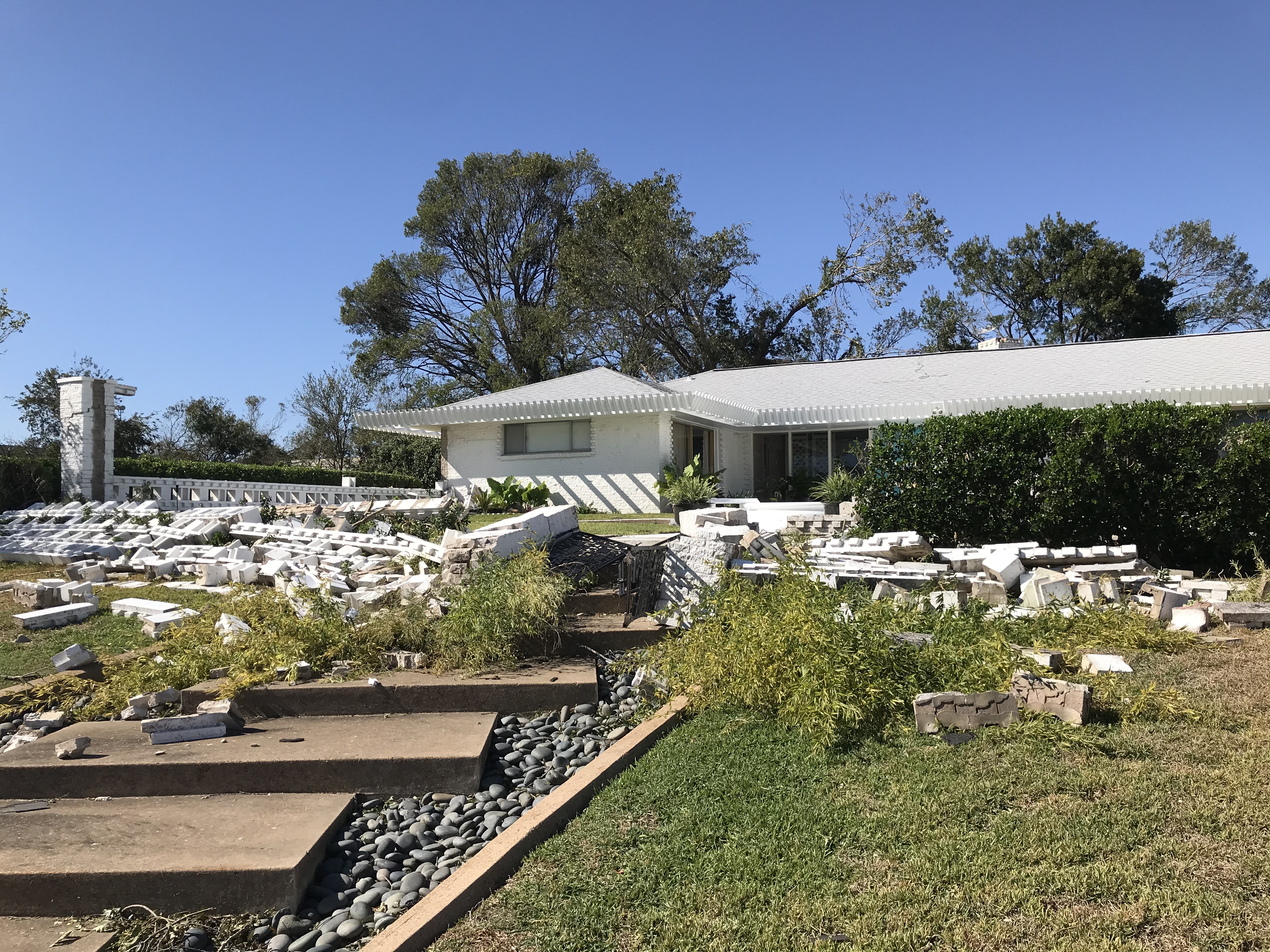 The home across the street from Ann Marie Scichili’s.
Shawn Shinneman

The destruction comes in many forms. A car dealership near Forest Lane and North Central Expressway had its glass walls blown out. A billboard nearby is advertising to the sky, bent 90 degrees. Letters are ripped off giant store signs—Studio Movie Grill is currently Sudi Movie Grill, the O gone, the T crooked. Giant trees have been completely uprooted and stop signs were torn out of the ground. Soccer goals outside the Jewish Community Center of Dallas were twisted up and thrown into a bent fence. And then there’s what happened at churches like Iglesias Emanuela and businesses like Fish City Grill and Interabang Books; all of those have been reduced, essentially, to rubble.

Power outages are widespread, as well. Oncor estimates that some 60,000 are without service in Dallas County, plus about 4,000 each in Collin and Tarrant counties. Monday, driving through the neighborhoods in the tornado’s path, you couldn’t go more than a few blocks without seeing another downed power line. Several roads are shut down, and traffic is slow. Where the Northaven Trail crosses St. Michaels Drive near Royal, families were stepping over one downed line while ducking under another. A couple of utility workers near the area said they’d worked after the June storm and that the damage caused to power lines by the tornado was degrees of magnitude more severe. Winds, after all, reached 140 miles per hour.

Incredibly, there seem to have been no serious injuries. Maybe that’s why people like Scichili can stand to look clear-eyed at the state of their house. That and all the neighborly love. “It was 1 o’clock last night and they were out with chainsaws,” she said. “The community here is unbelievable.”