I love that she has overshared about motherhood, telling TMI stories about her kids’ diapers to Reege on live TV. She has stuck her foot in her mouth on countless occasions, but apologized when necessary. She has opened up about her hardships, her miscarriage, her late husband’s infidelity. She has shamelessly sipped 5,300 glasses of wine in the morning. She has shown us her Spanx. She has talked about God and Jesus and her faith when that is just not something people do on television—unless they’re appearing on the Christian Broadcasting Network or they are rappers accepting a Grammy. These are also reasons why some people hate her. We will agree to disagree.

Point is, Kathie Lee has never not been Kathie Lee. She was living her authentic life in the public eye decades before the rest of us started doing it on social media. And from the time I was a wee People Magazine reader, eating up celebrity interviews like Skittles, to my years as a lonely stay-at-home mom, I have cringed, I have laughed, I have imagined my coffee cup was full of chardonnay.

So, when I saw an invitation to chat with Kathie Lee ahead of a luncheon, I RSVP’d with an emphatic “yes”—even though I opened the invite at 10 p.m. and the event was at noon the next day. There was no time to touch up my roots or find a sitter for my six-month-old, just barely enough to locate an acceptable upgrade from my newly-developed uniform of “spit-up dribbled athleisure.” Didn’t matter. This was the notorious KLG. Nap schedules went out the window. Baby put on his most professional onesie.

This private luncheon with Kathie Lee was at the Oak Lawn boutique Brenda Schoenfeld Now, which, as you may guess, is owned by a woman named Brenda Schoenfeld. I wrote about the magnetic Mexico-born designer and her magical boutique the week before I went on maternity leave. The first time I walked into Brenda’s shop she made a bee-line for my pregnant belly, so it was no surprise that even though Brenda was busy preparing for a highbrow luncheon, she immediately scooped the infant out of my tired arms and began baby-talking in Spanish a mile-a-minute. She ripped a price tag off a toy from the small kid’s area in the boutique, which is otherwise filled with heirloom-quality jewelry, glassware, décor, and linens. 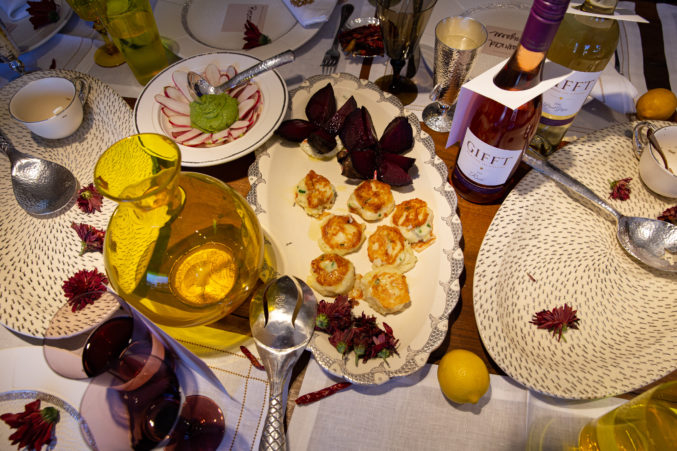 The spread. (Photo by Robert Underwood)

The little one babbled in Brenda’s lap as I sussed out the reason for Kathie Lee’s visit. Turns out, Brenda and Kathie Lee met almost 20 years ago. They were both vacationing with their young families at the Hotel du Cap-Eden-Roc in France when Kathie Lee noticed the staff fawning over a mysterious mom.

“I kept watching this magnificent woman,” Kathie Lee said. “She spoke five languages and everybody seemed to know her and her son, Diego. And I said to Frank, ‘She’s either royalty, or she’s the highest class hooker I have ever seen in my life.’” (Life lesson: If you want hotel staff to treat you like a queen and/or the highest class hooker, bring them gifts from Mexico each time you visit.)

The two have been friends ever since. Brenda has visited Kathie Lee’s homes in Connecticut, New York, and Nantucket. Kathie Lee visited Brenda’s villa in Italy. Kathie Lee also took Brenda to Israel. Brenda was baptized in the Jordan River. Tears welled up in Brenda’s eyes as she remembered the moment. “That really bonds two people once they share that walk with the eternal,” Kathie Lee said.

Kathie Lee was finally able to make it out to Dallas now that she’s not tied down by an on-air schedule. She bid adieu to the Today Show’s fourth hour in April. Not that she’s necessarily relishing in any downtime. In fact, she says her days are “more hectic than ever.”

“I did not retire from life,” said Kathie Lee. “I retired from a certain show. I’d had it with daytime television. I’ve been living it for 35 years, off and on. I was ready to manage my time completely on my own. I realized that for the first time in my life that I was completely free to do whatever I wanted to do.

“My husband had passed on to glory. My mom and dad are passed on. My children are in California. I was a widow, an orphan, and I have an empty nest at the same time. And rather than feeling sorry for myself about that, I just thought it’s a wonderful thing in a way. I can’t help it that it’s all happened that way. But I have freedom to choose whatever I want to do.” 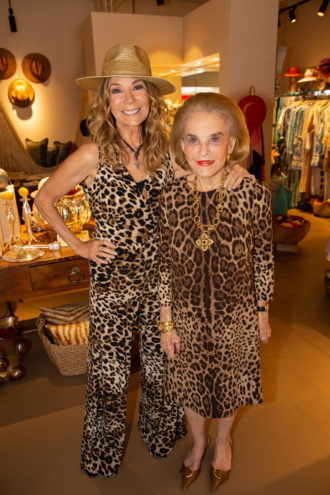 She chose to turn her focus to filmmaking and music and moved to Nashville. “It’s the most creative place in the world,” she said. “I came from Greenwich, Connecticut, 38 years I’ve lived in the Northeast. Never ever if we had a dinner party did anybody take a guitar off your wall, go and sit at your piano and you start writing songs and you have a jam session. And the next day you go, you know what? That song we wrote last night, let’s go record it. Then we’d go record it. Then the next day, I’m putting it in one of my movies that I’m writing. So it’s just this constant, like, what any artist experiences when they’re in their full joy, full zone.”

And none of it requires hair and makeup. “I mean, I used to get glammed up every single day for the show, and I’ve got to tell you, it is a joy not to have to do that. No. Most of the time I’m either writing, editing, or I’m in the studio, or I’m actually in Israel directing films now. So none of that requires Spanx or high heels, thankfully.”

The boutique began to fill with fancy ladies and Brenda popped out of her seat when Nancy Dedman, wife of late billionaire Robert Dedman, walked in. “Nancy brought me every client I have today!” she said to Kathie Lee. Nancy and Kathie Lee greeted one another with hugs and laughs, realizing they were twinning in leopard print outfits.

I was offered a glass of Kathie Lee’s GIFFT wine and invited to stay for the luncheon, but the baby was getting fussy and had ended up in other friendly arms. I got a photo of the baby with Kathie Lee and Brenda, a digital treasure I will cherish forever, then slipped out.

A brand-new G-Wagon pulled up while I buckled Baby into his carseat. He smelled like the Neiman’s perfume counter and had smudges of lipstick on his forehead. And maybe it was just his time, or maybe his brief encounter with Brenda and Kathie Lee sated his soul in some way; that night, he slept through till morning for the first time ever.