I had to bother Jennifer Staubach Gates for another story today, but when I got the North Dallas Council member on the phone, she was nice enough to also bring me up to speed on her last few days in Dallas. Gates’ district, which encompasses Preston Hollow, was among the hardest hit in the city. Here, she gives us a glimpse into the ongoing recovery efforts.

Can you update me on what you’ve been doing since the tornado hit? Some of the greatest impact was just a few blocks from me; my particular neighborhood was pretty much untouched. I was home on Sunday and started getting texts from friends that live in the neighborhood just south of mine, it’s the neighborhood that former Mayor Mike Rawlings lives in. I called Mike and said, “First of all, are you ok?” He was fine, and he’s so willing to help, he’s like I’ll run outside. And he sort of immediately surveyed the area and told me that the damage was very severe.

I got on my bike and went over to his neighborhood and started surveying, and then I went downtown to help activate the Office of Emergency Management. At that point, we had a lot of first responders all over the city and we were deploying the efforts at that point out of the emergency command center. And then that second storm came in.

The next morning, I was out. Lee Kleinman was out. Mayor Johnson was out. We were communicating back to the Office of Emergency Management what we were seeing. The first priority is trying to determine if the properties are safe and also if everybody is safe.

When you first assessed the damage around you, what did you think in that regard? Driving around the next day, it was hard to believe nobody was severely injured. It was hard to tell in the dark. I had a flashlight. There were a lot of people with flashlights that were out. It was hard to really grasp the severity. But I could see the power lines that were down. At that point, to be honest, when I was down in the emergency center they were saying they didn’t have any casualties but I just didn’t believe it. I said, “We just haven’t found them yet.”

That was my whole fear the first day. I was back out at 7:30 in the morning. Seeing the damage and seeing all the power lines that were down, it was shocking to me that nobody was electrocuted. That we didn’t have any severe injuries or deaths, I did not believe until Wednesday. I kept thinking that we would discover something that we just hadn’t discovered. And then you worry about people getting injured in unsafe structures trying to recover things.

In that first 24 hours, it’s all about the emergency response, and about peoples’ safety and clearing roads for first responders, and about being able to get to people and making sure all the electrical lines are turned off. 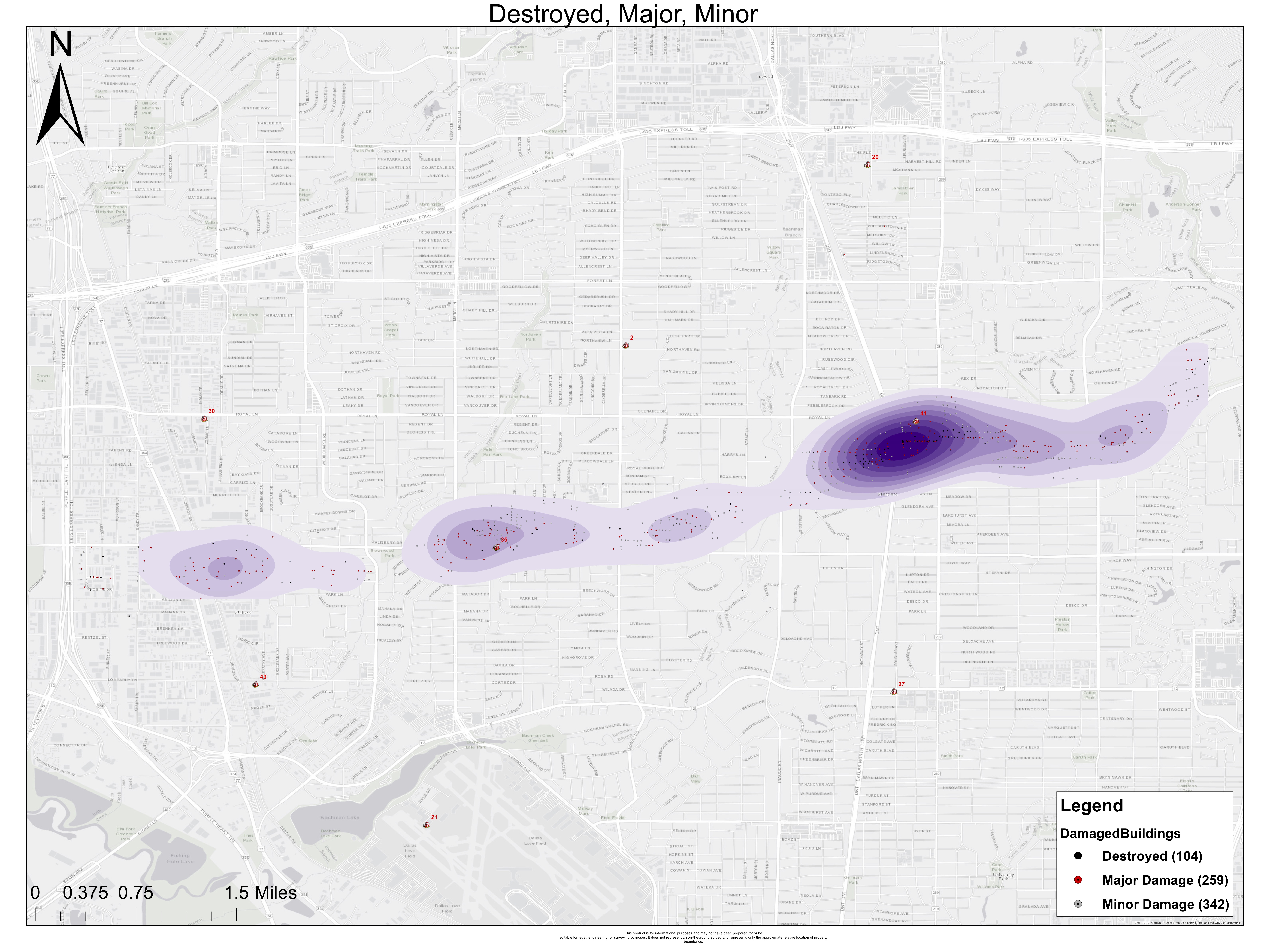 This heat map put together after assessing neighborhoods allows the city to prioritize areas by damage severity. (Click the image for a closer look.)

And then how do you transition after those things are accounted for? Tuesday, we started to get kind of a process in place. Tuesday afternoon, we had a lot more backup that showed up. Oncor had crews that came from other states. Yesterday morning, we activated these Convoy Strike teams. They’re a team of Oncor, Atmos, Dallas Water Utilities, Dallas PD, Dallas Fire-Rescue, Public Works, Transportation, Code, Sanitation, Parks, 311.

And then it’s these heat maps, with the darker colors being the most damaged. Yesterday morning down in emergency, we had maps that showed damaged areas, moderately damaged, and severely damaged. And there are these purple maps that show the heated areas. We started, in the darkest, worst area, we deployed these convoy teams. I saw a bunch of them out today at Marsh and Walnut Hill. They’re moving from area to area. I know it’s frustrating because people are like, ‘We need more help.’ But it’s triage, like an emergency room would do.

Yesterday, it became very systematic. We have it all laid out, all the assessment has been done. We know where all the damage is. We know the severity of all the damage.

What sort of response have you seen from people in the community? It’s almost overwhelming how many emails even my office individually has gotten. “How can I help” Or, “What can I do?” Today, I saw hundreds of people out at Home Depot at Marsh and Walnut Hill. There’s just an enormous response from people that want to help.