No one at KNON-FM remembers the exact time the tornado hit its North Dallas office building. It was halftime during the Cowboys game. That’s the best marker for those who were at the station when the EF-3 tornado touched down on Sunday night.

He was watching the game around 9 p.m. when he noticed the incoming weather tickers notifying him that something troublesome was coming. The 24-hour station was kicked off the air around that time, not long after the building lost power. DJ Chief Zehaie was in the building, determined to keep his program going even after Chaos called and ordered him to take cover. A DJ on any given night shift always stays to watch over the studio if the building goes dark.

Then the building shook. Another DJ, Spicoli, burst into the control room and grabbed Zehaie. KNON has been off the air since.

“The tornado’s coming!” Spicoli screamed. The men huddled in a break room with two others as the tornado decimated their studio around them.

Zehaie’s wife arrived as soon as she could safely reach the three-story office building at Northaven and Central to retrieve her shaken husband. Two days later, his cab is still there. The rest of the crew came as soon as they could too, surveying the damage and watching over the premises to guard against any “vultures” who might break into the building that now gapes open like a fresh cut.

“Right now, we have to get out of the building as quick as possible,” Chaos said on Monday afternoon. Volunteers were combing the space and removing memorabilia from the walls, bundling up equipment, and packing up whatever odds and ends could be salvaged. “The landlord feels the building is not suitable for occupancy and is urging us to get out ASAP. You look at the building, and you can’t argue with that.”

There is no power in the building. Wires and insulation poke out of the walls and out from under the station control consoles. Water has been pouring out of the other end of the building. The floor is completely flooded. The roof of the building was torn off, fully exposing what was once the third story ceiling to the now-clear sky above.

Chaos laughs while reflecting on the 36-year-old station’s prior efforts to stay operational. It’s moved several times over the last decade, stubbornly trying to remain a home for the community DJs that play everything from gospel to cumbia to metal at all hours of the day and night. Just as it has since the early 80s.

“The irony here is that the first building we were in was an old house in East Dallas on San Jacinto. That got knocked down. Then we moved to Maple Avenue and had to move because they were gonna knock it down,” Chaos said. “Odds are, they’re gonna knock this one down too.”

The broadcasting equipment was recovered and is in good condition. But finding another space to house it, hiring engineers to reset it, and then moving into that new location will “cost something,” as Chaos puts it. The largest cost will be the temporary space needed before another permanent location is even considered. KNON is eyeing a tower near Cedar Hill where it keeps its transmitter. But that’s still just a possibility.

“We’ll set up a makeshift studio as soon as possible, end of the week,” Chaos said. “My priority is to start broadcasting again.”

Chaos’ office wasn’t spared like many of the others in the building. He shuffled through the piles of glass and wood to see what of his belongings and papers hadn’t blown away. 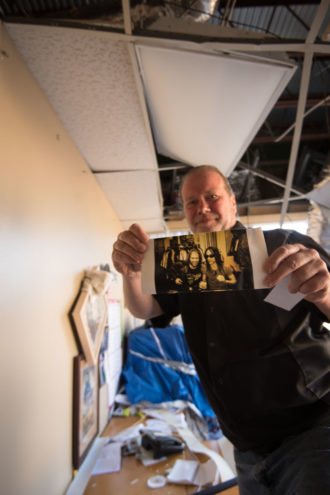 KNON station manager Dave Chaos holds a treasured photo of him interviewing Iggy Pop decades ago, which he feared was lost in the tornado. (Photo by Jordan Jarrett)

KNON station manager Dave Chaos' office was nearly destroyed during the tornado. (Photo by Jordan Jarrett)
On the left, Dave Chaos shows his treasured photo of him interviewing Iggy Pop. On the right, the aftermath in his office.

“The Iggy poster man! Iggy’s safe!” he hollers at one point. He unfolds a mildly tattered keepsake with delight: a lone photograph of Chaos interviewing Iggy Pop in the mid-nineties.

“Looks like Iggy’ll be all right,” Chaos said, leaning back and showing off his treasure from the ruins. “Wouldn’t be the first time Iggy and I got all torn up!”

Gene Soslo, host of “Notes From The Underground” — his 1960s rock segment on KNON — mirrors Chaos’ optimism. He notes that his show is Wednesdays at 8 p.m. Is, he says, not was.

“Our listeners are the only thing that keep us on air through donations,” Soslo said. “We have no commercial grants, no corporate grants, no government grants. It’s all listeners who have a discerning ear. They love what they hear from here. We’re just going to ask for a bit more here soon.”

November 1 traditionally marks the start of the station’s fall pledge drive. Listeners can make donations directly to the station’s relief efforts through the existing link on KNON’s website.

These Dallas Businesses Were Damaged In Sunday’s Storm