The home Michael Sharry has lived in for the last two decades is destroyed. Boards and branches pile up out back in the gap where the fence used to be. Light streams in through caved-in ceilings, blue from the tarps that failed to keep out all the rain. In some ungodly showing of the tornado’s power, a couple of interior doors were ripped clean off their hinges and now lean against a hallway wall and a computer desk. The whole place smells like mildew. Suffice to say the Sharrys won’t be living here on Orchid Lane, about a block from St. Mark’s School of Texas, any time soon.

Their search for a semi-permanent next residence is over. Soon, they’ll move into a place near the Dallas North Tollway and Northwest Highway. But it was complicated. The tornado poured demand into a usually sparse rental market in this affluent pocket of North Dallas. Residents have found short-term stays with friends or family or in hotels, but many face a long road before their homes are livable. With such limited supply of rental housing for the many families wanting to stick around the neighborhood, that has shot up prices. Some homeowners have also taken down for-sale signs and re-listed as rentals—with giant monthly price tags.

The Sharrys’ home, which looks fairly intact from the street, will either be a lengthy restoration or a total rebuild. That assessment is ongoing. Either way, Michael and his wife, Janice Sharry—both attorneys—have been told to expect displacement for at least a year. After exploring at least a dozen houses since Tuesday, the Sharrys signed a 12-month lease over the weekend. They were advised to move aggressively on a four-bedroom they liked, which was listed for $7,500 with another offer already on the table. They submitted an offer for $10,000 a month to beat it out. 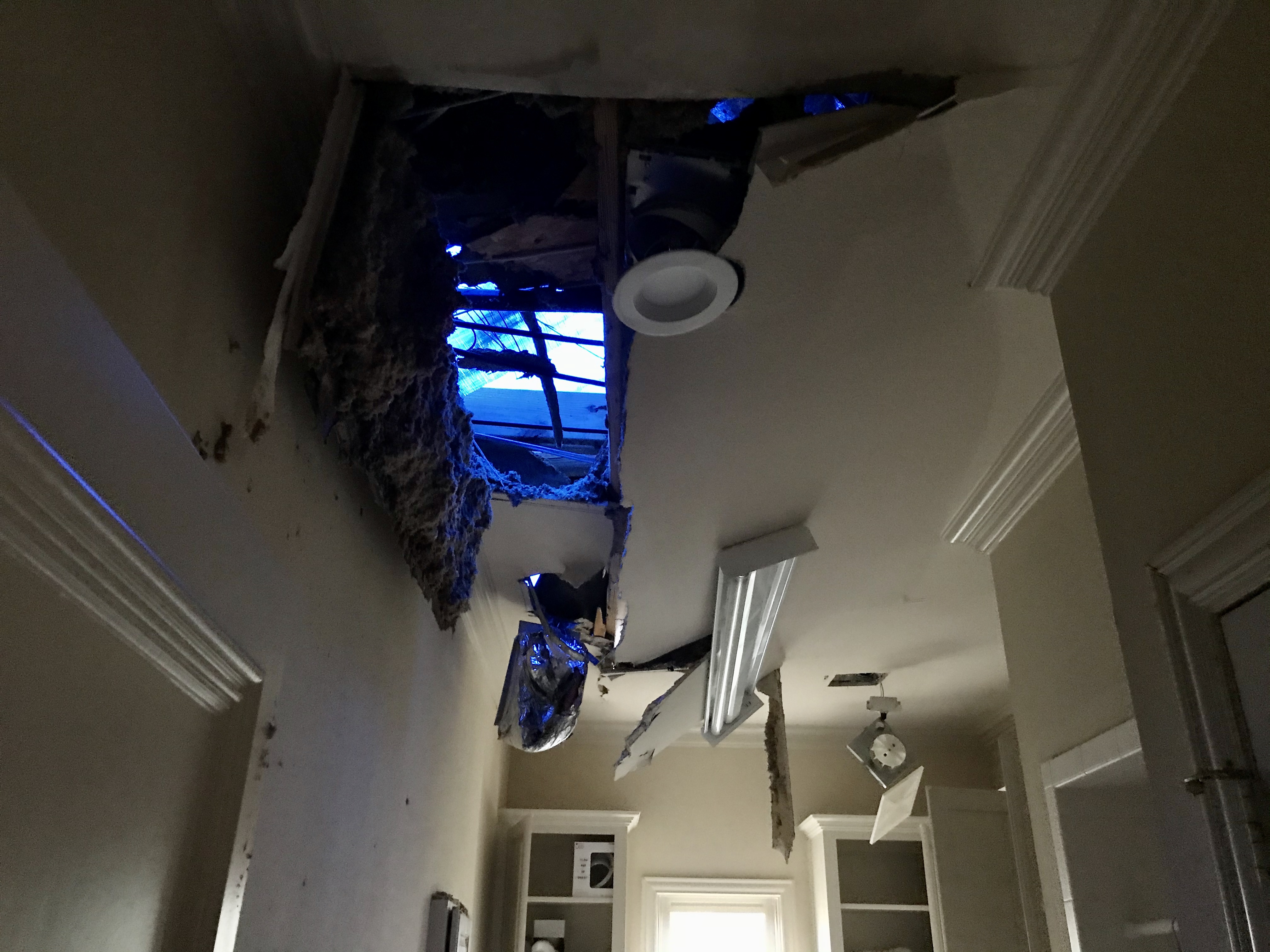 The caved-in roof in the Sharrys’ laundry room.
Shawn Shinneman

A quick search of rental websites seems to back up the Sharrys’ frustrating experience. Several homes for lease appear to have been increased well above normal asking. This four-bedroom on Royal Lane was pulled off the for-sale market Thursday—four days after the tornado—and listed for $10,000 a month. This three-bedroom off Hillcrest was re-listed at $6,500 after going for $5,000 back in May. This home on Azalea Lane was listed as a rental on Saturday, going for $8,500 a month. The price on this massive six-bedroom moved up to $20,000 a month—from $15,000—the day immediately following the storm. The description of this light-splashed home near Forest and Central Expressway still reads, “Lease the modern home of your dreams for under $5,000,” even though last week it went up to $8,000. (As you may see in those links, a couple of the homes appear to have been listed for sale again just today, so maybe the rental rush is starting to slow.)

These moves could be viewed either as gross opportunism in the face of destruction or as simple economics, the market correcting for a new need. (We’ve reached out to Zillow to try to get some more context on how widespread we’re talking, and we’ll update this story or post again when those numbers come in.) Michael Sharry says he can understand the logic: “Why sell it if I can get another $50,000, $60,000 profit out of it doing this?” he says. And he’s self-aware enough to see that there are many neighborhoods that would’ve been devastated far beyond what Preston Hollow residents are experiencing had the tornado taken a different path through Dallas.

The Sharrys have found other silver linings after the storm. Michael thinks about what would’ve happened if their daughter hadn’t called after hearing the sirens from Knox-Henderson—that, and the oddly flickering lights, were enough to move the couple into their kitchen pantry less than a minute before their bay window blew out, flinging glass under the pantry door.

“We’ve got to move on,” says Sharry. “Here, people can find a place to go. You can start over pretty quickly.”