The city of Dallas is ready to unveil a downtown park that has been a decade-and-a-half in the making. On October 14, the fences come down around Pacific Plaza, a 3.7-acre slice of green tucked into the shadow of One Dallas Center, touching Pacific Avenue as well as North St. Paul and North Harwood streets.

The amenities downtown Dallasites can expect: lots of lawn, a playground-ish area (space for kids and adults a like, the architect envisions), and a large circular pavilion. About 400 tons of limestone weaves through the park in extended blocks. And lunch-friendly tables and chairs speckle the park, particularly on a promenade along Harwood and over by what was previously known as Aston Park (now to be called Aston Grove), where there are already fully grown trees.

“It’s not designed to be, necessarily, a destination park like Klyde Warren,” says Amy Meadows.

Instead, Pacific is the first unveiling of a public-private partnership between Dallas and Parks For Downtown Dallas, the organization for which Meadows serves as president. To make four new parks a reality, Parks For Downtown Dallas brought $45 million to the table to pair with $35 million in 2017 bond funding. They envision the parks as neighborhood attractions that can shift the fabric of the city’s core, making it friendlier for people who need a break from their places of work and those who live in the neighborhood and own a dog.

“It’s really changing some of the culture downtown,” says Meadows. “So we’re not just a concrete commercial district where everybody’s in their cars.”

To jumpstart the proceedings, Dallas asked Parks for Downtown Dallas to provide the entire chunk of money for Pacific Plaza. Parks For Downtown Dallas agreed. It cost $15 million for design and construction. The organization has also set aside a $1 million endowment to put toward yearly maintenance.

The idea for Pacific Plaza dates to a master plan in 2004, shortly after Dallas lost out on Boeing to Chicago. If you let retired Parks Director Willis Winters tell it, that was the best thing to ever happen to downtown Dallas. “Some of the comments that come out of the selection decision made us take a really hard look at ourselves from an urban infrastructure standpoint,” he says. Those comments took to task the “quality of life in our downtown, and the quantity and quality of our green spaces and public spaces in downtown.”

In 2008, the city acquired the land. It was then a parking lot, and with no money to fulfill its vision as a park, it remained one. The master plan for our downtown parks received an update in 2013. And then in 2015, the Belo Foundation disbanded and reformed as Parks For Downtown Dallas. They then approached the city with their plan.

The success of Klyde Warren Park, which opened in 2012, has helped lift urban green space up the list of priorities, as well as bring private interests deeper into the conversation. People inside commercial real estate circles like to point to Klyde Warren as a catalyst; a report from JLL last year showed rents around the park have increased from around $29 per square foot when the park opened to closer to $40 in 2018.

“Companies in today’s world are focusing on employees and culture,” says Greg Biggs, a managing director with JLL’s Dallas office tenant rep team. “Green space allows companies within walking distance to provide an amenity they could never produce on their own.” 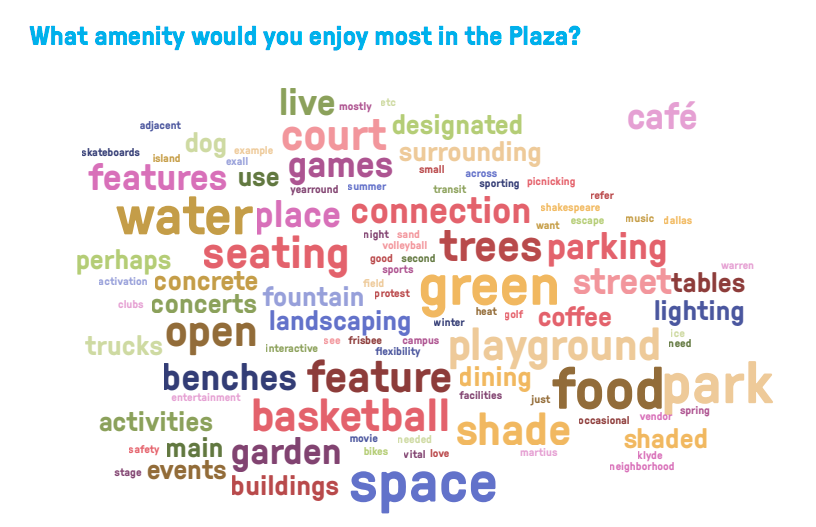 Pacific Plaza, of course, will not be Klyde Warren. It is a simpler park, and that has garnered some criticism. This report from 2016 runs through the tallies from the public input phase, and the word map above from that report will give you a sense of what people wanted. The glaring omissions in the result are basketball and water. Our Peter Simek’s beef was with a lack of recreation.

But Meadows, as well as lead landscape architect Chuck McDaniel, of SWA, say the park was built with public input at the front of mind. McDaniel says the design team decided against a fountain for budgetary reasons. They’d rather spend that money on shade.

To that end, the pavilion is the park’s defining characteristic, a stainless steel entrance to the green space featuring 11 columns. Architecture firm HKS is in charge of that. The design team punctured 58,290 holes in the pavilion canopy, a subtle, morse code tip of the cap denoting the names of 337 stops along the Texas and Pacific Railroad.

At the end of the day, Dallas has leveraged private dollars to turn a parking lot into a park—a “refuge of shade,” as McDaniel calls it, “in the urban heat island of downtown Dallas.”

Thompson Dallas can put you up in luxury for $10,000 per night.
By Tim Rogers
Coronavirus