But Fabric Alley is quiet at the moment. It is so badly damaged that it is almost impossible to reach by car. In the days following the storms, the main routes to reach the district—Harry Hines Boulevard and Walnut Hill Lane—have been blocked by a wall of local police and state troopers. In one recent attempt to reach the area, a gang unit officer is seen kicking a man out of a parking lot, shooing away his rumbling pickup truck as it drizzles above. As if last Sunday’s tornado was not enough, another downpour of rain tore through exposed roofs, only four nights later.

When it’s not eerie and bizarrely quiet in the aftermath, it’s tense. Traffic is painfully backed up on every side street, forcing cars to choke off already-suffering homeowners and their mountains of trees and debris. Parking and walking over a mile away is the only to reach most of these establishments.

Business owner Steve Braunstein is a familiar sight to Fashion Alley frequenters, often accompanied by his basset hound, Penney. Braunstein opened Super Textiles on Perth Street more than 30 years ago. He says he has not missed a Saturday at the shop since August 1988. Braunstein was celebrating his 69th birthday with friends on the night of the tornado, safely 10 minutes away in Farmers Branch. He was later awoken by a phone call from an employee named Ophelia. She has worked at Super Textiles for 28 years.

“She got in there with a friend of hers and she was trying to save all the fabric,” Braunstein recalled, reflecting on how much the business meant to Ophelia. “She was running around frantically and called me and said, ‘You got to have faith.’ That’s how she reacted to it.” His voice broke every few sentences.

Braunstein believes the business is a total loss.

“I easily lost $100- to $200,000 worth of shit, that is totally unsalvageable or was uninsurable to begin with,” he says.”I know my building is certainly going to be demolished and they’re going to have to rebuild. I wouldn’t be surprised if there are one or two others on that street—they may be able to just fix the roof—but I’m gone. There’s no way I can come back. This was the death knell for me.” 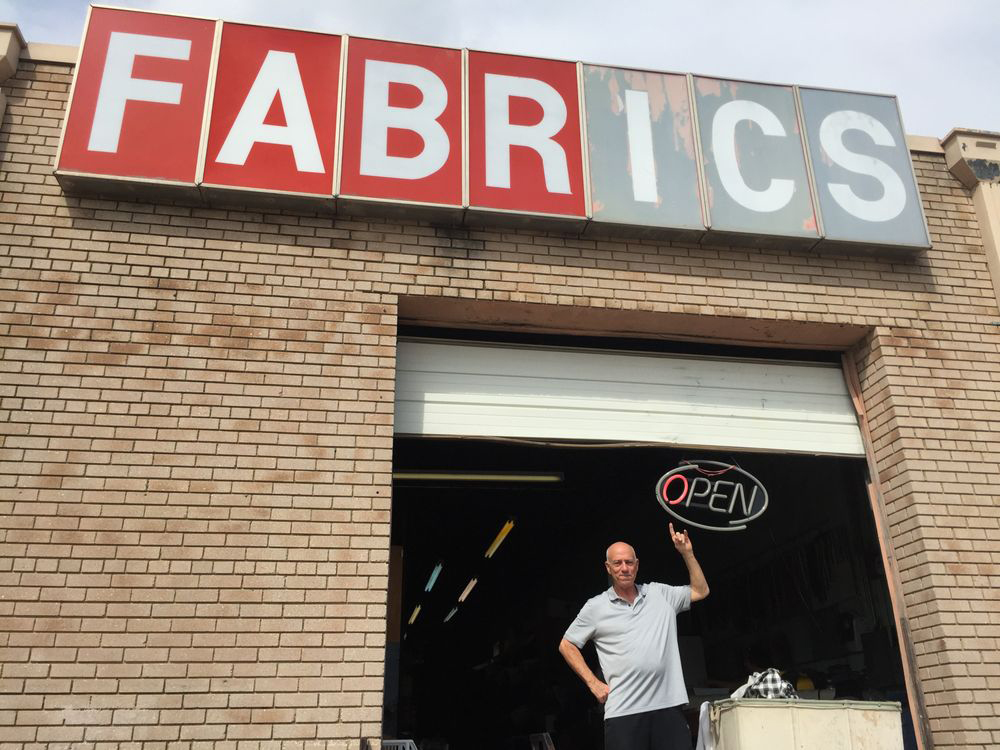 Super Textiles owner Steve Braunstein posing in the same place as the photograph at top this story, taken in 2016. (Photo courtesy Super Textiles)

Braunstein’s warehouse specializes in sewing notions, such as zippers and buttons. It was not a small selection. “When you think of a million just being a thousand thousands—buttons are deceiving with how many you can stuff in a box,” Braunstein says. “I had room after room.”

The fabric landscape was shifting when Braunstein opened up in the late 1980s. Textile production increasingly moved overseas, which left a glut of stateside product.

“It was the accumulation of the Dallas apparel industry’s devolution. They went out of business, one by one,” Braunstein says. “Just the way the fashion business goes. I thought it started to fall apart when we opened up 30 years ago. It was a unique opportunity that will really never present itself again. Kind of linking the ’80s and ’90s to where we are now. It was kind of a hole-in-the-wall place. But I liked it just like that.”

Wherehouse Fabrics also sits along Perth Street. Now a week after the storms, water still splashes to the floor many feet below the gaping holes in the roof. A group of men crowds around the front desk, offering suggestions on moving items out of the space. Despite all the obvious damage, Wherehouse Fabrics does not look as badly hit at some of the businesses on Perth and Harry Hines. When asked if he would be willing to discuss the state of the business, the man behind the counter shakes his head and stares at the ground. “I don’t think so, man,” he says.

Super Textiles itself, however, is basically impenetrable. It’s filled in by its own roof, walls, and eradicated inventory. “It looks like a war zone—like a bomb went off,” Braunstein says. “Buildings blown apart. Smelling gas. Pole lines down.”

Despite the efforts of some of his neighbors, he is not so sure Fabric Alley will return to former glories.

“It won’t be duplicated, and that whole street, that whole little Fabric Alley’s gone,” Braunstein says. “I think there’s one guy left that’s one of the majors, but he has illusions. He thinks he’s going to be open in a month. I think that place is closed ’til spring and when it opens—it’s going to be a different world.”

Since the tornado, there has been one bright spot near Perth St.: The beloved Golden D’or Fabrics on Harry Hines was able to open its doors on the Saturday after the storm, in less than a week. A Facebook post says Golden D’or received “minimal damage.” Multiple phone calls to Golden D’or were met with a repeat busy signal.

It was one of the only places in the area that seemed to be active during a visit over the weekend. Some of the industrial streets—such as Andjon Drive or Shady Trail—were capped on both ends by police officers. They are among the quietest experiences you’ll ever have in Dallas. The deafening silence found in these empty parking lots lined with steel fences swirled about like pasta could rival the most remote mountain top. 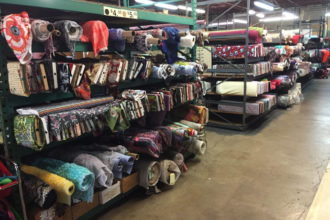 A sampling of the garments at Super Textiles, before the storm. (Photo by Julie Braunstein) 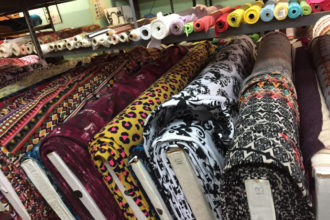 While the equally tragic but ultimately high-end mainstream retail in tonier neighborhoods will certainly roar back to life very soon, it’s easy to wonder what will become of a district so dominated by such niche interests. Should it return, Super Textiles’ Steve—or “Super Steve” as his loyal customers call him—knows one thing that is unlikely to change: the clientele.

“Mostly just nice people,” he says of the Perth Street crowd when asked to describe his regulars. “It wasn’t like dealing with lawyers.” Braunstein says a number of his customers have reached out to him since hearing news of the damaged shop. “Even my ex-wife called me,” he says.

The next day, Braunstein sent a follow-up message on the people he helped at Super Textiles over the past 31 years, saying that they suddenly came rushing back to memory, or as he puts it, “so many faces visited last night.”

Fashion students and crafty/boutique biz. Quilters and church ladies doing charity (recently making cloth dolls to send to the border). From Folklorico to bridesmaids, costumes for theatre or cosplay. Guys needing vinyl and dutiful husband follows wife for home decor. The African girls from Nigeria to Ethiopia. The Subcontinent and Vietnam. So many people will be greatly missed.”