Jordan Jasper’s phone wouldn’t stop buzzing that Sunday night. The Home Depot operations manager typically gives it a glance and a left swipe, but this time the alerts kept coming after he returned it to his pocket: a severe thunderstorm warning, a tornado watch. He didn’t know that every local news station’s meteorologist had begun urging viewers to take shelter. He was at work, just off Forest Lane and Central. He knew a storm was coming and that he was responsible for nine associates. So he made a rather simple decision.

He closed the store and sent four of his employees home at 8 p.m., Home Depot’s standard Sunday closing time. The whole crew would’ve usually stuck around until at least 9:30 p.m., with customers often allowed to linger until around 8:30. Forty-two minutes after closing, he and the other five locked the last door and set the alarm. He got the money out of the registers, but didn’t finish taking out the trash. He’d left some pallets of product outside. Usually, he wouldn’t leave before those tasks were finished. But he figured there would be time for that in the morning.

“We needed to pick up the pace,” he said. “The storm was coming sooner than expected.”

Jasper climbed in his Honda Accord and drove around the building, doing one last check, making sure none of his colleagues’ vehicles were still there. He then turned toward Forest Lane, taking a right on the Central Expressway frontage road and heading north to his home near the town of Greenville, just as he always does.

About an hour later, that Home Depot was rubble. It was among the earliest signs that the 10 tornadoes that tore through Dallas and its neighbors would leave lasting damage. If you weren’t in the tornado’s path, it was difficult to tell that night how bad it would be. Images of the Home Depot—now a gaping shell of twisted metal—made the severity real for the whole city.

Jasper didn’t know that. He was on Central heading north, trying to make out what his boss was asking him over the blaring winds whipping against his car.

“He wasn’t frantic, but he was stern,” Jasper says. “‘Did you get everyone out of the store? Are you sure?’” 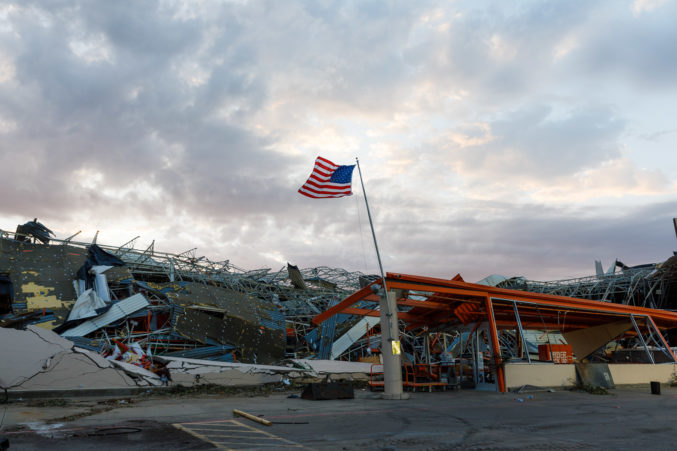 What was left of the Home Depot after 10 tornadoes rampaged through North Texas in October. (Photo by Hoyoung Lee)

His wife called. She urged him to take shelter at a gas station or a nearby Walmart. He took his chances, figuring he was driving far enough north to miss it. A tree flew into the passenger side door. Debris littered his windshield. Things got smoother after he veered east toward home, away from Central. He made it to his house about an hour northeast of Dallas and flew inside, helping his wife corral their three kids—they’re five years old, three years old, and four months—into their bathtub. Heavy winds knocked out his alarm system and took the power offline. Then his operations manager from Plano called.

The storm now east of them, Jasper and his wife got back in his Accord and headed toward Forest Lane. He still thought he could help get the store operable; he figured it would be needed the next morning. That Home Depot location has suffered severe hail and an in-store shooting that took the life of a police officer. It still opened the following days. But this time, the tornado had leveled it. Besides a pergola, all that was remaining was, strangely, the American flag, which was still flying over the building’s gutted remains. The roof was gone. Crushed metal beams spanned the length of its entrance. The sheet of orange-painted metal outside the contractor’s entrance had been peeled back like a bandage. Sprinklers and rain doused what product remained.

“But just because we can’t clock in doesn’t mean we can’t be here helping out,” Jasper said. 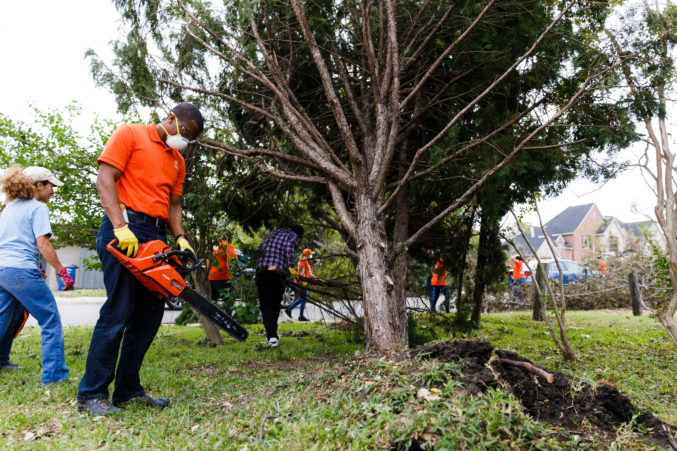 Jordan Jasper takes control of a chainsaw to help the tornado-damaged neighborhoods near his Home Depot. (Photo by Hoyoung Lee)

The next day, the store’s army of orange spread out into the neighborhoods around Walnut Hill and Marsh, clearing debris with what equipment they could salvage. “Home Depot has chainsaws and people who know how to use them and like to use them,” Jasper says. “I was not designated to use one, but when that person walked away from the chainsaw, I put it to work.” Jasper split the store’s 160 employees into three and transferred them to other nearby stores, unless they’d prefer to work elsewhere.

And the Monday after the storm, Home Depot presented that flag to Jasper. He’d helped bring it down; the original plan was for it to be displayed at Home Depot’s headquarters in Atlanta. Even lowering it was an emotional moment for him.

“I’m the only one in my family who didn’t go into the military, so it was an honor to take it down,” he said.

The framed flag now rests on his mantle, next to his manager’s keyring. They’ll never be used again, but it’s a reminder of the occasional power of simple decisions—like closing up early when the skies get ominous.