Correction: An alert FrontBurnian noted that I had the wrong value on the SMU Tennis Complex. It is part of a $200 million investment in new and enhanced facilities made by the university over the last two decades.

Where to even start? There is just so much tennis to report today.

At first, I was going to simply relate Zac Crain’s idea last week to re-create Spike Jonze’s “Guerilla Tennis” Nike commercial from 1995, featuring Andre Agassi and Peter Sampras emerging from a taxi to take to what appears to be the NYC streets (except, as Zac pointed out, it’s really San Fran) to play a rousing game of tennis until the impromptu net is taken out by a city bus.

The question was, who should our two players be? I suggested Dirk Nowitzki, whose Pro Celebrity Tennis Classic will be at SMU on Sunday, September 15. It’s a great event where you can watch the likes of Tommy Haas, Mark Knowles, Steve Nash, Boris Kodjoe, and Dirk battle it out on the university’s outdoor courts from up close.

Then I suggested maybe a couple of SMU tennis players, like Tiffany Hollebeck, former Plano West champion, and Emma Pieroni, a Highland Park High School grad. But then we got distracted by Tim Rogers’ story about almost getting killed by a scooter or something.

Meanwhile, last Thursday, the SMU Tennis Complex was honored with the 2019 USTA Outstanding Facility Award at the annual meeting in NYC. Not to brag, but I play there at least once a week, so I can attest that the facility is pretty awesome. (I do have one complaint: the indoor courts were designed without public restrooms on the ground floor, and the player locker rooms are, as they should be, locked. So when you come to hit after work like I do, and you need to change, you have to go in the one single stall bathroom that has been left open on the women’s side. Which means men are constantly opening the door and then acting shocked, as if they assumed that the only open bathroom must be exclusively for men even though it is actually on the women’s side of the facility. But I digress.) 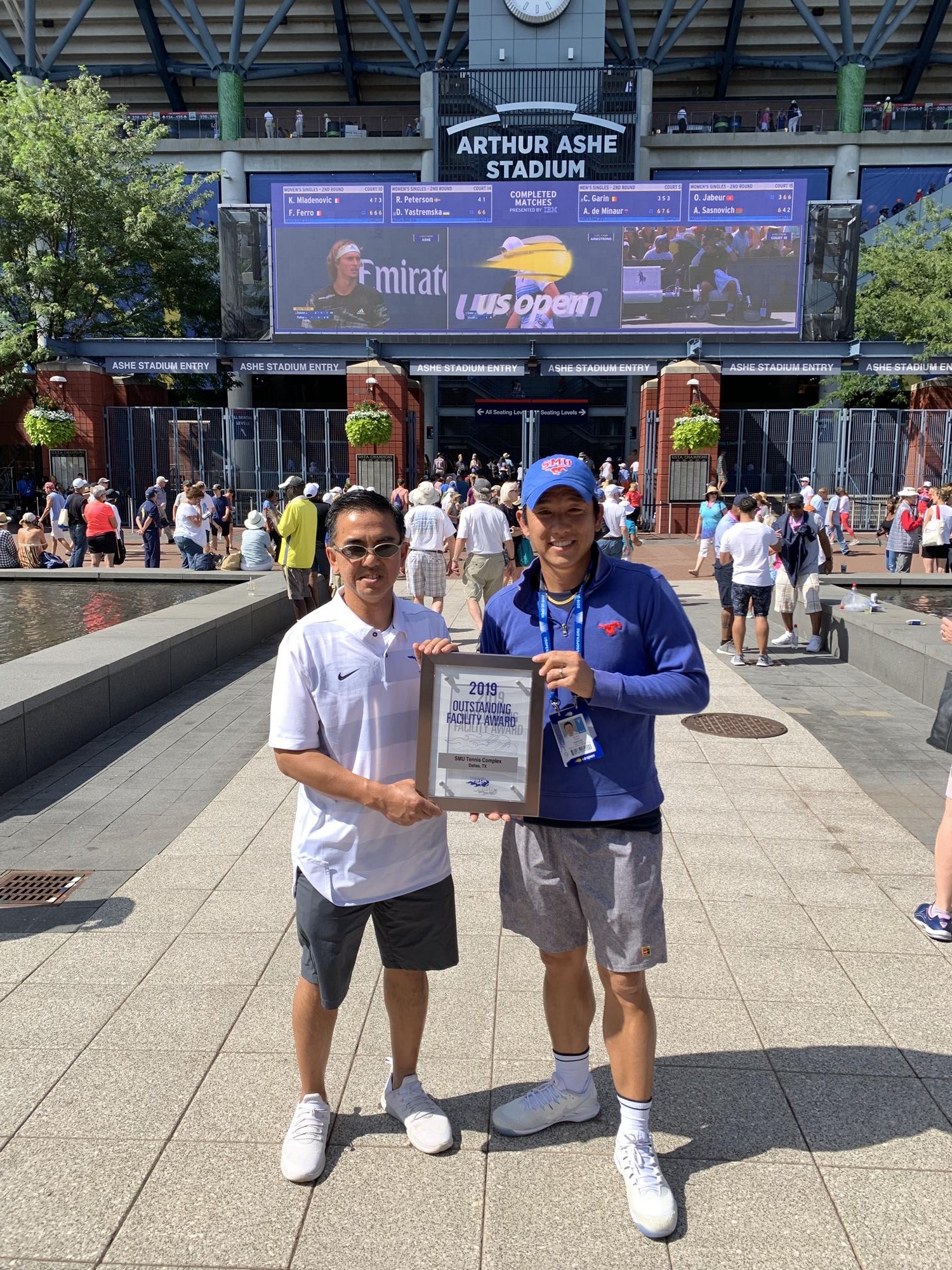 Rex Cuajunco, the SMU Tennis Complex’s director of operations (you may remember him from the Village Tennis Center), and Grant Chen, the head men’s coach, were on hand to accept the award. And, yes, that intense guy in the black-and-white SMU hat that they kept showing in Grigor Dimitrov’s box during that crazy match against Federer on Tuesday night was also Grant Chen. Hopefully he’ll be at the semis on Friday cheering Dimitrov on against Medvedev, cuz nobody likes that guy.

Medvedev is in a foul mood, throws a tantrum at the towel guy then throws his racket when the code violation is announced #USOpen pic.twitter.com/YyNtfbR0ry

Other celebrity sightings at the Open included former San Antonio Spur Manu Ginobili, who, like Dirk, has taken up tennis in retirement; and Tom Hiddleston, star of Thor and Avengers, who I was close enough to hit with a tater tot while watching the Konta-Pliskova match.

And, FINALLY, Oracle, a California-based technology company, just announced that they are going to sponsor a new pro series that will add 25 new ATP, WTA, and ITF World Tennis Tour professional tournaments throughout 2019 and 2020. What does that have to do with Dallas, you ask? Well, the October 20–27 tournament will be hosted here, with the men’s portion held at TCU and the women’s at SMU.

The extra good news is that for public events, the public restrooms at SMU are always open.