On Tuesday, about 200 residents of Fair Park and elsewhere in the city filed into the park’s Women’s Building to have their voices heard. Over the course of a couple hours—and after a brief presentation—they wrote out priorities for the revitalization and placed them on poster boards that formed a circle around a room locked in conversation. They asked for the art deco architecture to remain and for it to be accentuated. They asked for cars to be banished to the park’s perimeter and they called for bike trails. They asked for a grocery store or farmer’s market, for family activities, for a swimming pool, and for a more traditional park that they could make a full day out of.

About 10 months after the City Council voted to privatize the park, its new managers say their top priority is community input. Over the next nine or so months, Fair Park First, subcontracting with Spectra, will take input from the community and other stakeholders and put it to use in updating a 16-year-old master plan for the park. Then, they’ll take that plan first to the Park Board and then to City Council. For its efforts, the city will pay Spectra $35 million over 10 years, a contract set in motion after months of heavy debate around the horseshoe.

The master plan will guide Fair Park’s approach to things like events, buildings, transportation, marketing, and green space. It will enable Fair Park First to go fundraise. A report by AECOM said capital improvements could cost $250 million, but Darren James, the organization’s board president, says he wants the master plan finished before launching a capital campaign. That way, you don’t earmark funds that end up running counter to the vision. 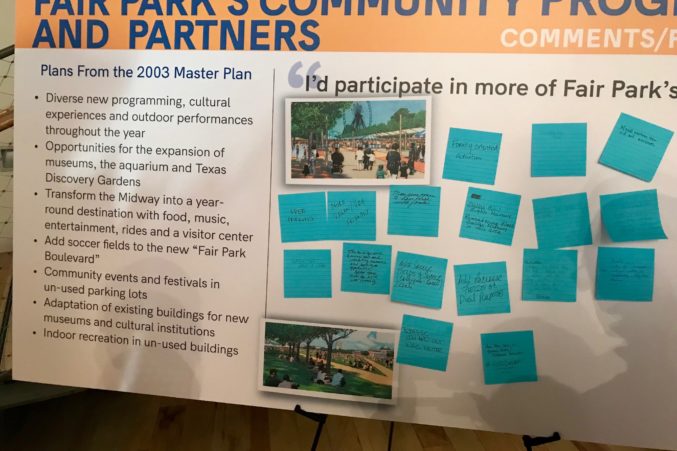 Thoughts from the community about what to do with Fair Park. (Photo by Shawn Shinneman)

And the plan will chart the future of the park as an asset the city hopes will be used year-round, rather than stuffed full of people for the State Fair and select events but otherwise forgotten. “Not necessarily buying a ticket for a concert or coming here for 4th of July, but being able to come here because it’s Tuesday or it’s 1 p.m. on Saturday,” says Rodrigo Rodarte, a project manager for Biederman Redevelopment Ventures who was on hand Tuesday. BRV is working to design and build the project.

“We’re operating on two simultaneous tracks, one of which is this longer term view for the park beyond just the day-to-day operations,” says Rodarte. The other track is more pressing, putting into place immediate and more moderate changes that can expand the uses of the park to more people and more days of the week. “A ping pong table, or something like that,” he says. “We don’t need to wait until the master plan is done to do those.”

Longer term, BRV will assess the connectivity to and around the park, meaning the accessibility on foot and on bike and by car, but also meaning non-physical access: who events are targeted toward and in what language, how much things cost, and how people find out about park happenings. Setting those paths will take community input.

James says that he was happy to see the turnout on Tuesday. About 180 people pre-registered, and at least a couple dozen registered on site. Fair Park First has kept good on its promise to hire from the surrounding communities, as well. While city staff helped out during an initial period, he says the organization has made about 30 local hires to fill out its staff of about 50 people. But the number of sticky notes on poster board Tuesday only underscored the challenge ahead.