In July, a very cool thing happened at a library in North Dallas. A group of artists got together and re-thought Dallas, the TV show that the whole world knows us for. What if it looked more like the city in which we live today? (Read: a lot less white.) What if it actually felt like what’s going on in the city? (Read: a lot more news and local topics written into the plot, like housing and public corruption.) And what if it was really, really funny?

That was Dallas The Remix, a trenchant, often hilarious reading that brought the city’s most well-known cultural export (ugh) into the present day. The play is structured like a 42 minute episode. There are more people of color in the cast than there are white people, and J.R. Ewing is played by a black man with a gold grill and the best laugh in Dallas County. It was supposed to be a one-time thing, but it felt to us at D to be a disservice that only an audience tucked into a small black box theatre got to see it. So we’re bringing it to D Magazine HQ next week. Here’s a little taste of what to expect, from our online arts editor Natalie Gempel:

The crew watched the first few episodes of the show together to get familiar. Then they took the character names and the soap opera tone and ran with their own interpretation. Teresa, who was a maid with no lines in the TV show, is a successful business person and a central character, portrayed by Priscilla Rice. Tilly, another one of the very few minority characters in the original Dallas, also has a larger role in The Remix.

[The writers] reworked the storylines to include local political issues and history, attending community meetings and interviewing longtime Dallas residents to get a feel for the era. Contrived as Dallas was, some of the plot points of the TV show proved to be lasting threads in the fabric of the city. 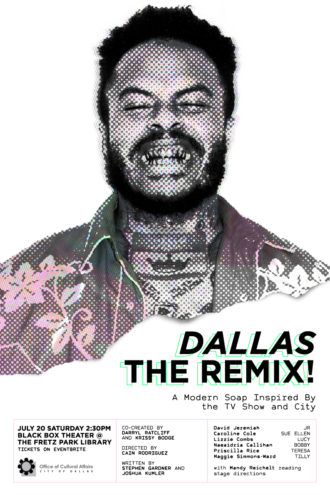 The piece was written by Joshua Kumler and Stephen Gardner of Bar Politics fame, which we once called The Daily Show of Dallas. Trust me. It’s good. And here’s a KERA interview with two of the creators that can give you even more insight about why you should come.

I’d encourage you to read Natalie’s preview of the original piece, and if that piques your interest, head right here for tickets. The event is on September 4 at 6 p.m.

Your ticket includes free beer, wine, and food, and the price is less than a bar tab at happy hour. All the proceeds go to the artists. Plus, I’ll be leading a conversation with the creators right after. You like conversations, right?