The city of Dallas is finally closing in on clearing the last of the debris from the June 9 storm that downed trees across the city, knocked out power for hundreds of thousands of people, and left an expensive mess in its wake. By August 3, crews will have collected from every part of Dallas.

A clearer picture of the damage has emerged. Initial estimates put storm-related debris at 500,000 cubic yards—already about five times the citywide monthly bulk and brush trash collection haul—most of it tree-related. The new working estimate is 650,000 cubic yards.

The city already doubled its pick-up crew by hiring contractors and suspending non-storm-related bulk pick-up though the month of July. It has established a satellite staging location to store brush while another contractor grinds it down and hauls it away. 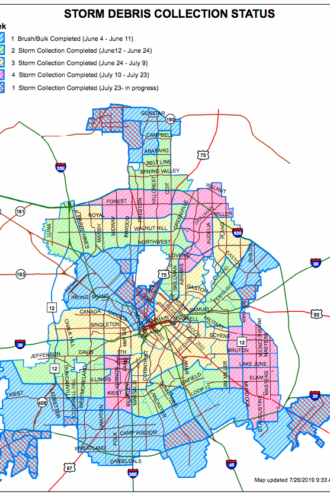 The city is hitting the blue zones this week and will re-sweep the green zones next week.

Still, the sheer volume means the effort will likely stretch past two months in all. After crews finish with the fourth and final city zone this Saturday, contractors will stay on to re-sweep the first zone it hit after the storm (seen in green at left), when not all homeowners had brought debris to the curb. Normal bulk and brush collection will resume on August 5.

“The amount, whether it was 500,000 (cubic yards) or 650,000, it’s shocking,” says Assistant City Manager Joey Zapata. He says he’s never seen a comparable storm aftermath in Dallas. One contributing factor could be how much time had passed since the most recent major event. “The longer you go between these kinds of storms, the higher the likelihood that you have trees out there that haven’t been pruned, haven’t been managed.”

The city has fielded plenty of complaints along the way. Zapata maintains that adding even more contractors would’ve been too costly for an unanticipated project that has already required the city to spend millions of dollars of its reserves. He eventually plans to bring a presentation to City Council about final costs and takeaways from the experience.

He admits that there’s room for improvement when it comes to communication. Zapata has provided weekly updates via memos to the mayor and Council, but the messages don’t always reach residents.

“We hear peoples’ frustration and we’re coming, still. We’re still out there and we’re still picking it up,” he says. “We’re learning in real-time and we’re going to be a better organization for it.”