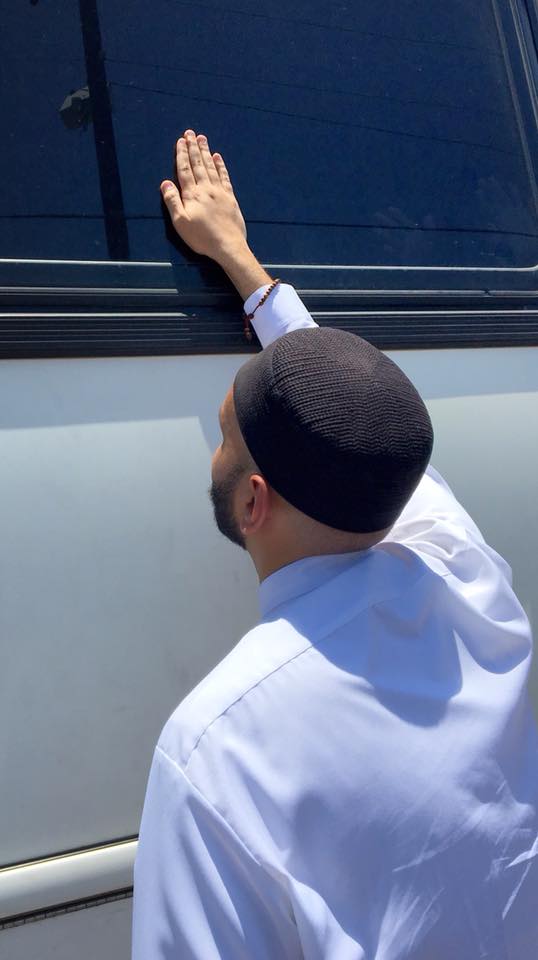 Suleiman in McAllen, raising a hand to migrant children on a bus. (Nye Armstrong via Facebook)

Editor’s note: Suleiman is headed to El Paso this weekend for what he and other faith leaders are calling Moral Monday at the Borderlands. More information can be found here.

If you solely judge us by our immigration and refugee policies, the United States has recently portrayed a cruel and unwelcoming image to nations across the world. Our federal government has shown this at the U.S.-Mexico border—where 18-year-old U.S. citizen and Dallas resident Francisco Galicia has been detained for more than three weeks—and particularly here in Dallas.  Dallas has the largest amount of ICE raids in the nation, and had the largest amount of detainees at its airport in the immediate aftermath of the Muslim ban. As faith leaders and activists in Dallas, we despise the reputation, but we also welcome the opportunity to lead the nation in an unprecedented fashion to create policies that are compassionate to immigrants entering our country.

A couple of months ago, I attended a roundtable with presidential candidate Beto O’Rourke as he revealed his comprehensive immigration reform plan. What stood out to me wasn’t just the immediate repeal of the Muslim ban or the protection of DACA recipients, but his proposed “community visa” that would allow communities to sponsor migrants in ways similar to the Canadian refugee system. This allows private citizens or organizations to sponsor and resettle refugees. Many of our communities around the nation would revel in such an opportunity to host these blessed souls that have been dehumanized for far too long, and who have been subjected to cruel policies that fail to reflect the kindness and diversity that are key pillars of our American democracy.

When the family separation policy was issued, Dallas County Judge Clay Jenkins immediately called upon the federal government to allow us to take in those children while we fought the abusive policies that displaced them. As faith leaders, we immediately started to envision what it would look like to host them here and started to prepare a response team. We scouted out which churches, mosques, and synagogues could host the migrants with the best accommodations possible, and played out multiple scenarios of interfaith cooperation to meet their needs while they would be here. There were communities around the country that expressed a similar desire to host them, including an Islamic Center in Florida that said they’d even bear the transportation costs. In the meantime, we decided to travel to the Texas border in McAllen and also the California border with Tijuana to show love to the families there alongside activists from around the country.

We were separated from them physically by cages, walls, and windows, but still wanted to show our support. Judge Jenkins was then able to get permission for a group of us from Dallas to travel specifically to Tornillo, Texas, and provide pastoral support to kids being held in tents. We took coloring books, games, and arts and crafts. We wanted to be there for them in whatever way we could.

Then, finally, we got our chance to actually host these blessed souls in our city of Dallas. On Saturday, June 8, after a 2,000-mile journey through Mexico, a group of migrants arrived by bus to be sheltered at the Oak Lawn United Methodist Church. Oak Lawn has led the way as a shelter for the homeless in Dallas on freezing nights, and is now leading the way in sheltering the stateless in the same spirit of refuge. Dallas Responds, an initiative launched through Faith Forward Dallas at Thanksgiving Square, was commissioned to bring together numerous faith groups to coordinate the logistics, from food to lodging to connecting with sponsors to medical treatment to reunification to transport, and so on.

When the migrants arrived, they descended from the bus in tears and found us in the same state. They hugged each one of us and clearly felt a great sense of relief, though their journey is far from over. When they got into the church, they found a full operation of willing volunteers of all faiths, specialties, and backgrounds ready to give them their all. We see this as divine mandate to shower these families with the love they should’ve been shown at the border. We facilitated their connection to bus stations, hotels, and airports to give them the most comfortable transition to their sponsors. We’re now awaiting the opportunity to host the next group as policies permit.

Let me be clear, the ultimate solution that we seek is an end to child detention and a better path forward for immigrants and asylum seekers. Through this particular action, we seek to prove that our hearts are bigger than our immigration policies. That every human being deserves to live in dignity. That in Dallas, where we continually have been led down the wrong path, we can work together to do right by our immigrant brothers and sisters. That in the United States, we truly do welcome the poor tired masses yearning to be free. That we do not feel burdened by our brothers and sisters, but instead honored to serve them. That our immigration policies should allow room for communities like ours around the nation to come together and sponsor these asylum seekers not just to give them the best possible accommodations, but to give us the opportunity to rise to the best version of ourselves.

Imam Omar Suleiman is an American Muslim scholar, activist, and civil rights leader. He is the founder and president of the Yaqeen Institute for Islamic Research and an adjunct professor of Islamic studies in the graduate liberal studies program at SMU. He also serves on the leadership council of Faith Forward Dallas at Thanksgiving Square.