Enjoy unlimited access to all of our incredible journalism, in print and digital.
Subscribe Now
Advertisement
Development

Let’s Check In on That Planned Mixed-Use Development on Henderson Ave.

In April 2018, the City Council finally approved developer Mark Masinter’s plan for a sprawling mixed-use development on a barren stretch of funky Henderson Avenue from Glencoe Street to McMillan Avenue. It was a long, hard battle—the “New Hampshire primary,” is how he describes it.

The 156,500-square-foot project has about 12,000 square feet earmarked for restaurants. The rest is an even split between office and retail. You’ll likely recognize the location as the empty field that has featured varied small pieces of public art over the years.

Masinter said after the Council’s approval that construction could begin as early as the end of 2018, but making that happen has proved no small task. Masinter says the reason for the delay is the design work, which has taken longer than expected. His firm, Open Realty, now hopes to start construction during the fourth quarter of 2019, about a year after those initial plans. That would set things for completion during the second half of 2021.

“I want to get it right,” he says. “There are certain buildings where we’ve gone, ‘We want it to be like this,’ and all of a sudden we go, ‘No, no, no, no, no, that’s not good enough.’ The problem is, even though it looks like we’re doing simple construction, and we are, once you start you can’t stop.

It took a few weeks, but after I’d missed him for my recent story about the city’s efforts to boost walkability along Henderson Avenue, Masinter sat down with me inside his Uptown office.

Nobody outside City Hall holds more weight in shaping the future of Henderson Avenue than Masinter. From Central Expressway to Ross, Henderson is marked by Open Realty ownership. The buildings occupied by Fireside Pies, The Porch, Skellig, Warby Parker, Gemma, Bonobos, HighFives, Sprouts—all those, and several more, sit in its portfolio.

Masinter has been buying up properties for the better part of a decade, looking to create something like Charleston’s King Street, Portland’s 23rd Street, or Venice’s Abbot Kinney. When I mentioned that I used to live in Chicago, he threw out Lincoln Park: “Those great neighborhood streets and that experience is a perfect example of what I hope this feels like when these buildings are completed,” he says. He says he’s looking to create a place that celebrates the street’s heritage and existing spirit.

There will be green space, wide sidewalks, and much public art. Open Realty will build out the Velvet Taco-adjacent wall of the angular building currently occupied by PlanetBlue, for instance, and add a giant wall for a rotating mural done by a local artist. It’ll rotate in and out every couple of months. Austin-based boot brand Tecovas has signed a lease to move in to what looks to be a three-tenant set-up. This is all closer to Central Expressway than to the plot we’re discussing, but Open Realty is planning similar installations for the new development. The long-term goals are to create a cohesive feel the whole way down the street.

“What Dallas doesn’t need is another commercial place to go buy shit. Who cares,” he says. “But if all the sudden you can weave in things that are interesting and celebrate local culture, which is really important, people all of a sudden say, ‘Let’s go stroll Henderson, because every couple months they have interesting things popping up.’

“And they roll into here and get a drink, or roll over here and hang out in the park. I’m trying to create what used to be important to a lot of people, which is a neighborhood.”

It took some convincing, but after years of meetings with neighborhood associations and Council members, the development received support from 104 property owners within 500 feet of the development compared to opposition from 22 property owners. Nearly 60 percent answered the notice form the City Plan Commission.

Most dissent came outside that geographic range, and indeed some of the loudest folks at that Council meeting on April 11, 2018—the day Masinter would ultimately earn a commercial change from the land zoned residential—voiced their displeasure with Masinter’s plans.

They complained about parking and said creating foot traffic along such a busy thoroughfare would be dangerous. They mentioned the quaint neighborhoods to its north and south and their mature trees and old houses. After previous tweaks to bring down the height and space of the development, one particularly exuberant gentleman waved a finger and said that any compromise to allow Masinter’s plan would be a compromise “forced by one thing, the abject terror that we feel.”

Things got a little uncouth, but the root of the concern was that people saw their neighborhood slipping away. More retail, more restaurants, more development—the opposition didn’t want all that. Thanks to Open Realty, which owns the building, the eclectic and one-of-a-kind Beauty Bar was already departing. Meanwhile, that stretch of the block had recently gained the Eberhard, a big club that thumped and served bottles, something resembling the large-scale opposite of Beauty Bar’s dance music and rap, plastic cups and Lone Star tallboys. 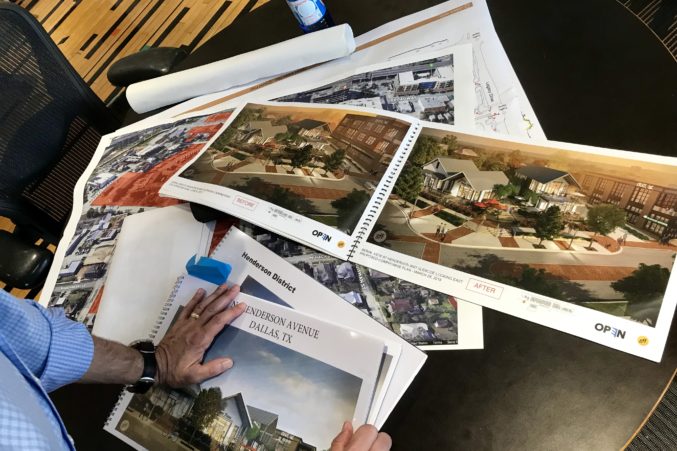 Beauty Bar is being used for pop-ups until it gets looped in with Open Realty’s larger plans for the development, and Eberhard has since died and been knocked down. There, contractors are building a massive space for Irish bar Jack & Ginger’s and a Caribbean spot named 77 Degrees. It’s giant, with a multi-level rooftop.

Masinter and his partners shrug it off. “It’s the opposite of our vision,” he says.

Two ways you could really piss off the neighbors: One, you turn the neighborhood into Plano, or even Knox. Two, you make it 2017 Uptown, where loiterers drank beer in parking lots and residents complained of trash left after raucous weekends.

Masinter appears to want to avoid both. He says he’s being choosy about his tenants. He wants to make this a place to hang out—a couple cafes, maybe another coffee shop, a little park. He has no bar space in the new development, anyway, just restaurants that must have at least 50 percent of sales come from food. Henderson will get more developed and, thus, busier. It’ll also become more walkable. Masinter says his vision is to magnify what makes this pocket of Dallas what it is, not lose it.

“I have very strong convictions about delivering what I promised I would deliver, which is something interesting and thoughtful that tipped its hat to both the neighborhood and its heritage,” he says. “It becomes a very purposeful decision now, why people live east of Central Expressway. You go over the Expressway, it’s different. Lakewood is very different than the Park Cities and Preston Hollow. People make that decision to move there purposefully. My approach is going to be purposeful.”

Dallas’ most important news stories of the week, delivered to your inbox each Sunday.
Henderson Avenue Mark Masinter Open Realty

No Big Deal, Just Naomi Osaka at the Dallas Open

The four-time Grand Slam champion brought some added attention to the new tournament. That’s exactly what it needs.
By Mike Piellucci
Tennis

Tennis Trivia! Where Is the Dallas Open Played?

This is a tricky question. Think it over.
By Tim Rogers
Real Estate

This gem of a home offers three bedrooms, a sauna, a media room, and a backyard oasis.
By Emily Heft
D Magazine Directories