Dallas has a $9 billion asset that it hasn’t been properly managing. The public learned that the hard way earlier this month, when 70 mile-per-hour winds shot down into the earth and uprooted thousands of mature trees all over the city. They fell on power lines and homes and vehicles and utility poles. What were once oaks and cottonwoods and pecans were turned into browning piles, stacked neatly near curbs awaiting their future as mulch.

We know the city’s urban canopy is worth $9 billion because the nonprofit Texas Trees Foundation raised enough money to study how many trees exist in the city (14.7 million), how they’re distributed (37 percent are south of I-30), and the environmental benefits these bring us (the annual capture of almost 60 million cubic feet of stormwater runoff—that saves $4 million in repairs—and storage of 2 million tons of carbon—that’s good for $137 million in savings).

The next step is something that the city has never had: an Urban Forest Management Plan, which would establish processes for keeping the existing trees healthy, identify the best places to plant additional trees to mitigate heat, and possibly reassign city staff to better maintain the canopy. This isn’t for the Trinity Forest either, where a management plan was created more than 10 years ago and sits unused. This is for the rest of the city, where the trees are vulnerable because of development and a lack of care.

“We have a lot of great things going on internally here at the city, but we also have resources that exist like our reforestation fund, which hasn’t been used as much as it should be,” says James McGuire, the city’s director of environmental quality and sustainability. “What’s lacking is something that will allow us to coordinate those efforts, measure year in, year out how many trees we’re adding, whether we’re taking care of our urban canopy or not, and something that would allow us to respond to events like the last few weekends.”

The City Council was notified in a memo today that staff has engaged Texas Trees to create this management plan. The total cost is $230,000, with the city pitching in $50,000 from the reforestation fund that McGuire mentioned in the quote above. Texas Trees raised the rest itself. “Once developed, an UFMP will help make us a resilient, proactive, tree-smart city that recognizes a robust urban tree canopy as one of our primary tools in combating the urban heat island effect and climate change,” the memo reads.

This is the final domino for the work Texas Trees has done over the last decade. In 2009, the nonprofit published its urban canopy study, which was the first time any organization bothered to look at what Dallas had. The Urban Dallas Forestry report broke down what that canopy is made up of, finding that 90 percent of what exists north of downtown was planted as single-family housing grew. (This is also when we put dollars to what the canopy was worth.) The organization also helped the city update its Article X ordinance, which was supposed to help guide how developers manage and plant trees. (The overhaul included such things as mandating developers not plant trees under power lines or near underground utilities that could be damaged by roots.)

After that came the rather terrifying 2017 study of the city’s urban heat island effect, finding that Dallas was heating up faster than all American cities but Phoenix and Louisville. The city had not considered its canopy holistically, and about 37 percent Dallas’ land mass is covered in “impervious surfaces,” which is jargon for concrete: roads, buildings, parking lots, garages, you name it. One way to fix that? Be smarter about what you’re planting and where they’re going. And then maintain them.

“How do we take better care of the urban forest we have now and how do we grow it in a thoughtful and strategic way?” asks Matt Grubisich, Texas Trees’ director of operations. “It will be the roadmap that—if the City Council chooses to adopt and puts resources to it—shows how to move Dallas forward to maintain this asset.” 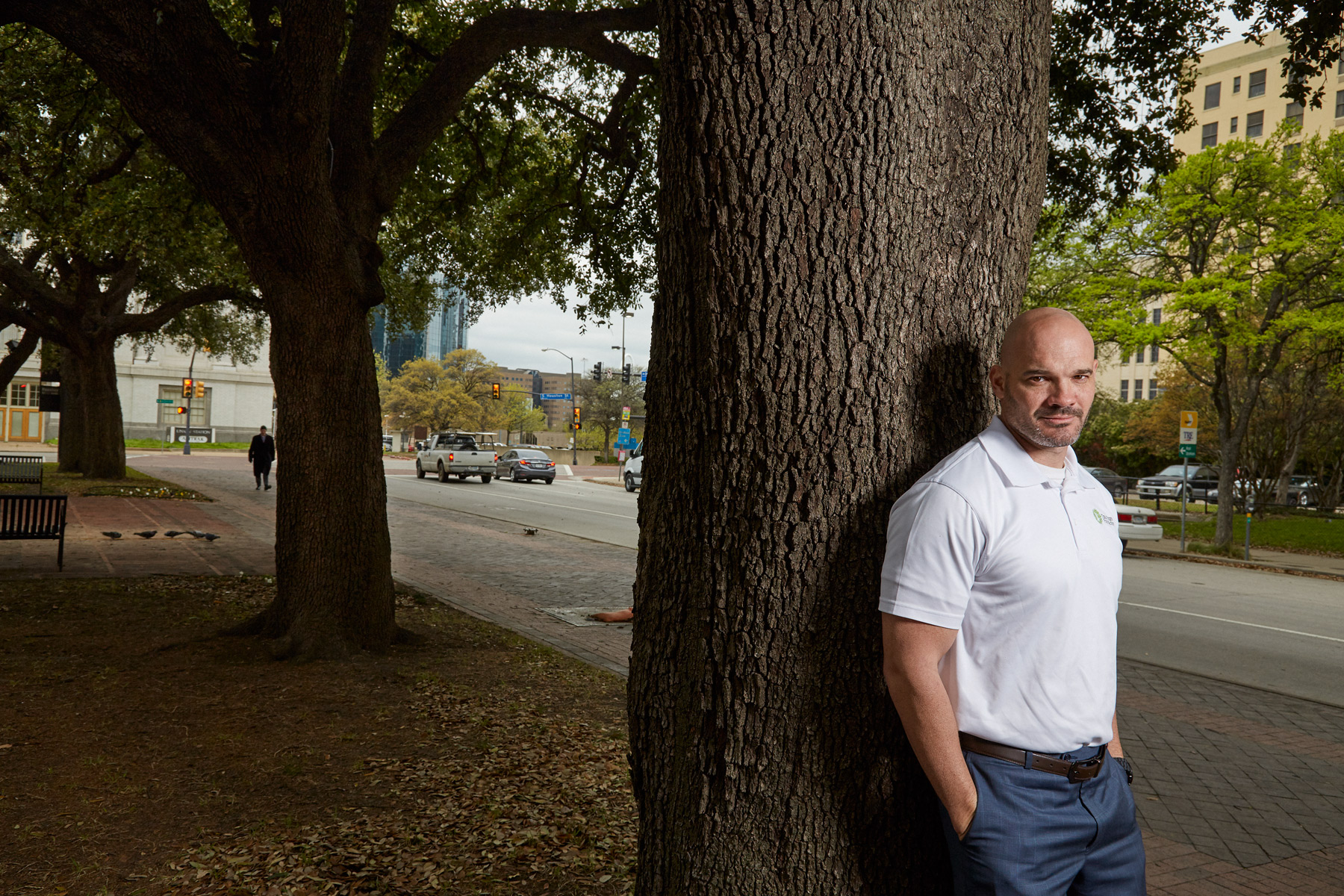 Grubisich anticipates the process to last about 10 months. The renowned naturalist consulting firm Davey Research Group will establish an advisory committee of stakeholders; he wants this to include everyone from Oncor and city staffers to the White Rock Lake-area hippie—that’s my word, not his—tree lovers. Davey will research all the city codes and charters related to tree maintenance and planting. They’ll interview each city department to figure out whether City Hall’s organizational chart needs some reconfiguring. For example, Grubisich says there are numerous foresters in different departments, like Water Utilities, Community Development, and Public Works.

“You guys are already spending a whole lot of money, so if you restructure this thing in a different way you may be able to do a lot of good with less money,” he said.

One of the reasons all those trees were uprooted in recent weeks is because of poor maintenance, according to Janette Monear, Texas Trees’ director. Many weren’t pruned the right way or often enough. They’re overwatered, causing the soil to saturate and the roots to migrate closer to the surface. When a bad storm comes, that’s a formula for uprooting.

“Straight-line winds, if trees are pruned correctly and taken care of correctly, they hold up really well,” Grubisich says. “They’re shooting from the hip right now.” 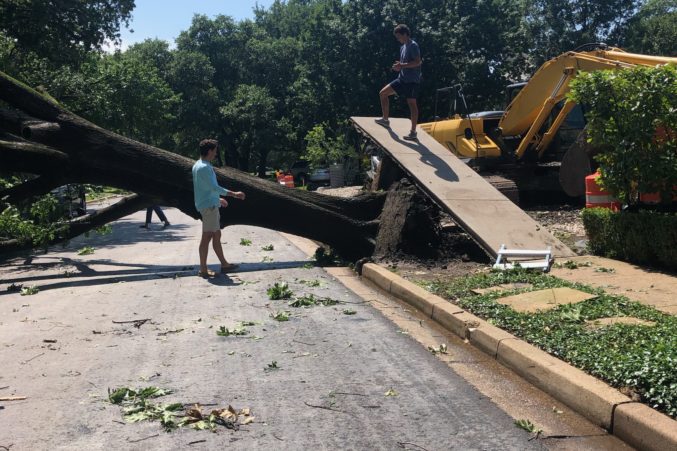 An uprooted tree in a neighborhood near Preston Road in Highland Park after the storms on June 9, 2019. (Photo by Anne Ziemba)

The major change will be buy-in from the city. As critics have noted, Texas Trees was the motivator in studying the city’s urban canopy and how improved management and smarter planning can mitigate the effects of climate change, particularly in concrete-heavy neighborhoods like the Medical District. Grubisich said it was important to have the city as a partner in developing this plan, to ensure that the processes it establishes will actually be followed. That’s why it was key for the city to pay for some of it. Cities that have had successful urban forest management plans—Grubisich names Pittsburgh, Sacramento, and Palo Alto—were born of a similar arrangement. The city is a partner, and vowed to adhere to its principles.

Pittsburgh will soon have a dedicated nursery to help the city replace what’s been lost to development. The plan guides where those go. New York City was able to map out a plan to spend $385 million over 25 years on things like monitoring, reforestation, and management. McGuire sees this initiative as the first step in equitably distributing natural resources to underserved neighborhoods in South and southern Dallas. And once trees get planted, there will be a process for long-term maintenance.

“There has been a lot of work done so we can drill into the areas of the city that are really suffering from the urban heat island effect,” he said. “It does include that statement you made about planting the right tree in the right place, and I would agree that we haven’t always gotten that right. A plan needs to address those things. But it needs to address these equity issues and this extreme heat issue so we’re not just again throwing trees in response to an individual’s demand, we’re doing it in a way across the city that makes good policy.”

The memo was paired with an announcement on the forthcoming Comprehensive Environmental & Climate Action Plan, which is how the city plans to improve its own energy footprint. If all goes according to plan, trees will finally be an important, intentional tool to help the city prepare to battle the ongoing effects of climate change.

There’s Nothing Like White Rock After a Big Rain

Yet Another Thing We’ve Screwed Up in the Trinity Forest