On Monday afternoon, Reverchon Recreation Center in District 14 was completely deserted. During one 45-minute period, not a single voter went in or out. No campaigners came out either. Despite it being a clear, sunny day—and despite the district’s contentious battle between incumbent Philip Kingston and challenger David Blewett—election officials said it had been slow. Only 68 voters had trickled in by 11:30 a.m.

Although early voting turnout outpaced comparable Dallas elections in recent years, the slow morning at Reverchon underscores just how difficult it is to get Dallas, the city with the lowest voter turnout in the country, to the polls.

The liveliest pitstop of the bunch was the Lakewood Library, another site in D14, which comprises parts of Uptown, downtown, and East Dallas. Voters streamed in slowly, but surely, last Wednesday, the second day of early voting. Campaigners for Blewett, carrying blue signs and flags, told passersby to vote for David and stay safe in the storms. The intermittent rainfall and tornado warnings in the area didn’t seem to deter them.

Blewett’s campaign, which scored 48 percent of the vote during the general election compared to Kingston’s 40 percent, is hoping to seize on claims that the incumbent’s combative style detracts from the Council. That style was recently called out by mayoral frontrunner Eric Johnson.

“Our daughters have kind of grown up together,” campaigner Melanie Buckholt said of Blewett, standing the legally required 100 feet from the door. “He’s a great family man, a community man. I just love him to death.”

In South Dallas, supporters of District 7 Council candidate Tiffinni Young, who previously held a slot on the Council, paced the sidewalks in a last-minute attempt to draw people into the Martin Luther King Jr. Core building. Few voters trickled in, but election officials inside said turnout was normal. A couple helpers hovered around the door, offering a hand to whoever entered.

“Are you going to vote today?” one official said to a man who was lingering outside. He nodded, and she put her arm around him and brought him inside.

Irungu Bakari, who lives in the area, voted for Young and then stood in front of the statue of Martin Luther King Jr., encouraging others passing by to vote. “I’m 65 and I voted in ’88 for Jesse Jackson, and it let me know that blacks need to continue to participate,” Bakari said. “It’s ironic that we’re standing in front of the statue that embodies the spirit of voting, the spirit of community. Not saying that people that aren’t in the community can’t represent us, I’m saying no one can save you for you but you.”

Bakari said he supports Young because he thinks someone from the area could best represent the needs of the neighborhood. During the general, she took 22.2 percent of the vote in the crowded race while her runoff opponent Adam Bazaldua, a teacher at Skyline High School, took 22.8 percent.

“To be honest with you, I like that she’s homegrown, so she knows the issues and the problems that affect our community personally,” Bakari said. “I think it’s so important to have a community person and not an outside person that bought a place in the community.” 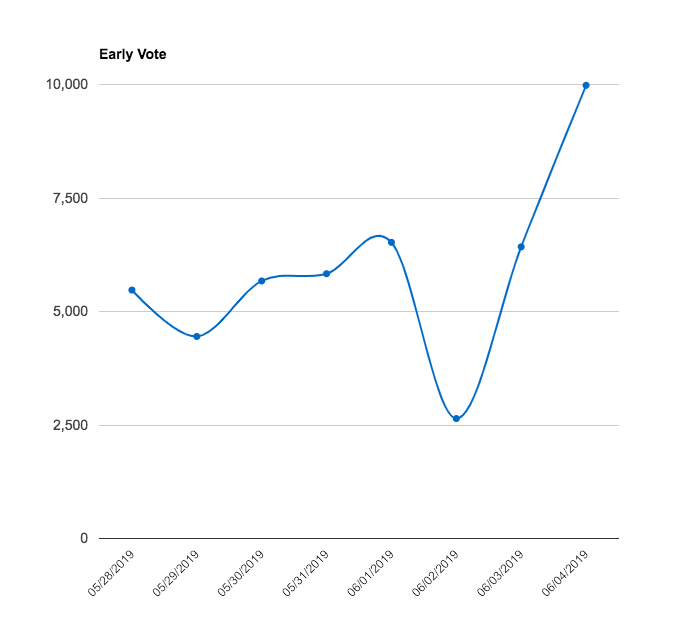 Our Redeemer Lutheran Church in Preston Hollow’s District 13 was similarly quiet on Monday afternoon, save for two notable campaigners for mayoral candidate Scott Griggs. Erica Cole and Jane Hoffman, who were accused of voter intimidation at the same location last week, sat in the 90-degree heat chatting with voters as they walked past. The two received attention when a voter complained to mayoral frontrunner Eric Johnson that she was intimidated by their presence at the site. Griggs spoke in defense of the women to the Dallas Morning News, saying they were “two of the sweetest individuals you can imagine.”

“I think if you watch the [debates], Scott is very supportive of the police and fire department and he said we have a crime crisis — duh! The crime problem in Dallas is horrible,” Cole told D Magazine. “I don’t want to be negative toward Eric [Johnson], but he says we don’t have a crime crisis.”

At District 9 polling site Lochwood Library, in East Dallas, voters streamed in and out during a recent trip, but no one had much to say about District 9’s tight race between Paula Blackmon and Erin Moore. The two candidates were only separated by five points in the May 4 general election. One election official, who has been working the location for 16 years, said it was the highest first-day early voting turnout he had ever seen.