Last week, a commenter on an encouraging post about the presence of scaffolding noted the mess of construction along Knox Street. As it just so happens, our founder Wick Allison was there over the weekend and took a photo. 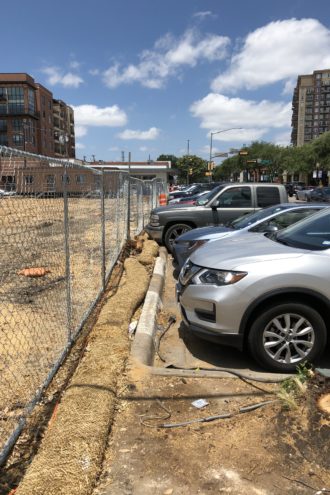 On Knox Street, just west of Cole, where RH has taken over the world, pedestrians be damned. (Photo by Wick Allison)

This is work for Restoration Hardware’s new “RH Gallery,” we believe, which combined eight lots into a 2.2-acre tract of land. RH hasn’t said exactly what will go there, but the city has certainly allowed their contractors to run wild. The sidewalk that was present has vanished, but the parking spaces remain.

You’re forced to walk across the busy Knox street to even get to a sidewalk. This appears to be the sort of thing that the city’s new ordinance was meant to address: that people can still walk next to your project while the work is happening. It can’t be that hard to push that fence back far enough to allow a place for pedestrians to walk that isn’t the street.

But, hey, at least the series ain’t dead yet.