Scott Griggs is late. It’s a little after 7 p.m. on Saturday, and early voting returns have just been published. The term-limited councilman begins in second place in the mayoral race, trailing only the state Rep. Eric Johnson. Everyone at Trees seems to understand that Griggs is set; turnout will be low, and the molehill of a lead Griggs has is probably still too much for anyone to climb. So maybe it doesn’t matter that he isn’t here, and that he won’t be here for another two hours.

The cocktail tables are full of supporters munching on tacos and nachos and trying to avoid dribbling the food on their phones, which are all zoomed into the county’s election website. The curiosity at this point is focused on Lynn McBee, the volunteer and nonprofit CEO who is behind Griggs by a hair under three percentage points. The other curiosity is Councilman Philip Kingston, Griggs’ closest ally who began early voting at a 200-vote deficit to former SMU football player David Blewett.

But first, McBee. District 13, the Preston Hollow enclave that has attracted voters like something resembling a magnet, has only a handful of precincts reporting. The collective wisdom is that high turnout in this district and its neighbors will benefit McBee and developer Mike Ablon, who lives there. Ablon’s immediately in fourth, about 800 votes behind McBee and just under 2,000 below Griggs. Only 45,635 people voted early. Eight hundred votes is a lot to make up when you’re spreading out votes like bird seed.

“I’m feeling good about tonight,” says Councilman Adam Medrano, another Griggs buddy who cruised to an easy victory in District 2. His face is in his phone. I ask if he’s worried about Kingston. “I mean, yeah, but we’ll be all right.”

Kingston is at the bar speaking to a few people, nursing a beer. “Let me talk to you a little later,” he says. Omar Narvaez is here, too. It’s sort of his celebration as well, a progressive bloc party. He was challenged in his West Dallas district by the woman he ousted two years ago, Monica Alonzo. Like Medrano, he won easily. “I declare victory already,” he says a little before 8 p.m. “I did what I came to do.” 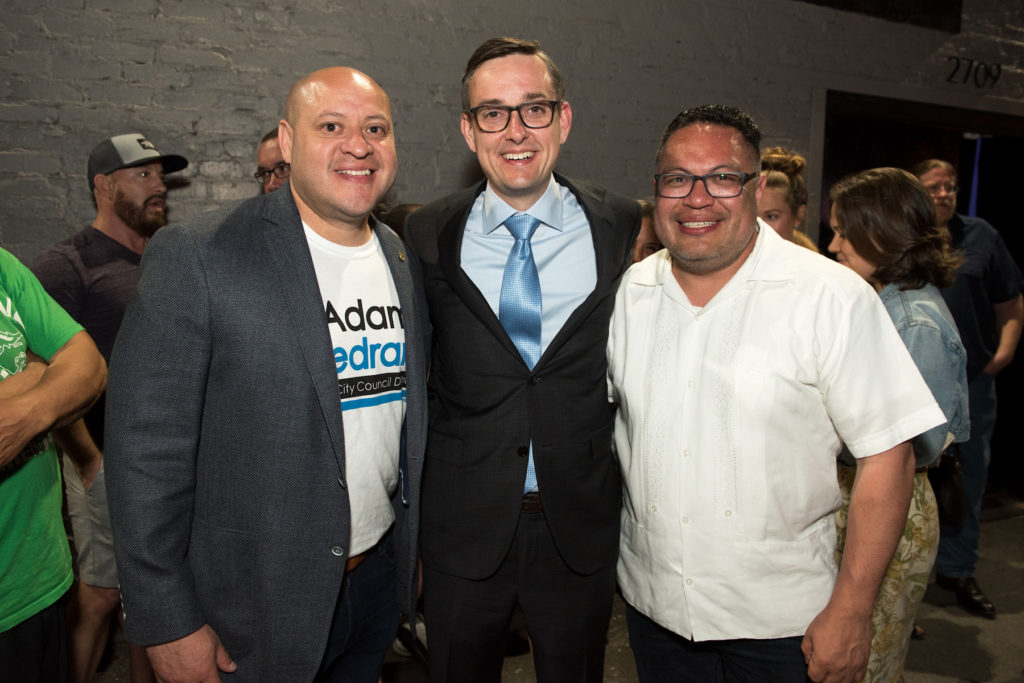 I order a gin and soda and do what the natives do: I stand at the bar and I reload the county’s election page. It is a slog; it’s almost two hours after the polls closed before precincts begin trickling in. Griggs, meanwhile, is still not here. Kingston finds me and Stephen Young of the Dallas Observer and gives us separate interviews. I am curious about his opponent, Blewett, who has seven kids. That is a lot of PTA meetings and dance classes and peewee football practices to spread your gospel of municipal kumbaya. Kingston does not take my bait when I ask him if he thinks this is an advantage.

“Honestly, his kids are so awesome,” Kingston says. He wants to talk about Blewett’s “very dishonest and negative campaign.” Mailboxes in District 14 became something of a weekly roast of Kingston. Warren Johnson, a Confederate monument-supporting bomb thrower, also ran to unseat Kingston and mailed a bunch of allegations about Kingston’s supposedly unethical behavior at City Hall: appointing campaign donors to boards and commissions, getting fined for missing too many council meetings and not exactly being excited to pay said fine. Kingston says Blewett was “almost using Warren Johnson as an attack dog.”

“All we have to really do to appeal to voters is correct the record. … [If you think] I’ve done anything other than really move the city forward in terms of progressive policies and innovations and actually fixing the streets and enhance transparency and accountability—if you don’t think I’ve done that stuff, it’s because I haven’t done a good enough job of telling you that,” Kingston says. “You have to look in the mirror in a deal like this.”

After this self-reflective lead-in, I ask Kingston if that includes analyzing some of his public behavior. It seems his City Council opponents run on a platform of Philip Kingston Is A Jerk every two years. The Dallas Morning News editorial board could publish a bound novella of the times it has called Kingston a jerk. For instance: last month he ripped up a colleague’s sick leave resolution during a meeting before confronting the mayor. This is catnip for Kingston’s haters.

“I definitely stand by responding negatively to unfair attacks against me, which happens all the time,” Kingston says. “But if I lose the ability to improve my behavior because I had too much ego or whatever else then I’m an idiot.”

Griggs shows up around 9 p.m., and McBee isn’t gaining. The TV cameras are here—three, from NBC5, WFAA Channel 8, and CBS 11, with Telemundo sharing 5’s—and set up outside on the smoking patio. This is only a drive-by; after Griggs, they’re going to Johnson’s party in Forest Hills and McBee’s in Trinity Groves. Griggs is being asked to speak into the future. He doubles down, saying at least five times in some variation, “We’re looking forward to the runoff.” He thanks the “engaged voters” who participated in “this pivotal election for the city of Dallas.” We’re at about half the precincts counted.

WFAA reporter David Goins asks him if he thinks the runoff will provide a “less muddled view” of him and his opponent. Griggs feasts on questions that he can answer with one word. The candidate says “yes” and goes silent. Goins, somewhat baffled, asks him to elaborate. Griggs just smiles. Finally, he says, “We look forward to really engaging debates and an engaging election and those differences coming out.” The cameras leave.

Back inside, a Rolling Stones cover band—The Stoners—is running through a suite of the band’s hits from the ’80s. It’s around 9:30 p.m. Blewett has hit 48 percent to Kingston’s 39 percent. The councilman and his wife have left. He’ll finish the night facing a runoff.

The conversation has shifted away from McBee and is now on Johnson. The state representative has been sort of a boogeyman over the proceedings this evening. Popular topics for small talk: How dark it is inside Trees, how confounding it is that Johnson is running. There is always a lingering sense of patience paying off with a run at City Hall. When someone disrupts that line of thinking, it throws the race out of whack. Johnson has been villainized by Albert Black, the businessman and mayoral hopeful who finished second to last. Here, he’s mostly questioned. Griggs’ wife, Mariana, says he’s done a fine job for District 100 but can’t make sense of why he’d want to be mayor. 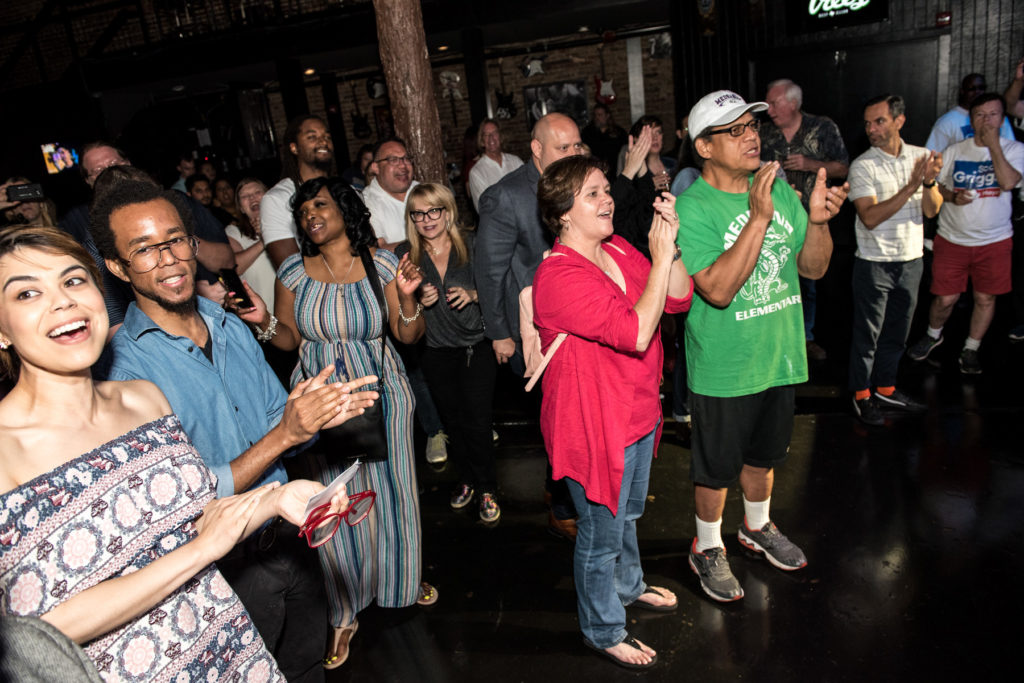 The stakes are indeed high. On Sunday, the Dallas Morning News’ Gromer Jeffers will quote political consultant Carol Reed as saying “it’s over.” Johnson has the money and the support from the north and the business community. Griggs is going to have to claw. His supporters are already discussing likely endorsements from candidates who didn’t make the runoff. Outside, Medrano tells Griggs he’s “going to wait and call Miguel on Monday,” referring to Miguel Solis, another opponent and a friend. Griggs is the back-to-basics candidate, the fight for the neighborhood type who keeps a watchful eye on spending at City Hall and advocates for prioritizing simple infrastructure fixes over big-time projects.

“We’re going to have to see where those candidates who don’t make the runoff, where their true values are,” says Jesse Moreno, Medrano’s appointee to the Parks Board.

Griggs takes the stage a little after 10 p.m. He dings Johnson without saying his name, thanking Mariana: “She attended 25 forums, more than some candidates!”

“This race, our campaign, everyone saw the reports coming out about money, we are not the campaign with a million dollars, nowhere close to that,” Griggs says. “But we are in this because we are not a campaign. This is a movement that believes in the people of the city of Dallas, and that is what has gotten us through.”

There has never been a more pivotal time to ask whether the people of Dallas believe in that movement.