Miguel Solis’ campaign ended where his career began. The mayoral hopeful and his treasurer, Chequan Lewis, started their Election Day by greeting voters about 100 feet away from the Thomas C. Marsh Preparatory Academy, the middle school where Solis realized he wanted to teach. Until then, on the advice of his mother, he had wanted to practice law. “I used to tell him that all the time, ‘You need to be an attorney because all you want to do is argue with me,’” his mother, Sherrlyn Solis, remembers.

That dream faded. The young teacher, inspired after serving as a staff member on President Barack Obama’s 2008 presidential campaign, found a home at the front of a classroom. Some of his students even joked that one day  young Mr. Solis would become president. First, he became the youngest trustee to serve on the Dallas Independent School District’s board. Now he wanted to be mayor.

“Hello, my name is Miguel Solis,” the 32-year-old candidate would say, over and over, always flashing an easy smile to passing voters. “I’m running to be your next mayor. I hope you consider me.” Some recognized Solis and shook his hand. Others smiled as they walked by. “Vote for Solis,” Lewis would add.

This dance between candidate, campaign treasurer, and voters repeated for the entire day. From the cool morning outside of Thomas C. Marsh that smelled of wet grass, to the breezy afternoon outside of Unity Church of Dallas. They stood under the shade of trees and used their hands to block out the afternoon sun. They killed time between pitching themselves to voters by quoting poetry—William Ernest Henley’s Invictus that speaks of an unconquerable soul and Tennyson’s Ulysses—and talking about the merits of the Wu-Tang Clan. From 7 a.m. to 7 p.m., Solis and Lewis stopped and visited no fewer than 10 polling stations.

It became Pavlovian. See a car and wave while wiggling that orange “Miguel Solis for Mayor, Together for Dallas” sign. See a person and say hello; if you’re close enough, shake their hand. “Hello, my name is Miguel Solis,” the candidate would repeat countless times, like he has for months.

The years of dreaming and talking, the months since January when Solis announced his candidacy at a small home turned community center in Dolphin Heights, was coming to an end. Perhaps, with this end, something new would begin.

“One of the things we’ve been talking about since we met almost 10 years ago now, “Lewis says, referring to Solis. Lewis, a Harvard Law school graduate who calls Solis his first friend in Dallas, ponders his words. After stopping mid-sentence, he begins again. “We spent a lot of time in this city thinking about what Dallas has been and we want to grab the reins to start steering Dallas toward what it can be.”

This was the hope. And their daylong, simple interactions with voters gave oxygen to those flames.

“We had to make a gamble early on,” Solis says, “we knew that our campaign was going to be running against people who could potentially self-fund, who had access to money from years of fund-raising for other people, so we knew we were going to have to win this thing with people power.”

This “people-powered” campaign helped raise more than a half-million dollars—the second-highest among the nine mayoral candidates when you don’t take personal loans into account. Solis was running a campaign at ground-level, the type of widespread strategy not often seen in Dallas politics. Here, candidates vie for the support of the business community and campaign hard in northern districts where voter turnout is likely to be highest. Solis took to the entire city, visiting churches and recreation centers and living rooms in all the districts. Few experts knew what to make of it; he was able to back up his platform with big dollars. But would that bring voters? Solis is a candidate who can say “I’ve always found politics to be an outlet for good” without bullshit.

There is something there, in those interactions between Solis and voters. Some wish him luck. “I voted for you,” others tell Solis, sometimes yelling it out of their car. One woman, the epitome of a loving grandmother, brought Klondike bars for Solis and Lewis. That cold treat helped them deal with the humidity left from a week’s worth of rainy days. Outside of Henry W. Longfellow Career Exploration Academy, they thanked her and hugged her and took a photo. 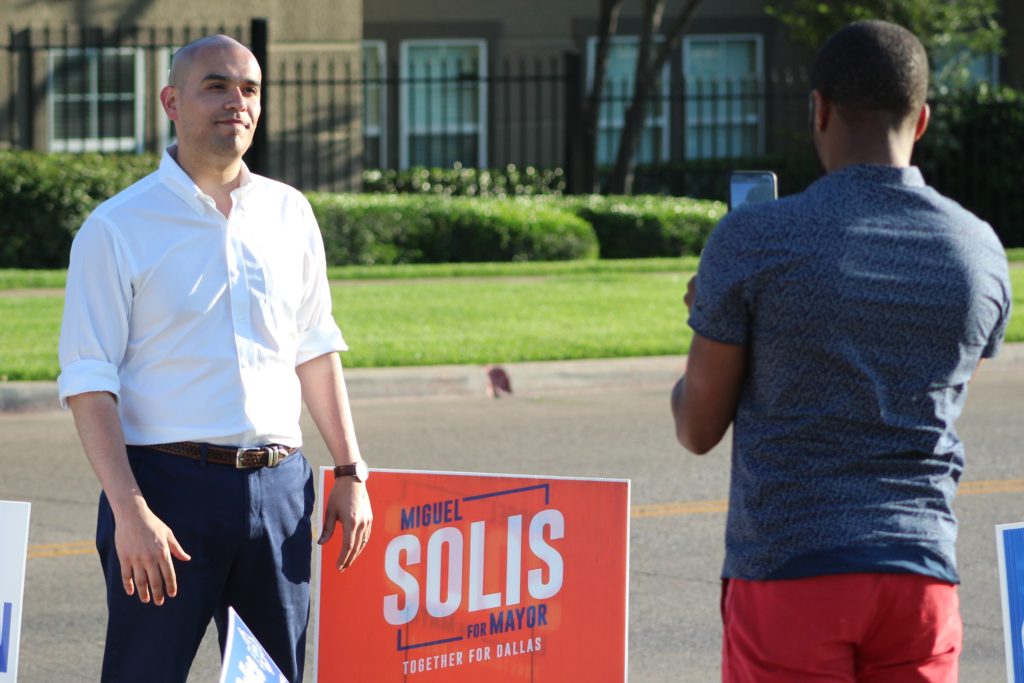 Treasurer Chequan Lewis makes a final video for social media before the polls closed on May 4. (Photo by Roberto José Andrade Franco)

Solis wanted to become not just Dallas’ first Latino mayor but someone who recognizes the city’s diverse set of experiences, ideas, and history. Solis aimed big in his messaging. He often spoke of knitting together a segregated city. “We’ve got to figure out a way to bring this city together,” Solis said, “and it’s going to take bold change.”

“You never want to lose anything,” Solis confides, “I think we’re all wired to want to win, to be successful in every venture of life. But I’ve learned a lot over the course, specifically over the course of being in elected office but with the things that I’ve experienced personally.”

It was getting close to 7 p.m. The polls would close and Solis’ watch party would begin. Solis and Lewis stood in an open lot near a house on the corner of W. University Blvd. and Roper St. for the final minutes, working for every vote.

“I appreciate you taking this ride with me,” Solis says to Lewis, both clutching orange signs. They fist bumped and recorded one last video. Solis speaks into the phone’s camera. Together, they watch the recording. They both nod their approval. A handshake between them soon turned into a hug. “Thank you,” Solis told Lewis, again. “Thank you,” Lewis responds. They then, like they’d done all day, drove to their next stop.

The watch party was filled with hopeful supporters. Solis anticipated a tough night. Early voting had him in the lower tier, sixth of ninth. He’d earned 9.89 percent of the vote, fewer than half of the leader, state Rep. Eric Johnson.

“Right now, I kind of have a sense of where we are,” Solis said during their drive. He walked toward a kitchen entrance of the Maplewood, a private social club inside a nondescript gray building off Inwood. “It’s going to take a lot for us to kind of break past the other people…just to get into second place. But you never know … We’ll take a look at it for like the next hour and then see.”

For that next hour, guests increasingly filled the small venue. Families with small children hugged other families already there. Young kids laughed and played. Other attendees nursed beers. Solis’ young staff and group of volunteers were there, as were his family and supporters, some of whom had hosted house meetings where Solis listened to community concerns.

Some supporters sat inside the rectangular building, others stood in the patio. They talked among themselves, trying to ignore their nerves.

“I am definitely nervous,” Eugenia Castañeda said, “but I am also very pleased with how we handled our campaign and all the hard work that we put into it.” Back in 2013, on the first day Solis ran for the DISD school board, Castañeda volunteered her help. She is now a finance assistant in Solis’ campaign. She is also one of Solis’ former middle school students who he inspired to dream.

“Even since I was in 8th grade,” Castañeda remembers, “[Solis] would write on my papers: ‘This is Princeton material, you’re gonna go far.’ He would do “Si Se Puede” (Yes we can) posters in the classroom. It made me realize that I could also do it and that I was also a part of that political world.”

While most waited anxiously, Solis remained in a separate room. He reviewed the voting results to see if he would, in fact, make it to a runoff for City Hall. As Solis watched and paced or did whatever he did, Chequan Lewis sat in a booth.

“I’m all in, emotionally, on this one,” he said. And now, he sat, sometimes slumped, while he nibbled on food. “Disappointed,” is how he described feeling. He cleared his throat and repeated himself. “Disappointed. And proud.” 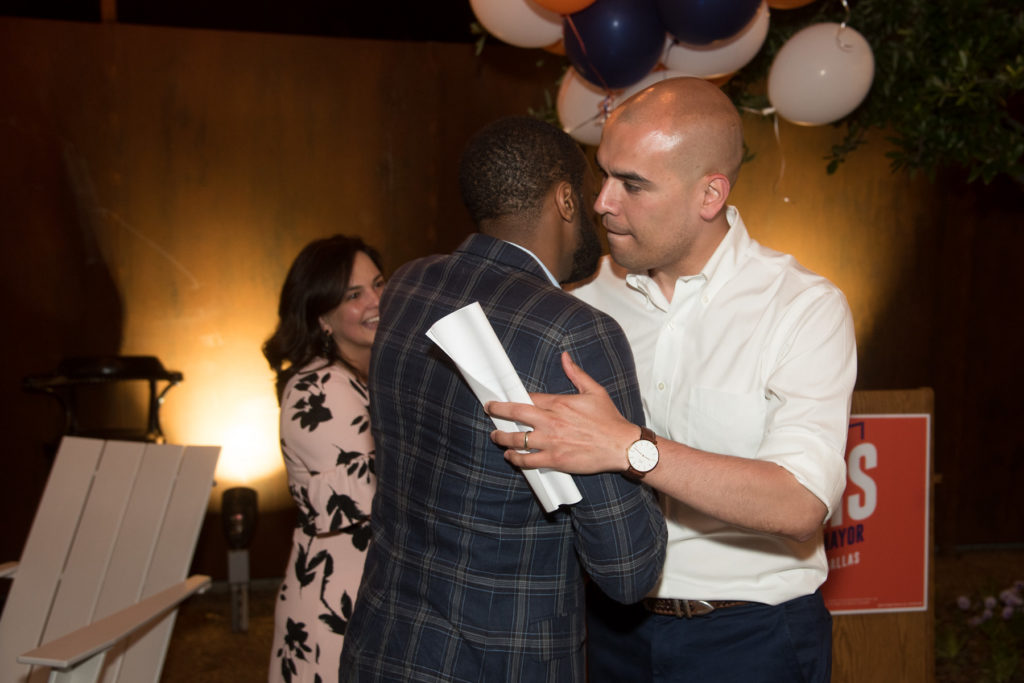 Miguel Solis embraces campaign treasurer Chequan Lewis near the end of his mayoral watch party at Maplewood Private Social Club on May 4, 2019. (Photo by Bret Redman)

The hours spent laughing and smiling and waving and shaking hands and reciting poems and lyrics seemed like another day. Also gone, at least for tonight, was the hope that the conversations between him and Solis would become much more than just talk. “We have spent the last seven years talking about how we can make this a better country. A better state. A better city.”

Gone, though, not dead. But, at least for tonight, not yet born either. And that—knowing their dreams would have to wait longer—was enough to hurt.

At about a quarter past 9, Solis spoke to about 60 of his supporters. “Though our campaign ends tonight,” he said, “the needs of our remain and the hopes for a brighter future still exist.” He shared quotes from Winston Churchill and Ulysses.

“I am forever changed by you simply by trying to become your mayor,” Solis said from a small podium. “As Tennyson once said through that great, weary sailor: ‘I am part of all that I have met.’”

Solis keeps a notebook filled with quotes from books and poems that mean something to him. Around the time his father died in 2009—his first week as a middle school teacher—his wife, Jacqueline gave him that notebook. You can picture Solis reading something, feeling it deeply and reaching for that old notebook. You can picture him repeating that quote to himself until he memorized it.

If you talk to Solis long enough, you’ll hear him recite quotes from memory. Hear him talk longer and you understand why, when he ends his speech by thanking everyone there, people—young and old, black, white, brown—rush to hug him. Some of them wait patiently behind others. Once in front of him, they put their hand on Solis’ shoulder and say a few words. Jacqueline stood next to her husband and wiped away tears as he gave his concession speech. So many eyes look glassy. In between whatever they say, Solis nods. He smiles, like he did all day, even if there is finally disappointment in his grin.