When Serra Marquez, Macie McKee, and Aishi Guha first came up with an idea to create a much-needed alert system for locked-out students re-entering their high school engineering building, the girls had no intention of taking the result to competition.

But that’s what they would eventually do, taking on and beating more than a dozen other teams in a statewide event where most of their opponents were boys.

The idea sprung up sort of naturally, during the group’s brainstorming sessions for a class project, with the three trying to concentrate over the incessant banging on the building’s doors. “It was kind of a lightbulb that went off, that this was the problem we should address,” says McKee.

Like every school in Irving ISD, the exterior doors of MacArthur High School automatically lock. Visitors check in through the only open door, at the front desk of the main building. That had long been a problem for students in the detached architecture, construction, and engineering (ACE) building. Students returning from the main building were locked out.

“This resulted in kids, well, kicking and banging on the big metal doors until someone heard them and let them in,” says Alex Dickey, who teaches inside the building. “Kids would get counted absent and get counted tardy because of this. In my first year teaching here, I was shocked that this was a problem, and that it had been going on for over a decade.”

With Dickey’s supervision, Marquez, Guha, and McKee took out the ceiling tiles of their engineering building, wired an alert system of their own design, and alleviated the nuisance. Now, students can hit the appropriate button outside the door to flash a light inside their classroom, alerting someone that there’s a student that needs in. The project will evolve over future stages to boost security.

The project impressed at the SkillsUSA Texas Championships STEM competition in Corpus Christi last month. Judges awarded the group first place in Engineering Design Technology. The girls competed against 13 other teams of three; they noticed only a handful of other girls competing. They will be continuing on to compete in the national SkillsUSA Championships from June 24 through 28 in Louisville, Kentucky, with phase two of their original design, representing Texas in the engineering design portion of the competition.

Dickey, who challenges students in his civil engineering course to think about solvable problems in their daily lives, says the students are “the ones that did 99.999 percent of the work,” and that his main contribution was to “make sure that they didn’t electrocute themselves and that they followed building codes.”

Dickey went to the school board to get the project approved, since the electrical aspect deviated from civil engineering. The students were able to use parts that the school had on hand, and Dickey helped the girls acquire additional supplies. He says that the costs of the lighting system were minimal, less than $50.

“MacArthur doesn’t really offer too many engineering-specific courses, and with civil engineering we are a bit restricted to that specific type of engineering,” Marquez says, “but Mr. Dickey actually let us explore other avenues, and that’s what actually started to get me interested in wanting to be an engineer.”

It wasn’t until Marquez saw SkillsUSA posters hanging around school that the assignment took on life as a competitive entry. SkillsUSA encourages contestants to solve real-world problems through innovative engineering designs. Marquez thought their work would be a perfect fit.

Guha says the group installed a transformer in the ceiling of their engineering classroom, and then got on ladders, removed the ceiling tiles, and ran wiring through the ceilings in each of the classrooms. She said that the group used parallel circuits, which makes the system more effective, because if one light shorts out, the problem is isolated and does not affect the other lights.

Besides running wiring throughout the ACE building, the girls also had to create a housing unit for the buttons that would be placed next to the exterior doors. They used a design software system and one of the 3D printers housed in the building to create a series of prototypes, before they settled on the final design. 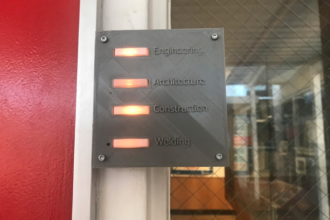 The students chose to label with subjects, not room numbers, to avoid confusion.
Sara Magalio

They chose to use a light system as opposed to a bell sound because the group figured other students would abuse the bell and cause further disruption. They also chose to label the buttons by subject, assuming most kids don’t remember room numbers. After a suggestion from judges, the girls added braille under each label.

In the next phase of their project, which they will present at nationals, the group will address security concerns involved with the system.

“One issue that they still have to tackle with the light system is who is at the door,” Dickey says. “Because when I send a student to the door, you know, it could be a masked gunman and not a student, so that’s part of the evolution of their problem.”

Guha says installing cameras is next, and that the group will consult with the computer science department to choose monitors for each classroom. There are additional costs associated with this phase, which Dickey says he’s helping take on.

In phase three, the students plan on installing solenoids, aka electromagnets, so that the teachers can remotely open the exterior doors after checking the video monitors, eliminating the need to send a student at all.

“We’re still consulting with our teachers and deciding on whether or not we should go through with this plan,” Guha says, “but we have decided on installing the video cameras. The solenoids will probably happen next year.”

Since McKee and Marquez, both 16, are sophomores and Guha, 17, is a junior, the girls have plenty of time at MacArthur to continue developing their system.

As they do, they hope to encounter more female engineers in the future.

“To any girls thinking about getting into engineering, I would say take a chance,” McKee says, “I definitely took a chance when I took this course. I had no idea what engineering really was, but in high school and middle school, that’s really the time to explore something new.”