Sedric Jones, 66, noticed the flames as he was walking down St. Paul Street early Tuesday morning. They were pouring out of the 115-year-old Ambassador Hotel.

“All of a sudden, a flurry of ambulances and policemen, everybody was blocking the streets off,” Jones said hours later. “The flame was coming out of the windows. The smoke is white now — it was black. I knew it was a fire. It’s a sad thing to witness.”

Jones is homeless, but has lived in the Cedars neighborhood on and off for the past 40 years. He says he never expected to see the structure come down.

Dallas Fire-Rescue responded around 1:30 a.m. Tuesday morning. The fire was under control by 5 a.m., according to the department. Nothing else burned, despite embers flying off the structure. By the time first responders arrived, the building was ravaged beyond saving. Much of the structure collapsed in the blaze, and what remains is set to be demolished sometime today by a company privately contracted by the developer. 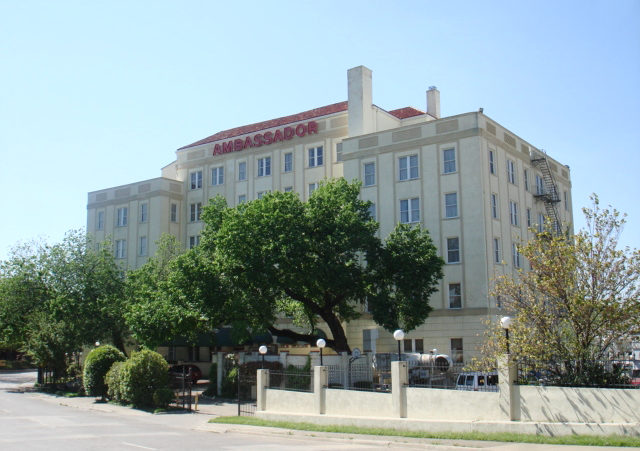 The cause of the fire is still undetermined, but the hotel was vacant and in the midst of a yearslong renovation. There were no injuries. Today, the air on the adjacent blocks was clouded with white smoke that could be seen on the other side of downtown. Police barriers prevented onlookers from going close to the site, but even from the street, the black char on the side of the building was visible. The building itself looked like it was crudely gutted; some of the outer walls stood, but the middle had vanished. Nearly half a dozen streets remained closed around the structure into the afternoon. Firefighters were still on scene into the afternoon, dousing the rubble in water with cranes hovering overhead.

Located on Ervay Street next to Dallas Heritage Village, the Ambassador was the oldest hotel in Dallas. It was recorded as a Texas Historic Landmark in 1965 and adopted by the city as a historic landmark in 1982.

Originally named the Majestic, it was built in 1904 as the city’s first luxury suburban hotel, designed in the Sullivanesque style made famous by architect Louis Sullivan around the turn of the century. It hosted the rich and famous as they came through Dallas, including three presidents. It has had many lives and owners since. It’s been a retirement home, a Christian school, and a movie set. After being vacant for several years, it was sold in 2015 to developer Jim Lake, who began renovations in 2017.

The goal: around 100 small apartments with a pool, ground-floor retail options, and a lounge. There had been some talk of a co-working space as well. With his wife Amanda Moreno, Lake has long been one of Dallas’ foremost preservationists, returning life to the old buildings in Bishop Arts, the Design District, and along Jefferson Avenue. The six-story hotel has sat in waiting for decades just south of the skyline, which was coated with smoke for much of Tuesday morning. 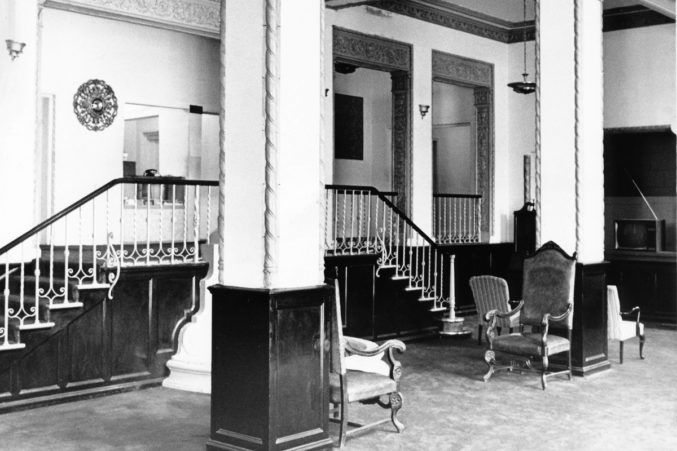 Ambassador Hotel lobby located in The Cedars district of Dallas.

Many in the Cedars had high hopes that the redevelopment would bring energy to a relatively secluded portion of the neighborhood. This part of Dallas has grown rapidly in the past decade partly due to the adaptive reuse of a similar project—Southside on Lamar, a retail, office, and apartment project housed in the old Sears distribution center not one mile away.

“(The Ambassador) was going to be a catalytic project for the neighborhood,” said Michael Przekwas, the head of the Cedars Neighborhood Association. “It was vacant for so long it just became a place where homeless people hangout, and that was the gateway to South Dallas. That’s what people saw. Putting an apartment building in there, bringing some new life to the neighborhood and some retail … that would have been a great node entrance for the neighborhood. I also think it would have drawn people across I-30, which has been a barrier for us.” 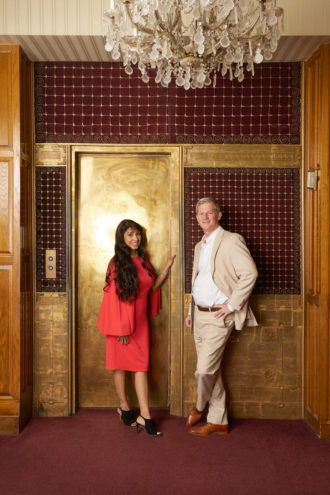 Redevelopment projects undertaken by the husband-and-wife team of Jim Lake and Amanda Moreno include the Ambassador Hotel.

He sees the fire and the demolition as lost potential and damaging to the historical character of the Cedars.

“I’m totally shocked,” he said. “That hotel has been the hope of the neighborhood, a beautiful gateway building. It’s sad that it’s going to be empty and it’s probably going to be years before it gets redeveloped into something.”

Lake and Moreno were unavailable to chat on Tuesday. But Lake spoke to D CEO in 2017, reflecting on his company’s mission and how the Ambassador fit within his vision.

“We are not just a real estate company,” he said. “We are from Dallas and want to make Dallas a better place … We are developing a brand to develop historically important properties for Dallas that we will not sell, so that future generations can continue to enjoy them. … We have always said we have a ‘double bottom line,’ we want to make money — and make an impact.”

And just before 4 p.m., the wrecking ball showed up to finish the job that the fire forced upon it.