VisitDallas has an interim CEO. The day after the city’s troubled visitor’s bureau parted ways with Phillip Jones, it has named Sam Coats to the role.

Coats is a former chair of DFW International Airport. He’s a corporate CEO-type who has been brought in for short stints to lead company turnarounds, including one at Schlotzsky’s in the mid-2000s. He said he wants to be out of this new role as fast as possible. He said he was first approached about the job in mid-April, that he’s not yet read the audit, but that he does not classify this as a turnaround job.

At a press conference today that got a little wacky before it even really began, board chair Mark Woelffer said Jones walks away with a $600,000 severance deal. Jones’ contract had four years remaining; his current salary was $700,000.

He leaves alongside CFO Matt Jones. Coats already has a couple of candidates in mind to take on the CFO role. His three top priorities: finding a CFO, working with the board to find a new full-time CEO, and getting VisitDallas’ contract with the city—due to expire in September 2020—renewed as soon as possible.

He also takes issue with the size of VisitDallas’ board. He said it would best function with between 11 and 13 members.

Mayor Mike Rawlings, who talked for a few minutes before scooting to a live interview with KERA, spoke to a need to improve on VisitDallas rather than start new. “There are some people that say the way you fix things is you just blow them up,” he said. “They have no experience in management.” Rawlings said the governance of the organization is “a bit unwieldy” and that a new Governance and Ethics Committee within the VisitDallas board will serve to turn things around. He said the committee will bring forward a new governance proposal within six months.

Asked about whether the next CEO would be paid a similar salary to Jones’ $700,000, Rawlings said that was up to the board but that “we’re going to have to pay a lot to get the next CEO. … I don’t care about paying a lot of money. I want excellence.”

Hence, why Coats wants to get that contract re-upped soon. “Why would somebody of that caliber come if there’s still a question mark?” he said.

Woelffer was adamant that it was Jones’ decision to leave, a decision that had nothing to do with the audit that took him and the organization he headed to task. Woelffer said Jones initiated the discussions about his resignation. “He thought that he had one more shot at doing something else and he said he wanted to move on, so we mutually agreed,” Woelffer said. Jones’ $600,000 severance will be paid out over 12 months. 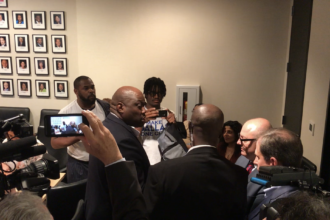 Bruce Carter and Frank Librio meet prior to the press conference.

The press conference was delayed about a half hour. As camera crews were stepping into place, a group of three young black men in white shirts that read, “Make Dallas One City,” were asked by a VisitDallas representative to join them outside the room. Bruce Carter, the father to a couple of the men, took offense to what he said was a singling out of the three. Soon the cameras had turned toward a heated meeting between Carter and VisitDallas Chief Marketing Officer Frank Librio. After Carter, who told the DMN earlier this year that he’s trying to be politics’ Lebron James, answered some questions in front of the cameras, a security guard appeared and asked him to leave. He refused. All four men stuck around for the presser.

Librio no commented prior to the presser, but told me later that VisitDallas sent a cease and desist letter to Bruce Carter 10 days ago over the styling of “Dallas” in his “Make Dallas One City” logo. He said he was simply trying to take the men out into the hall to identify them.