Councilman Philip Kingston got his wish on Tuesday to push back an evidentiary hearing over an ethics complaint brought against him, but the Ethics Advisory Commission denied his attempt to get the case thrown out.

The complaint, brought anonymously, is over Kingston planning to build a garage apartment at his Lower Greenville residence while simultaneously advocating for, and then voting on, an amendment to his neighborhood conservation district code that allowed it.

Social media activity included in the complaint show Kingston and his wife, Melissa, organized community events on the topic in September—the same month they submitted a conservation district work review form to build out the space atop their garage into an apartment. Emails also show the Kingstons pushing city employees to accelerate the timeline by which the amendment would pass. The amendment to code in the Belmont Addition—the district in which the Kingstons live—ultimately passed the City Plan Commission on November 15 and City Council on January 9. The complaint says construction on the flat started in January.

Kingston was an early advocate for the rentable, detached living spaces sometimes referred to as granny flats (in city parlance, they’re “accessory dwelling units,” or ADUs). He helped get an amendment passed last summer allowing individuals to apply for the flats or neighborhoods to band together to create overlays allowing ADUs throughout the neighborhood. But nobody in Dallas has gone through either process so far, city officials say, and Kingston spurred the Belmont Addition to skirt those processes in favor of an amendment to his conservation district’s code. 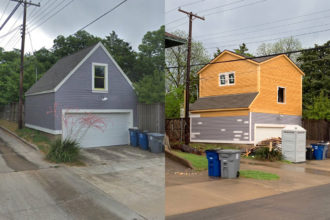 The garage at the Kingstons’ Palo Pinto residence, pre-construction and more recently, during.

The Councilman has called the complaint a part of “silly season.” He’s locked in a contentious battle for re-election in District 14, which encompasses slices of Uptown, Downtown, and East Dallas. And he’s downplayed the economic advantages that he stands to gain from the new construction, saying houses with garage apartments aren’t appraised at higher rates than those without. Pressed on whether renting out the apartment would constitute an economic advantage, Kingston said during a previous interview that he wasn’t planning on renting the apartment—before conceding he may eventually choose to do so.

On Tuesday, Kingston and his counsel, Victor Vital, argued that the case should be tossed on the grounds that no one had shown up to stand in on the other side. Because the complaint came in anonymously, the city auditor becomes the official complainant. Kingston says he has the right to cross-examine, and without anyone appearing on the other side, the case should be thrown out. The commission disagreed. But it did vote to submit in writing a request that the city auditor be present at the next hearing.

That hearing is scheduled for Tuesday, May 28. If the Commission decides there has been a violation of the city ethics code, it can recommend anything from a letter of admonition, voiding of prior actions, or a suspension or removal from office.