The shredder my wife and I got as a wedding gift a year ago has gotten a workout in the past two weeks. (Postscript: As a commenter informs me, this makes the mailers, um, not recyclable. We will not be shredding any longer, and i’ll be informing three of my colleagues who read this before publication and apparently were also unaware of this.) It’s been a mailer buffet at the Goodman-Arnold household. These campaigns are flooding the zone like Sprite ads, hoping you’ll choose their candidate when their name comes into focus at the polls. Most of them have been pretty tame. Endorsement lists, the candidate shaking hands, a glowing family photo. Others seem determined to piss off Philip Kingston. But I got one yesterday that made me think about the audience for these things. Who, exactly, is it? So let’s break these down and try to understand where the candidates are coming from. 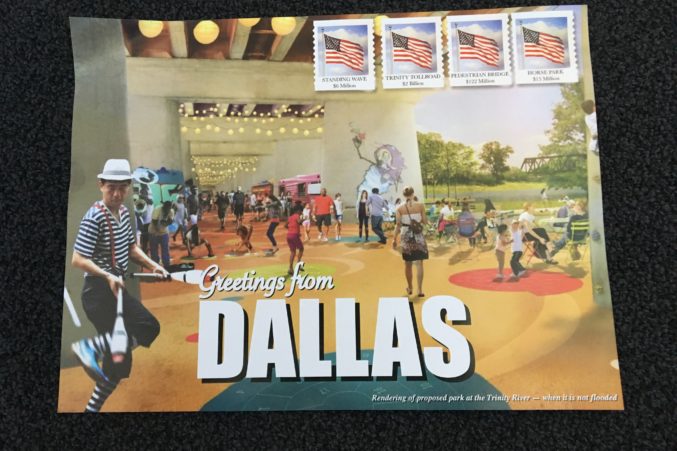 “Hello, homeowner. You’re a Griggs die-hard. You know the deal. Get angry and vote.”

This is the one that inspired this post. The people who know what this depicts are either already voting for Griggs, they’re weighing voting for Griggs, or they hate Griggs and will do what they can to prevent him from winning. Griggs is probably guessing this will be a low-turnout election and so he’s riling up his base to get them to the polls. But isn’t there a way to do it that isn’t so cryptic for folks who are unaware of this stuff? In Griggs’ defense, the other side of the “postcard” has his boilerplate of being “a new kind of mayor with a new set of priorities,” which is fixing basic infrastructure issues instead of spending money on “shiny objects.” But it still never tells me what the Standing Wave is. Or what this Horse Park is. Just that it is a “rendering of proposed park at the Trinity River—when it is not flooded.” Confounding. 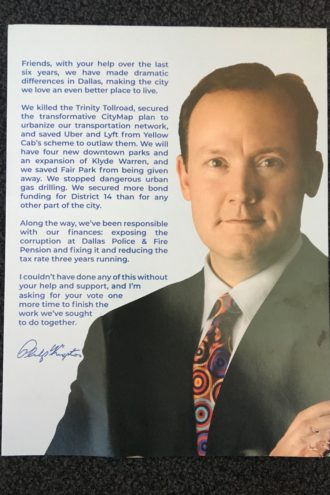 “Hello, homeowner. I’d like you to read a novella filled with jargon while I stare at you.”

CityMAP? The verbiage is a succinct description of TxDOT’s plan to rethink how our highways interact with the city, but it feels like a risk to even mention it. And, besides, it was a state-run vision and the city has done squat with it since it was published in 2016. I can confidently say without sourcing this that fewer regular folks have heard of CityMAP than they have the juggler under the overpass pictured in Griggs’ mailer. And if you haven’t heard of it, you should read my story in the May issue about it. It took me a few hundred words to explain it. I will now put them on a mailer. 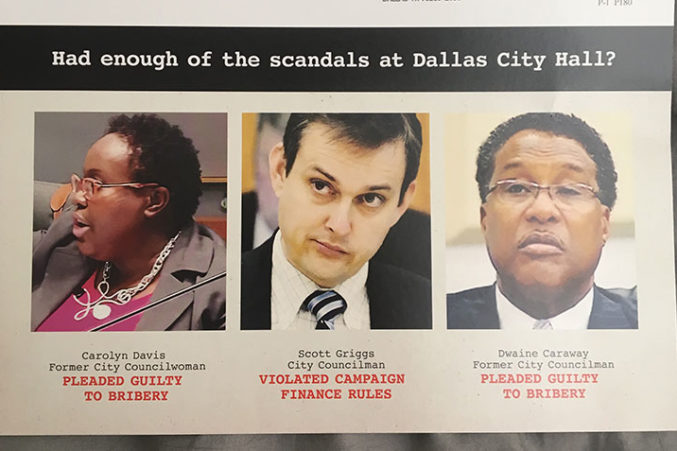 “Hello, homeowner. I want you to know that a candidate running against me is (*whispers* or might be) crooked.”

This one’s a low blow, but I respect its gall. This is election season, after all. It’s grouping Griggs, who says he unknowingly accepted campaign contributions from children and then later donated it, with noted criminals Dwaine Caraway and Carolyn Davis, who say they both took bribes. One is not equal to the others. One is not a crime. If you aren’t familiar, you have to read the ad close to notice. So I guess it’s effective in that sense. Outside of the mailers against Kingston, this is the ugliest one that’s gone out this season. And it was sponsored by Ablon’s campaign. 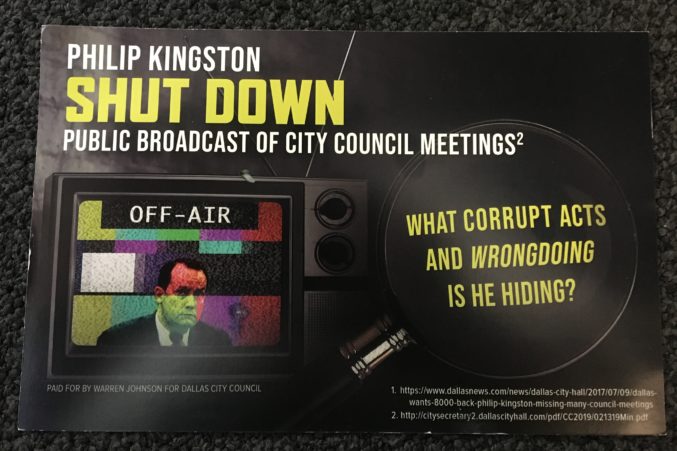 It’s safe to say that Kingston lives in Warren Johnson’s head rent-free. Johnson is a supporter of Confederate statues, so Kingston has been directly and indirectly trolling him for years now. This mailer is very Max Headroom, and the link to the sourcing is so small I’m not going to bother typing it all into my browser. If I’m not the healthily skeptical person that I am, maybe I do think Philip Kingston wants public broadcasts of meetings shut down and that he’s hiding something. Probably not, though. My guy, have you ever heard of a bit.ly link? 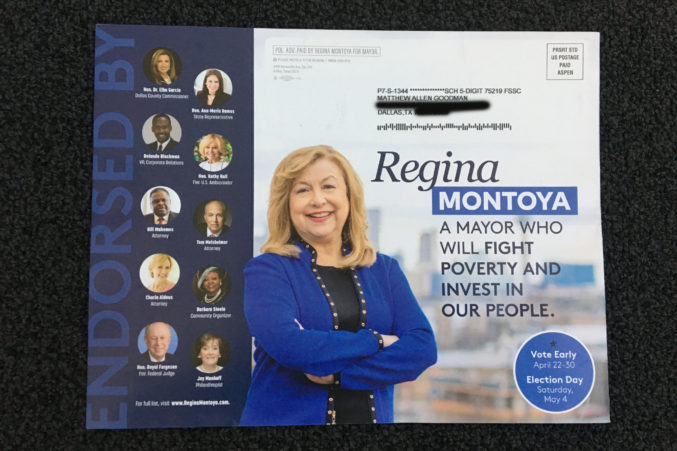 “Hello, homeowner. I am kind and confident and, to your left, you’ll see that all these people like me.”

This is about as standard as you get. A glowing Montoya, a list of endorsements (hi Rolando Blackman!), a note that she cares about poverty. A lot of notes that she cares about poverty, actually. She’s giving a hug on the other side of this, and it notes, in all caps, that she chaired the Mayor’s Task Force on Poverty. The inside is all poverty, too, including a few bullet points on her plans to invest in people. She’s also having coffee in someone’s home. She’s someone you can invite into your home. Won’t you invite her into City Hall? 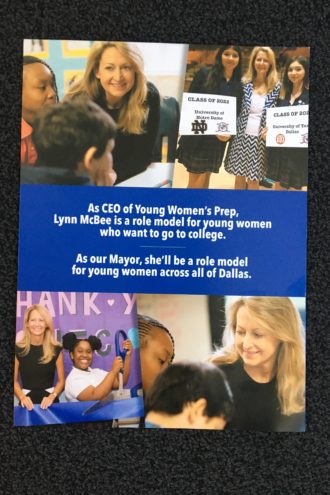 “Hello, homeowner. It’s time for a woman to run this city.”

The median age of Dallas voters was 62 in the 2017 election, according to a report by Portland State University and the Knight Foundation. McBee is clearly appealing to a female base and checking off her accomplishments to benefit students as CEO of Young Women’s Prep. It’s a smart move that will appeal to some of the people who show up to the polls and are influenced by mailers. 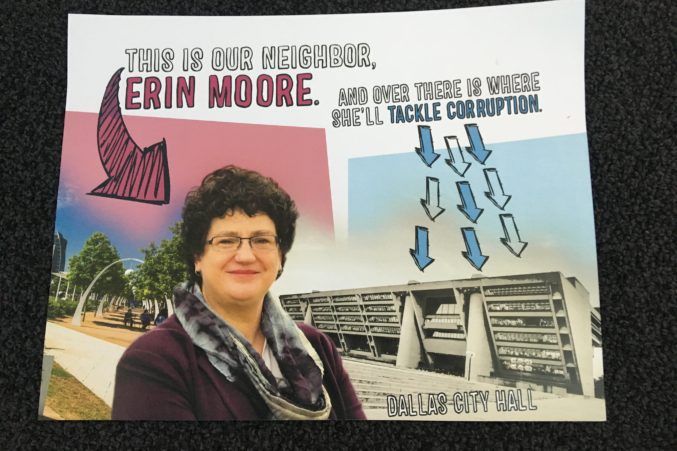 “Hello, homeowner. I have a simple message. And a clear photo!”

I like the design on this one. It’s light. She’s tackling corruption. She’s a neighbor. It’s broad, but, honestly, I just kind of dig arrows. Maybe corruption is polling as a high priority in D9. 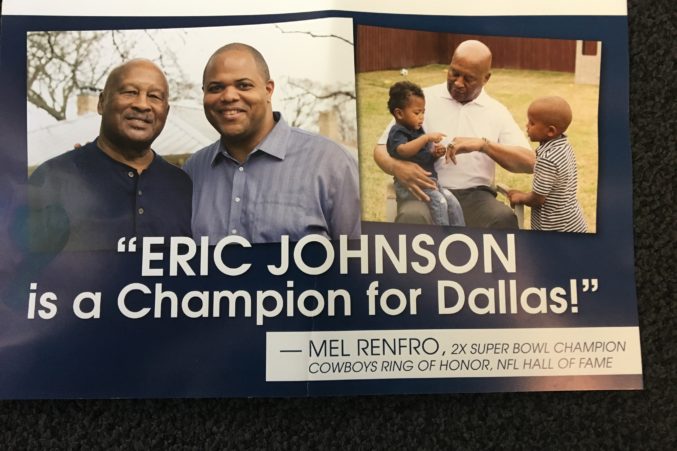 “Hello, homeowner. An ex-Cowboy supports me!”

The word “champion” shows up five times on the front and back of this mailer. Renfro’s Super Bowl ring is visible in two of the three photos. Maybe Johnson thinks he’s got this wrapped up? Does that mean he’ll stop calling me?