Bishop Arts, the 10-block district that came of age generations ago near a streetcar stop, has spent the last 30 years becoming a destination. There’s retail and restaurants and bars and coffee shops, the clean white paint of Oddfellows and the enormous butcher’s diagram of a cow that adorns Lockhart Smokehouse. Further south are narrow streets dotted with Craftsman homes, some of which have been sliced into duplexes and quadplexes. It all fits together somehow, a mix of uses born from a street grid, a trolley stop, and old architecture with good bones made for repurposing.

But this part of North Oak Cliff is changing. At some intersections, tall complexes now neighbor single family homes. This is perhaps because of Bishop Arts’ success and desirability, but also because of new zoning that allowed for these sorts of new builds. In 2010, the city cleared the way for larger commercial and residential structures along Davis Street. We are now seeing its result. There is a concern that this new direction is not for everyone, that longtime residents will become targets for deep-pocketed developers or succumb to the cost of rising property taxes. But proponents say it’s hard not to see the benefit: there are not enough apartments to meet demand, and the new developments allow people who work in the district to walk—or scoot or bike—to their jobs.

This is at the core of the battle for the District 1 council seat, which is open because of Scott Griggs’ departure due to term limits. Candidate Chad West, Griggs’ planning commissioner, has raised the most money in the race, and his signs are found often in Bishop Arts businesses whose operators say they support him because of Griggs’ endorsement. The artist Giovanni Valderas, who became known for placing sad-faced piñata homes in empty lots near new developments, believes he can represent the people he fears have been left behind by City Hall. Sylvana Alonzo, the wife of former State Rep. Roberto Alonzo and owner of a small marketing and web design firm, has made affordable housing the cornerstone of her platform.

How you feel about the direction of the neighborhood will likely guide your choice in candidate.

This is what many people see when they look at North Oak Cliff.

“There’s a lot of people in cities whose jobs aren’t paying what they need to be paying,” says Thor Erickson, the managing director of bcWORKSHOP. “Whether it’s tax increase burdens, or something happens to the home and it requires deferred maintenance, all of the things that can attack a person when you’re paycheck to paycheck. It can really hurt. And when a neighborhood is appreciating pretty quickly, it hits you and you’re not able to catch up, it affects you even more.” 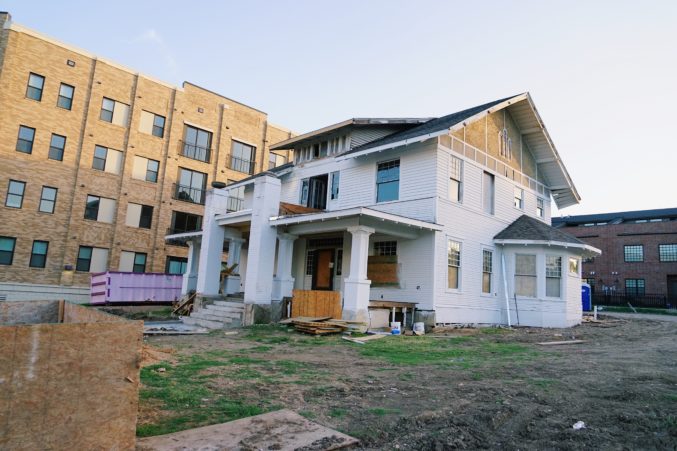 Oak Cliff, pictured here in 2018, where new development is colliding with old. (Photo by Creagh Cross)

Valderas says he has plenty in common with that person. He remembers his mother cooking dinner from a hot plate because his family couldn’t afford a stove.

“Like 80 percent of Americans do, they carry the burden when developers buy their apartment buildings and force them to move out in 30 days without notice, without a plan in place financially,” Valderas said to attendees at a campaign kickoff event. “How many of you could pack up all your things in 30 days and have a down payment and first month’s rent ready for a new place?”

West also expressed concern about the new development and the neighborhood’s preservation. As a member of the City Plan Commission, West says he has seen “how zoning can be used as a tool for good or for evil.” He says he is committed to preserving the single-family rooftops where he has lived for over a decade. He says he doesn’t want to see developers to plow them over in favor of higher, denser rental complexes. But he understands that bringing in more retail and other development also needs sufficient density to support it.

“Anytime there is a move to overdevelop a single-family neighborhood, that’s going to raise a red flag with me,” West said. “With that said, you can’t just say no to growth and economic development. What I’ve found that worked well on the Plan Commission is bringing those builders and bringing those developers to the table with the neighborhoods early on.”

He was an early advocate for the council’s support of renting out Accessory Dwelling Units, or garage apartments. He fought for a live-work ordinance that allowed for commercial spaces to also have a residential component. He wants to encourage transit-oriented developments and the redevelopment of older buildings—he identified the Westmoreland DART station as an opportunity in neighboring District 4, and he named a cluster of low-slung buildings at Clarendon and Hampton and the long-unused University General Hospital further south. He also advocated for providing flexibility to developers regarding affordable housing. He said he’d be open to allowing them to pay into a trust that can be used to subsidize affordable projects elsewhere in the district or the city instead of putting in a percentage of affordable units.

He had this analogy from a developer: “He said, ‘I would like to be able to put in 5 to 10 percent affordable units in however many apartments he’s going to put in, but I can’t make it work based on the numbers.'” Sometimes they walk away and go a different route instead of residential.

“Right now, the home prices in Oak Cliff are going up because a lot of people want to live here and we don’t enough rooftops, same with apartments,” West says.

But then what about the existing residents? Valderas says he would advocate for freezing property taxes for longtime homeowners in the district who may not be able to afford sharp increases. He wants property owners to shoulder moving costs if renters are displaced because the development is above their means. He also wants to give the renters a first chance at buying their unit before the building gets demolished. Alonzo says she’s found homeowners while canvassing who said their taxes have doubled and sometimes tripled. They’re concerned they won’t be able to maintain much longer. 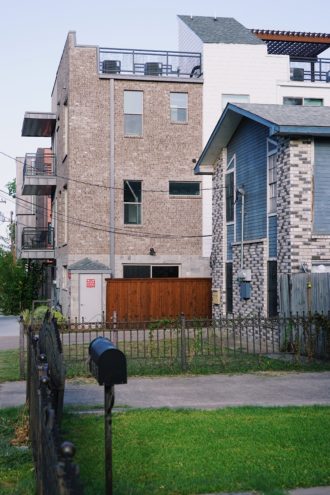 Oak Cliff, pictured here in 2018, where new development is colliding with old. (Photo by Creagh Cross)

Diana Pollak, 65, is the director of the Creative Arts Center of Dallas and a Valderas supporter. Pollak is a resident of Oak Cliff District 4, but her concerns with housing development in Oak Cliff have prompted her to follow this race. Pollak was among one of the beginning waves of people outside the Latino community to move into Oak Cliff, but she still believes that uncontrolled development of the community could cause it to lose its distinctive characteristics, and most importantly, its people.

“You look at 5-story developments in Bishop Arts that look like Uptown. It makes me sad,” Pollak says. “We have had a number of developers come in who have not kept their word. They’ve promised things to the neighborhood, they held stakeholder meetings and said they were not going to build more than three stories, and then they turn around and build five because they got a zoning change.”

Domingo Garcia, the LULAC president and a Dallas personal injury lawyer who served on City Council in the 90s, is also concerned about how the influx of apartment complexes will impact Oak Cliff. Garcia helped put into place a moratorium banning apartment complexes in the area, but this has since been lifted. He is wary of the long-term consequences of this development, which he believes will further perpetuate a cycle of poverty and dilapidation.

Garcia emphasized that in replacing homeowners with renters, the community exchanges individuals who are committed, lasting residents with transient tenants who are not invested in the growth and preservation of the neighborhood. This antipathy, he believes, results in a neglect in the new apartment complexes that ultimately leads to their deterioration and decrease in value over time.

Erickson explained that the apartment complexes that are cropping up all over Dallas are a national phenomenon.

“It’s that three to five-story apartment building with a garage wrapped around it,” Erickson says. “They’re easy to build, they’re semi-affordable to build. The profit margins are high, and there’s a building science out there that has found the right size and ratio to cost value, and they just go up like crazy. People like to finance them and developers build them pretty easily.”

Which is what the next council member is going to face. The concern among many residents is that North Oak Cliff is losing its character by way of the new developments. But there is also a demand issue in terms of new businesses and residents who want to live here but can’t find adequate space. How do you balance the two? It goes beyond a single project and expands into preservation of the neighborhood. Bishop Arts and Jefferson Avenue have appeal because of their character, which attracted developers who were passionate about retaining it. David Spence has made a business out of restoring these sorts of buildings, finding homes for restaurants like the Italian staple Lucia and creating apartments out of what used to be mansions. So too for Jim Lake, the developer who turned around Bishop Arts in the late 1990s, and Monte Anderson who has begun to work in Elmwood after success on Jefferson.

In 1990, 40 percent of the population here lived in poverty. The middle class fled. Thirty years later, it has returned, but is facing another problem—can the success of this neighborhood be shared by all?