Tonight, folks in Deep Ellum will notice something different about their neighborhood. Hopefully, it’ll be that even as the tipsy Thursday crowd grows more dense, the streets will remain much clearer than they normally would. But at minimum, Deep Ellum revelers will notice that Uber and Lyft drivers are dropping off and picking up their rides at five distinct staging areas, rather than providing door-side service to the district’s many restaurants and bars and clogging the streets in the process.

After planning that got going in earnest last summer, the Deep Ellum Foundation and the city today roll out their scheme to curb rideshare-induced congestion on the neighborhood’s major thoroughfares. Drivers awaiting a ride will line up along Main and Commerce Streets under I-345, stretching back toward downtown. Here’s your map of the five pick-up and drop-off points, in pink. Cars will idle in the green areas before being dispatched to the pinks: 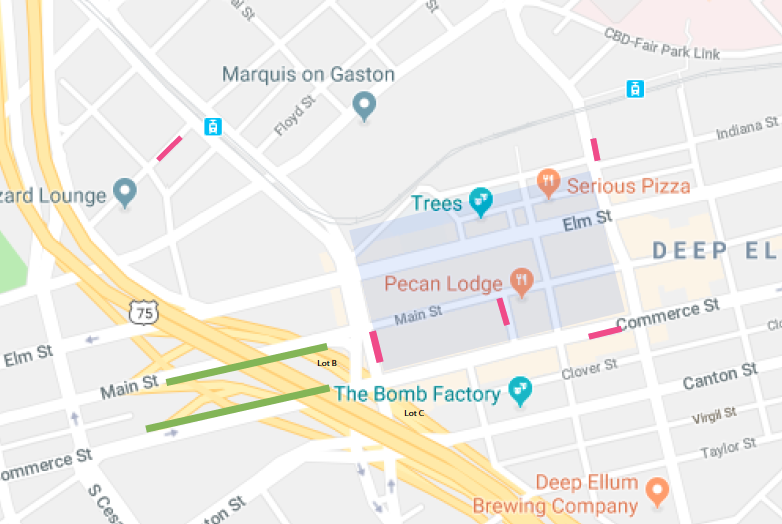 I wrote about the program in greater detail earlier this month. Anyone who’s spent a weekend night in Deep Ellum over the last year or two knows how difficult it is to get in and out. The Deep Ellum Foundation says that traffic congestions is one of the top concerns from the neighborhood’s many stakeholders, including the businesses in the area. Shoals Sound & Service Co-owner Omar Yeefoon told me he’s on board, and that he doesn’t think it’s too much to ask “for patrons to be picked up and dropped off in a certain place, as long as it’s a safe place.” Stephanie Hudiburg, the Foundation’s executive director, says the longest walk to or from a pickup point is about five minutes.

After a presser yesterday, Central Track’s Pete Freedman squeezed a few more particulars out of the city. Of note: off-duty officers employed by the Foundation will be charged with keeping drivers out of the no-idle zone, although it sounds like the apps will already be configured to shutout those drivers. The city also says the program is merely a pilot, one that could shift and change as it goes and will be reassessed after six months. This weekend, we’ll get a first glimpse.

Dallas’ most important news stories of the week, delivered to your inbox each Sunday.
Deep Ellum Lyft Rideshare Uber

The Memphis chain is a welcome Deep Ellum addition. And, importantly, the fried bird is spicy and crispy and good.
By Eve Hill-Agnus
Lifestyle

Dallas Retail Roundup: The Openings, Events, and Sales You Need to Know